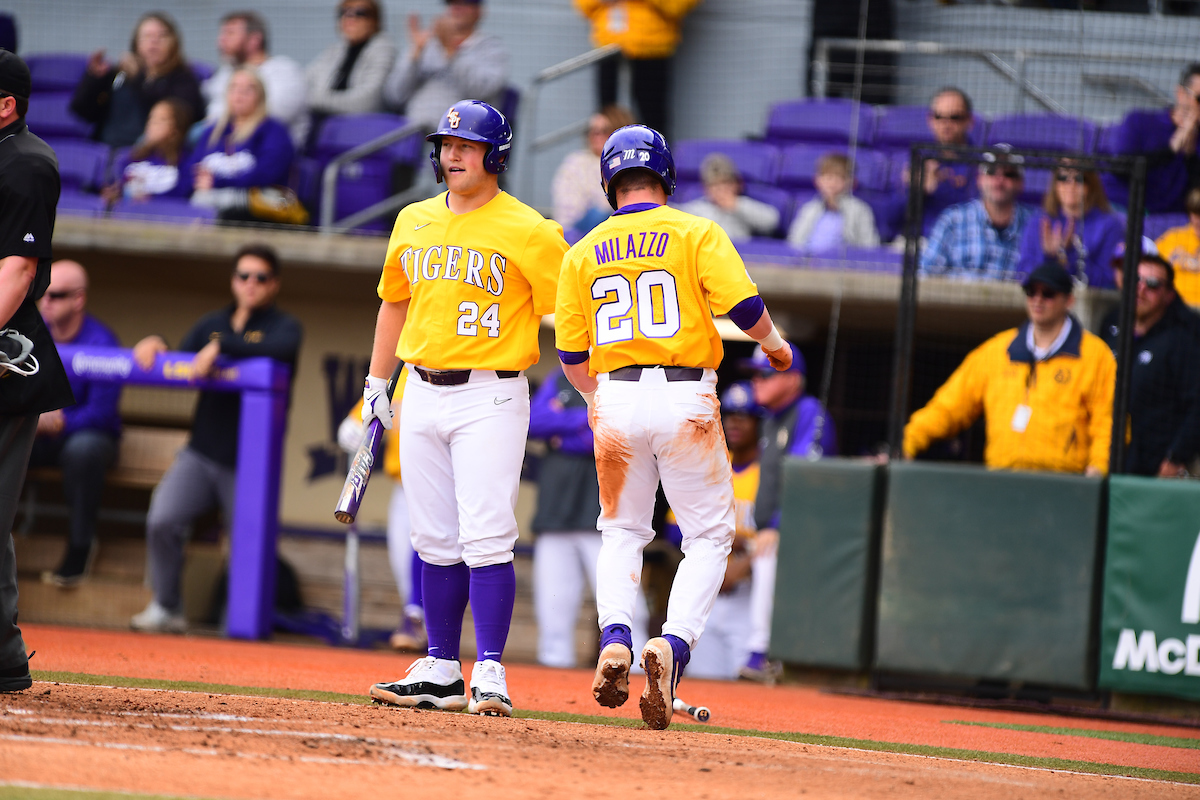 The rubber match victory improves LSU’s record to 5-3 on the season. Eastern Kentucky drops to 4-2.

The Tigers are back in action Wednesday night for a midweek matchup with Louisiana Tech. First pitch at The Box is set for 6:30 p.m. CT. The game will be broadcast on SEC Network+. Fans can also listen on 100.7 FM in Baton Rouge or online at LSUsports.net/live.

Labas (1-1) picked up his first win of the season in seven total innings  of work, allowing just two runs in the sixth inning. He allowed four hits with one walk and six strikeouts.

“I was just so proud of AJ today; he was working fast and throwing strikes,” said LSU coach Paul Mainieri. “AJ pitched the way I know he’s capable of pitching. I don’t care who the opponent is, when you make quality pitches and you throw strikes and you change speeds, you can get anybody out, and I thought he did a great job today.”

Milazzo reached on a fielder’s choice in the bottom of first inning and moved to third on single to right by Cabrera. Designated hitter Saul Garza then hit a sac fly to center that scored Milazzo from third. Cabrera stole second and Beloso hit an RBI single up the middle to give the Tigers a 2-0 lead.

LSU batted around in the third inning as the Tigers scored seven runs on five hits. Third baseman Zack Mathis, Milazzo and Cabrera hit three straight singles to load the bases before Garza drew a walk to bring Mathis home. Beloso followed with a two-RBI single that scored Milazzo and Cabrera.

With Garza at third, centerfielder Maurice Hampton Jr. singled to right to record his first career RBI. Garza scored and Beloso moved to third on the hit.

Shortstop Collier Cranford hit a ground out that scored Bianco from third to give the Tigers a 9-0 advantage after three innings.

Beloso lined another single in the fourth and reached second on a fielding error by second baseman Daniel Harris. Milazzo moved to third on the hit after reaching on a leadoff walk, then scored a run on a Harris throwing error. The Tigers held a 10-0 advantage after four innings.

“It’s a shame we lost the first game on Friday night,” Mainieri said, “but I was proud of the guys to come back and play two solid games. We had some good hitting today, which is very encouraging going forward. We’ve learned a lot about our team through the first two weeks, and we’re continuing to learn and make progress.”

Eastern Kentucky plated two runs in the top of the sixth inning. Centerfielder Michael Brewer drew a leadoff walk and moved to second on a single to right by right fielder Nick Howie. Catcher A.J. Lewis then hit a double down the right field line that scored Brewer and Howie to decrease the LSU lead to 10-2.

Junior left-hander Brandon Kaminer and freshman lefty Jacob Hasty each worked one inning of relief for the Tigers. Kaminer had two strikeouts in the eighth.

Eastern Kentucky starter Jake Lewis (1-1) was charged with the loss, as he pitched 2.1 innings and allowed seven earned runs and one unearned run on eight hits with one walk and two strikeouts.