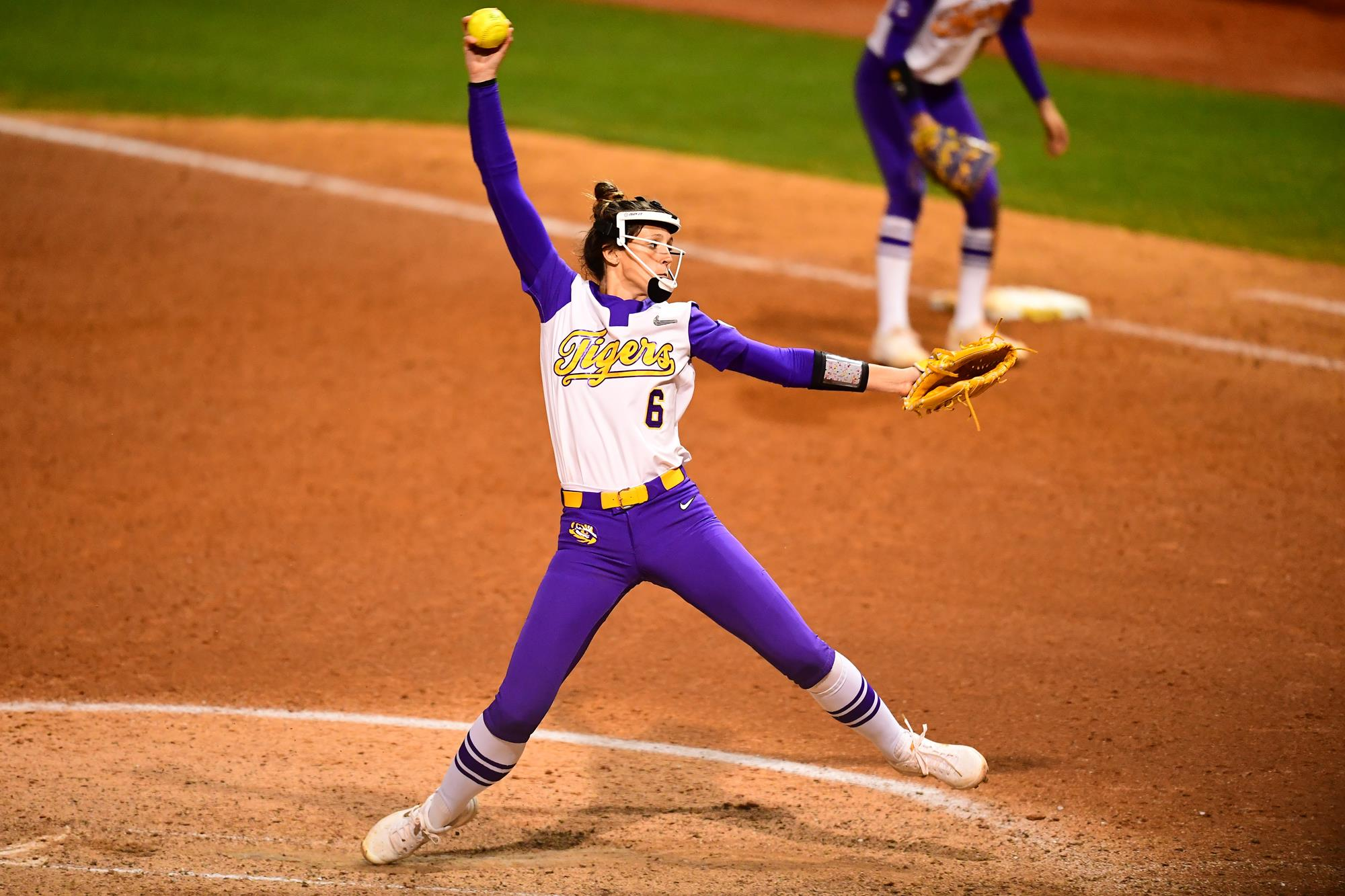 Maribeth Gorsuch threw a game that will go down in the record books Saturday night as she threw the first seven-inning perfect game in program history. She faced the minimum 21 batters and threw 21 first-pitch strikes. She struck out a career-high 16 including eight straight from the second through fourth innings.

After Gorsuch threw a 1-2-3 inning in the top of the first, the Tigers took a 1-0 lead in the bottom of the inning. Ciara Briggs put down a bunt and ran it out. The third baseman over threw first and Briggs went all the way to third. Georgia Clark walked and Briggs scored on the last pitch of Clark’s at-bat as it was a wild pitch, taking a 1-0 lead for the Tigers.

In the third, the Tigers put another run on the board. Andrews led off with an infield single, stole second and moved to third on Pleasants single to center. With two out, Sunseri hit a hard ground ball off the third baseman to score Andrews and make it 2-0, LSU.

Briggs made it 3-0 in the fifth as she stole third and scored on a throwing error by the catcher and Pleasants scored on a double play to give the Tigers a 4-0 lead.

Gorsuch improves to 3-1 on the year, while Brittany Kennett is charged with the loss, dropping to 1-3.

Sam Houston State got on the board in the first inning as the Bearkats loaded the bases and scored on a fielding error by the Tigers.

The Tigers answered by scoring 11 runs off four hits and an error. In that inning, the Tigers recorded eight walks. Aliyah Andrews led off with a walk and stole second. Taylor Pleasants and Georgia Clark had back-to-back walks with one out and Pleasants scored on Morgan Cummins’ RBI walk to tie the game 1-1.

The offense continued as Shelbi Sunseri hit a base-clearing double to left center to take a 4-1 lead. Taylor Tidwell followed with a walk and advanced to second on a Amanda Doyle single up the middle to load the bases. Savannah Stewart and Andrews tallied back-to-back RBI walks and Ciara Briggs singled to left to score Doyle. Andrews scored on an error by the shortstop and Briggs came in on a single by Cummins. The final run came across on a sacrifice fly by Sunseri.

After the one run allowed, Sunseri kept Sam Houston State off balance the next two innings. Taylor Edwards made her second appearance as a freshman. She allowed three runs in the fourth.

The Tigers scored eight more runs in the fourth to claim a 20-4 win, the most runs in the new Tiger Park.

Sunseri claimed the win in the circle to improve to 3-0 on the year. Darby Fitzpatrick was charged with the loss as she drops to 2-3 on the year.

On throwing a perfect game…

“It’s amazing but I have to give all of the credit to my catcher, my teammates, and my coaches.  Without their support none of this would be possible, we work hard day in and day out. The pitching staff was amazing this weekend, nothing beats the support from them.”

On being locked in …

“I was super focused and locked in. I have been working hard all week and all season, so I just went at them with confidence that comes from my teammates.  I was trying super hard to just stick to my routine, make sure I kept my breathing consistently which is really big for me.  I was worried about the batter and took it one pitch at a time.”

“It was special, it was a really awesome night for her.  She did some things that I’ve never seen in my entire career on a softball field tonight.  21 first pitch strikes is unheard of, I don’t know if I have ever been a part of something like that.  As nervous as I was in seventh inning knowing what was on the line, I just kept calming myself down thinking about what no matter what happens it was a great night for her.  She pitched as well as I have seen her.”

On the pitching staff as a whole …

“I think that the thing that is so tough about us is that they are all so different and are able to matchup with different offenses depending on what their weaknesses are.  We are able to put people out there in places that they can succeed in and that’s proving to be true.”

“It’s shocking honestly, I had no idea that was the case.  MB (Maribeth Gorsuch) has really embodied what this program means; we call it living tigers and she’s done it for her entire career so it’s fitting that she is the first one.”

Up Next
The Tigers will be on the road next weekend, competing in the Judi Garman Classic in Fullerton, California. The Tigers face Loyola Marymount, Texas Tech, California, Washington and Colorado State.