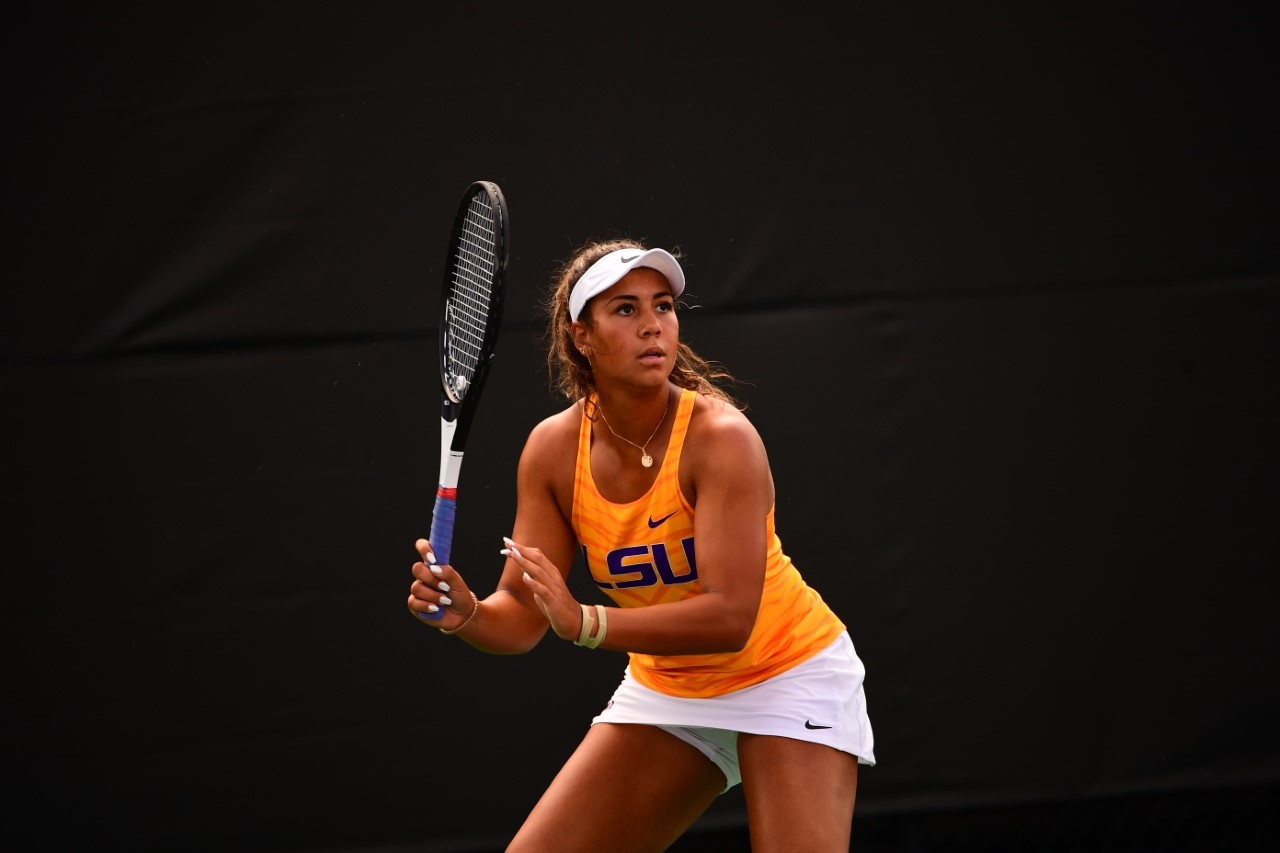 With the win, LSU moves to 6-2 in the dual season.

The Tigers struck first at the No. 2 doubles, where the English duo of junior Eden Richardson and sophomore Anna Loughlan earned their first win as a pair with an emphatic 6-0 sweep over the duo of Mimi Kendall-Woseley and Azul Pedemonti.

The Tigers clinched the doubles point when freshmen Safiya Carrington and Maggie Cubitt also earned their first win as a team, defeating Elena Tairyan and Jovana Vukovic by a score of 6-1 at the No. 3.

Cubitt was the first player off the singles court as she collected a 6-3, 6-0, win over Stephan Beloukovic at the No. 5 singles to notch her second win of the dual season.

Senior Paris Corley extended the Tigers lead to 3-0 at the No. 4 with a strong 6-1, 6-3, win over Pedemonti. The win takes Corley to five in the dual season, and a team-high 16 overall.

No. 75-ranked Carrington clinched the match for the LSU at the No. 2 when she defeated Sophie Gerits in straight sets, 6-3, 6-4. The win is Carrington’s 15th of the season, and third consecutive win in straight sets.

At the No. 6, Loughlan gave LSU a 5-0 lead after defeating Tairyan. Loughlan dropped the first set 6-2 before charging back with a 6-2 win of her own in the second set to force the ten-point tiebreaker. Loughlan controlled the tiebreaker and won 10-6 to grab her eighth win of the overall season.

No. 33-ranked junior Taylor Bridges earned her fifth win of the dual season at the No. 1, where she defeated Kendall-Woseley in three sets. Bridges swept the first set 6-0 before Kendall-Woseley replied with a 6-3 win in the second set to force the decisive third set. Bridges was ruthless in the third set, not dropping a game on her way to a 6-0 win to give the Tigers a 6-0 lead in the match.

Richardson completed the sweep with a win at the No. 3 over Phonexay Chitdara. A close first set that required a tiebreaker saw Chitdara take the first game 7-6(4). Richardson recovered from a slow start to take the second set 6-2 and force a decisive ten-point tiebreaker. The tiebreaker saw Richardson and Chitdara swap points back and forth before Richardson came out on top 10-8 to earn her seventh win of the dual season and give the Tigers their third 7-0 sweep of the season.

The Tigers conclude their away weekend in Houston when they take on the Rice Owls alongside the LSU men’s tennis team at 11 a.m. CT on Sunday, February 22, at the George R. Brown Tennis Center.