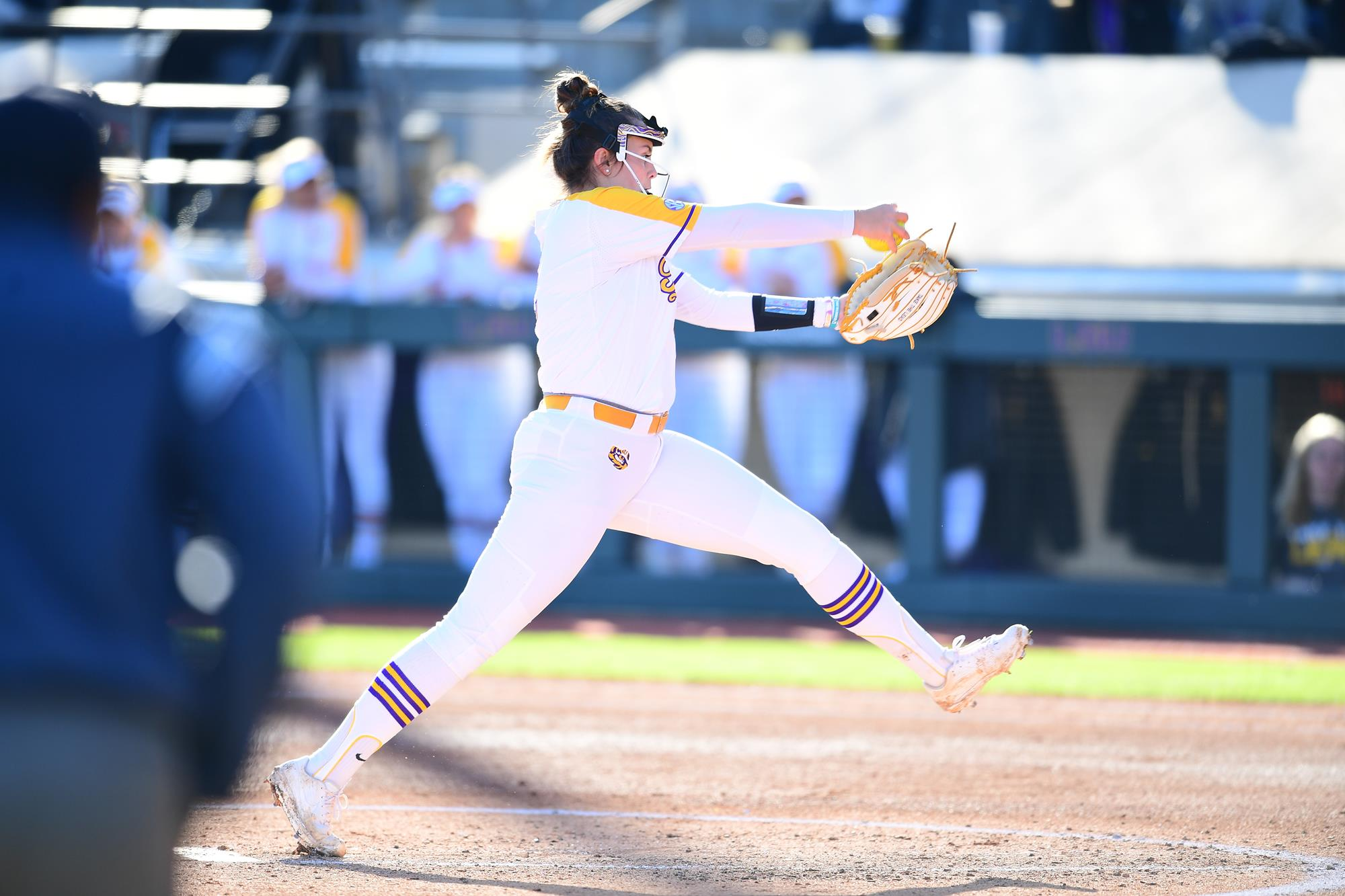 BATON ROUGE – The No. 6 LSU Softball team put together two run-rules on the night with an 8-0 run-rule of Belmont in five innings and a 12-0 five-inning no-hitter over Sam Houston State. The Tigers are now 11-1 on the year, while Belmont drops to 1-5. The two wins marked head coach Beth Torina‘s 499th and 500th in her career.

Starter Ali Kilponen was off to a hot start in the circle. She walked the first batter of the game, but came back to strike out the next three.

The offense was slow to start but the Tigers had a chance in the second. Georgia Clark led off with a 10-pitch at-bat that led to a walk. Shelbi Sunseri followed with a fielder’s choice to third and Clark was safe at second. The next three went down in order, ending the threat on a ground out back to the pitcher.

The offense exploded in the fourth inning as the Tigers scored six runs off four hits. Morgan Cummins hit a base-clearing double to take a 3-0 lead. Anna Jones followed with a walk and score on Aliyah Andrews triple to left center. Ciara Briggs followed with a double to left field to score Andrews, taking a 6-0 lead.

Kilponen improves to 4-0 on the season after her one-hit shutout. She allowed one hit and three walks, while striking out six on the game. Brooklin Lee was charged with the loss as she allowed eight runs, six earned, in 4.1 innings of work.

The offense continued into game two as the Tigers put up four runs in the first inning off six hits. Clark hit a line drive to second to score Briggs. Clark and Sunseri scored off a Cummins double to left center and the final run of the inning came off Doyle’s single up the middle, scoring Cummins.

Clark came up big again in the second inning as she hit a single up the middle to score Briggs from second and move Taylor Pleasants to third. Taylor Tidwell and Doyle hit back-to-back RBI doubles to extend the Tigers lead to 8-0.

More offense came in the fourth as Cummins hit her first career grand slam, taking the ball over the centerfield wall, her third dinger on the year.

Shelby Wickersham pitched a gem in the circle as she did not allow a run or hit for her second career no-hitter. She improves to 3-0 on the year. Karina Sanchez is charged with the loss and she drops to 0-1 on the year.

– Beth Torina collected her 500th victory in her career. She owns 371 at LSU.

– Shelby Wickersham pitched a no-hitter, her second career. She no-hit Tulsa in her pitching debut as a freshman, which she was the sixth freshman to throw a no-hitter.

– Morgan Cummins and Georgia Clark both went 3-for-4 on the day. Cummins hit her first career grand slam and had nine RBI in the two games.

– Ali Kilponen threw a one-hitter in the first game which was the second-straight one-hitter for the Tigers as Maribeth Gorsuch had a one-hit shutout on Wednesday.

Torina’s Thoughts
How does it feel to get 500?

Did any pitches exceed your expectations?

“They’re really talented. I mean, you can see just the movement both of them (Ali Kilponen) get. They’re so good in combination. The strength of this staff was just really awesome. They all knew their own pitch, and they all moved proficiently.”

Morgan Cummins has really been a collect hitter. What do you think about that?

How did you feel when you looked on the board and saw so many people saying nice things about you?

Thinking of the journey it took to be here, what do you think of this moment?

“Yeah, it’s really special, and Miriam (Segar) was in attendance today who hired me, which was really awesome to have her here, the person that gave me that opportunity. You know, that’s really special for me. So, it’s a really special moment, seeing my kids carry the sign out. You know the icing on the cake I guess. Knowing that we had them throughout those 500 wins too, and we’ve been able to do the whole thing is just something I’m really proud of.”

Shelby Wickersham
How does it feel to have another no-hitter on your record?

“It’s just awesome. You know, it just shows me how much a team puts in everything. Without my catcher Morgan (Cummins) behind the plate getting the calls for me , without our defense making the plays, without our offense scoring a bunch of run to cut the game short, you know without all of that, it’s less likely.”

The Tigers will face Sam Houston State Saturday at 2:30 p.m. and Belmont at 5 p.m. to finish out the weekend.