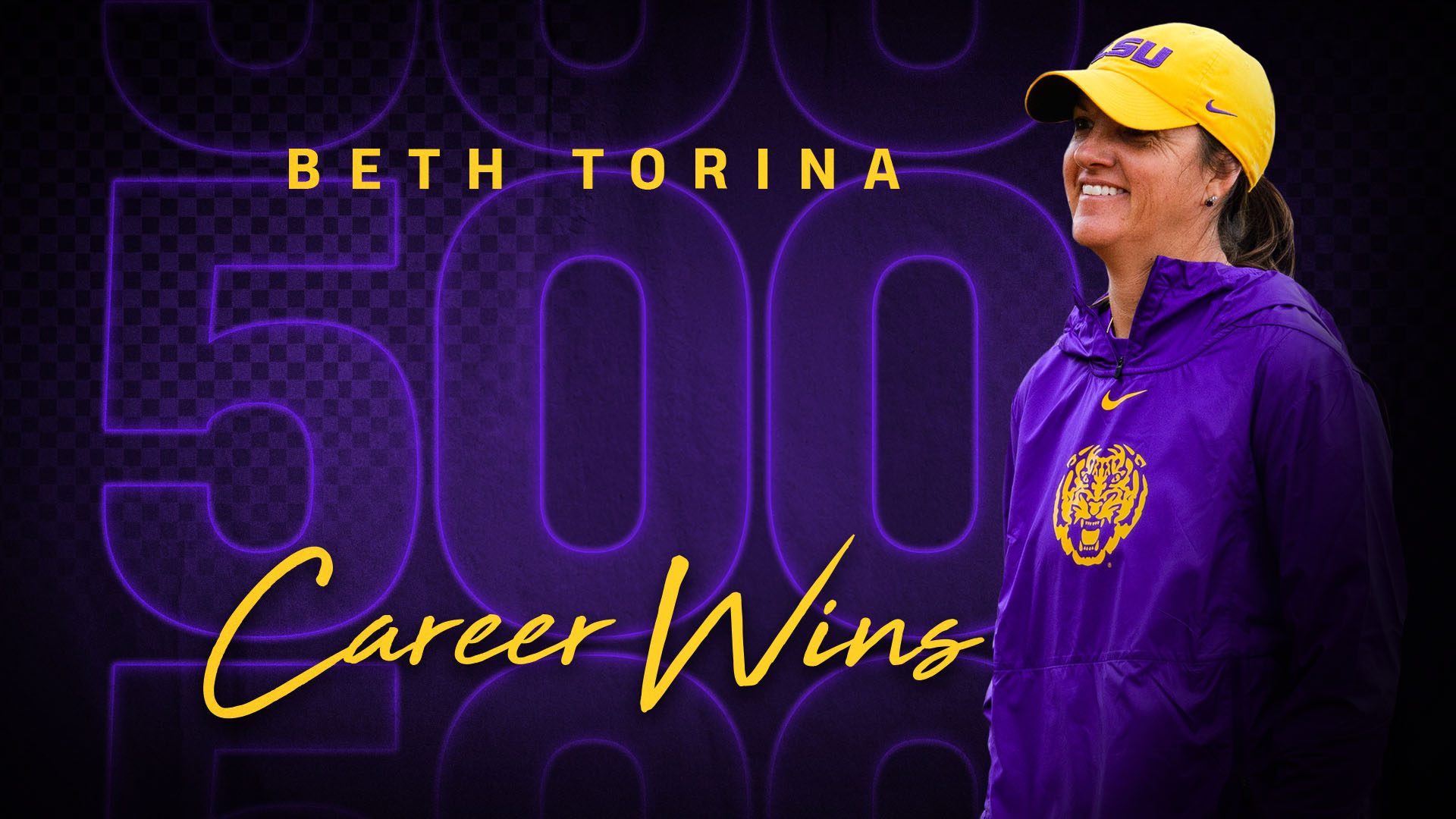 Beth Torina began to tear up as a video of messages from former players commemorating her 500th career win played on the big screen at Tiger Park following LSU softball’s 12-0 no-hitter over Sam Houston State on Friday night.

She celebrated with her players, staff, administrators, and, most importantly, her family. Torina’s three young daughters – Taryn, Tatum and Tenley – ran around the infield, each holding a digit indicating her milestone achievement.

“It’s a really special moment,” Torina said. “Seeing my kids carry the sign out is the icing on the cake, I guess. Seeing them walk out – knowing we’ve had them throughout the 500 wins too –  and being able to do this whole thing is something I’m really proud of.”

“I’m so incredibly blessed to be a part of that,” said sophomore catcher Morgan Cummins, who was 2-for-3 with a grand slam and six RBI. “She’s an incredible woman, and I am so honored to say she’s my coach. There’s nobody like her – absolutely nobody – and she inspires us every single day. She’s an amazing mother, she’s an amazing coach, and I’m just so honored to be able to play for her here.”

Torina’s run as LSU softball’s head coach has been a success since the moment it started in 2012. In her first season, Torina guided the Tigers to a 40-25 record and their third-ever College World Series appearance, becoming the first coach in school history to accomplish the feat.

The Tigers built off of the strong season in Torina’s first year by starting out the 2013 season 14-1, the best start for the program at the time since 2007, and ended the season with 12 wins over top-25 teams. After an eighth straight postseason appearance in 2014, Torina and the Tigers became one of top programs in all of college softball in 2015.

Since 2000, LSU is one of nine schools to reach the College World Series in three consecutive seasons and one of four schools to do so since Torina arrived in Baton Rouge in 2012. In her time at LSU, Torina has compiled a record of 371-156 in addition to her 129-111 record in four seasons at Florida International from 2008-2011.

Through her first eight seasons at LSU, Torina has coached eight All-Americans, and her players have won 16 national player or pitcher of the week honors.

And as many of those players like Brittany Mack, Sandra Simmons, Shemiah Sanchez, Allie Walljasper, and Sahvanna Jaquish said their congratulations to their former coach in video messages, Torina was able to reflect on all who were involved and what they have all done.

“It was really cool,” Torina said. “I was truly thinking about all the women that made it happen. All the people that pitched the games, hit the home runs, did the things that made all those wins happen and it is a really special group. So many women that I just love dearly and unconditionally, and it just makes me proud of all things they’ve accomplished.”