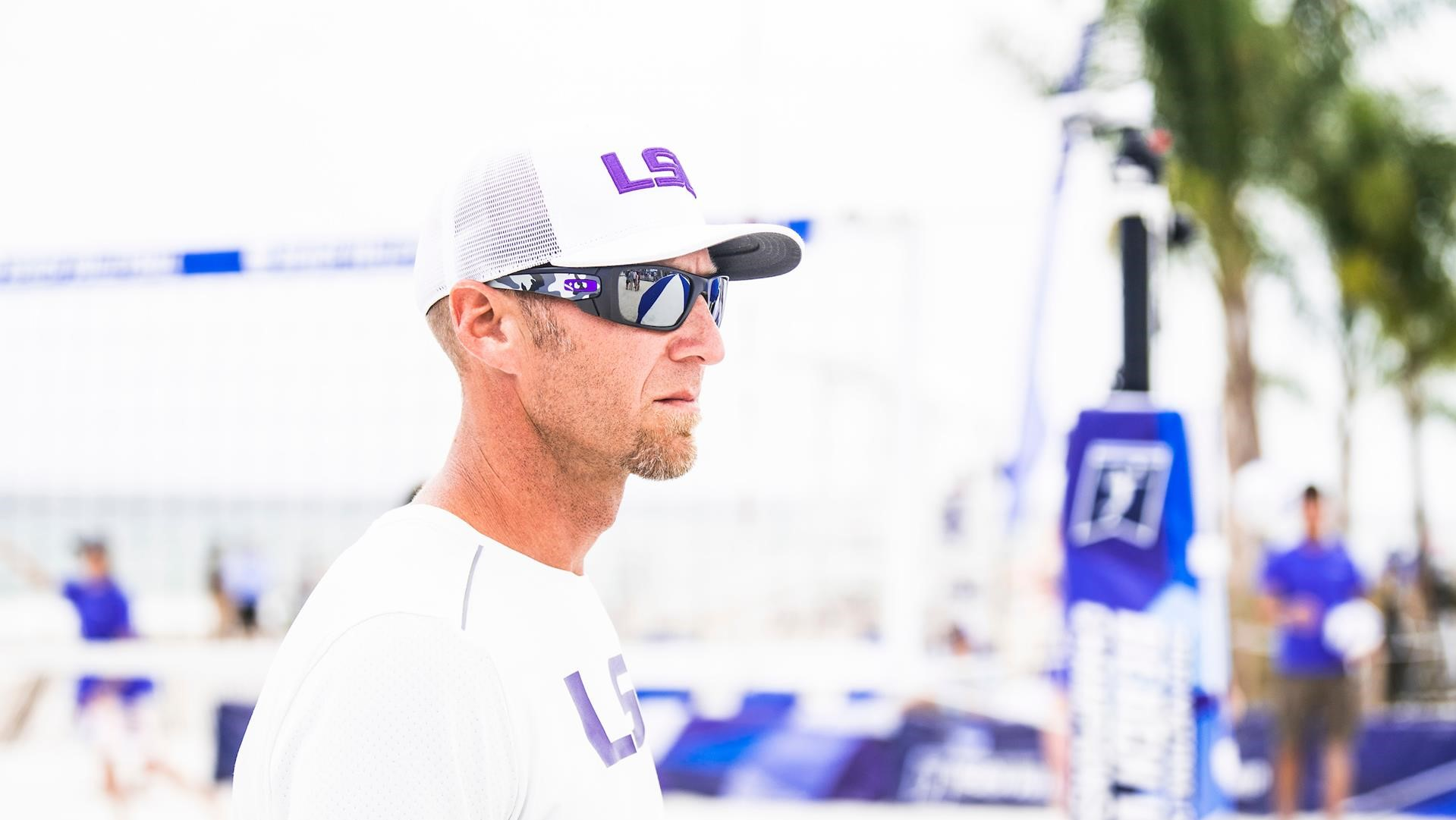 When then associate head coach Russell Brock and volunteer assistant coach Drew Hamilton met prior to LSU Beach Volleyball’s inaugural season in 2014, they looked at year seven, 2020, as a year where the team could really put a run together.

After longtime LSU indoor volleyball coach Fran Flory guided the beach team through its first three seasons, Brock took full control over on December 12, 2016. With a coach that was able to put all of his time and resources to the beach team, the Tigers began to take a leap into establishing themselves as a top-tier program in the sport.

Under Flory and Brock’s leadership through the first three seasons of the program, the Tigers improved their win total every year and as Brock took over the head coaching position he brought with him a mindset of constant improvement.

The 2018 season saw similar results – an appearance in Gulf Shores at the NCAA Championship and one win in the double elimination style bracket.

“We looked at this seventh year as the year that we would have the recruiting,” said Brock, “we’d have the experience and we could have built the program to compete where we want to.”

Now is the seventh year and the LSU Tigers are coming off their best finish at the NCAA Championships and the program’s reality is on a collision course with the expectations that have always been there internally, but now exist externally too, highlighted with a preseason No. 2 ranking.

Expectations Come From The Top

Russell Brock came to LSU with a vision and an understanding that to be great in the sand, you must be great in every area of your life.

Early on he instilled a culture of academic success and community involvement and as the athletic achievement has risen, he has still been able to maintain his culture of all around success.

He also knew that with a coaching staff of just three, including himself, he would need leaders within the team to step up.

The first three have been here from when the vision was just a concept. Coppola, Nuss and Powers can lead from a place that values all the hard work that has gone into turning this program into a national power because they were here when it wasn’t. It’s a historical relevance that unless you have lived through, you can’t fully grasp.

Rodriguez comes from a unique spot in that she played for Flory on the indoor side of things for four seasons before joining the beach team prior to last season. She may understand LSU better than anybody else on the roster and brings a special work ethic to the table

Kloth and Schaben are both Midwesterners who played indoor volleyball at great programs before joining LSU as graduate transfers. Kloth played for Creighton and Schaben played at Iowa State. Both of them have been able to bring pieces of their old programs and have infused that into the LSU Beach program in a special way.

This senior group is balanced and all six of them will have a chance to impact the 2020 lineup in a serious way.

“They have all come in day in and day out and worked so hard,” said junior Hunter Domanski. “It has really shaped the underclassmen and how our program has evolved.”

Schaben is the only new addition to the senior class this year with all of the other five playing major last season. What she lacks in experience though, Schaben makes up for with an intuition within the beach game  and an elite athleticism.

Perhaps no two Tigers exemplify this LSU program better than Coppola and Nuss. They have a 91-19 record together as they head into their senior season and are considered one of the top, if not the top, pairs in the country.

The long and lean Coppola paired with the crafty and quick Nuss make for a deadly duo in the sand, but despite their continued success in the sand, they keep pushing to be better and better.

According to Coppola, nobody leads by example better than Nuss. She says Nuss is always out on the courts getting other players to come workout with her and setting an example both for Coppola personally and within the program for years to come.

“The seniors have played a huge part in bringing this program to where it is,” said sophomore Ashlyn Rasnick-Pope. “They’ve done a great job of leading us and holding us accountable so we can keep our dream in reach.”

Developing great leaders has been crucial for Brock, but for his players – there is no other coach in the country they would rather play for.

“He is the reason I came here,” Coppola stated simply.

It’s an achievable goal and one that, if every player takes it to heart, can transform not just individual players, but the entire team.

Come in every day and be the best version of yourself and good things will happen. Positive peer pressure produces success. As the old adage goes, iron sharpens iron.

“It’s cool that everyone is willing to go out and give 150-percent every day to not only make themselves better, but the people around them better too,”  Rasnick-Pope said following a harsh cold and wet practice at LSU Beach Volleyball Stadium a week and a half before the beginning of the season.

When your top players are your hardest workers, it trickles down to the entire team where everybody is pushing each other to get one-percent every day. It fosters a culture of accountability that you are going to do your job to make me better and in turn, I will do the same.

“You’re pushing yourself day in and day out so that when the season does come around, you are playing at your highest peak,” said Domanski.

Accountability is just one piece of the culture that Brock has built and Domanski says another piece is trust.

Brock calls it a productive selfishness where players have to selfishly want to win for themselves with the understanding that it will ultimately help the team win.

“It means being able to go out and play for your teammates instead of playing for yourself,” Coppola explained about her coach’s term.

College beach volleyball is one of the few sports where individual success does not necessarily indicate team success and by competing every day in practice against each other, LSU has a tight bond of trust and confidence that all of their pairs will be able to handle their business when matches are on the line.

Brock’s constant mindset of improvement is a day-by-day task that is more a process than anything else. It’s easier to digest getting a little bit better every day than it is getting a lot better over a long period of time. It’s more tangible and it has translated to more wins each year.

Brock always expresses his goal to be better the next week than they are in the current week. He has always expressed a goal to improve each and every season.

Last season the team finished No. 3 in the country. His goals of improvement have not changed.

Expectations Come From Doing Whatever It Takes

On the surface, the team’s slogan, Whatever It Takes, seems pretty simple.

For Domanski it means going to get the win no matter obstacles the team must navigate throughout the course of each match.

She will be a junior this season and has played a critical role in LSU’s past two runs to Gulf Shores.

Rasnick-Pope believes those three words translate to coming in to practice every day and giving the last ounce of energy you have after busting it in class all day. She takes the ‘one-percent better every day’ mantra to heart.

Coppola likens Whatever It Takes to her personal style of play.

“I am not conventional,” said the senior star. “I flail my body all around and do whatever it takes to get the ball up, whether it’s doing the splits or landing on my back.

“I’m going to do whatever it takes to win for LSU.”

Brock says the phrase encompasses what it seems to mean on the surface for sure, but he believes it also has a deeper meaning.

“Whatever It Takes,” he says, “means we have responsibilities to do what we’re supposed to do.

“When we bring everything we can to the table, favors may fall in a way that end up putting us where we want to be at the end of the season.”

The most talented roster in program history also might be its most united. It’s a team that holds each other accountable and to a high standard from top to bottom.

On Saturday, LSU looks forward to seeing what it can prove when it faces three top-20 teams in Hawaii. The Tigers are excited to show everyone the greatness they see every day in practice and they are hungry for more success.

“It’s not like we’re pushing for it or trying for it,” said Rasnick-Pope. “We know we can do it. We just have to go out there and get the job done.”

LSU Beach Volleyball sits right where Brock thought it would as the Tigers head into their seventh season. With consistent improvement over the past six years, LSU’s reality has collided with its expectations.