LSU Wraps Up the Regular Season with the LSU Twilight 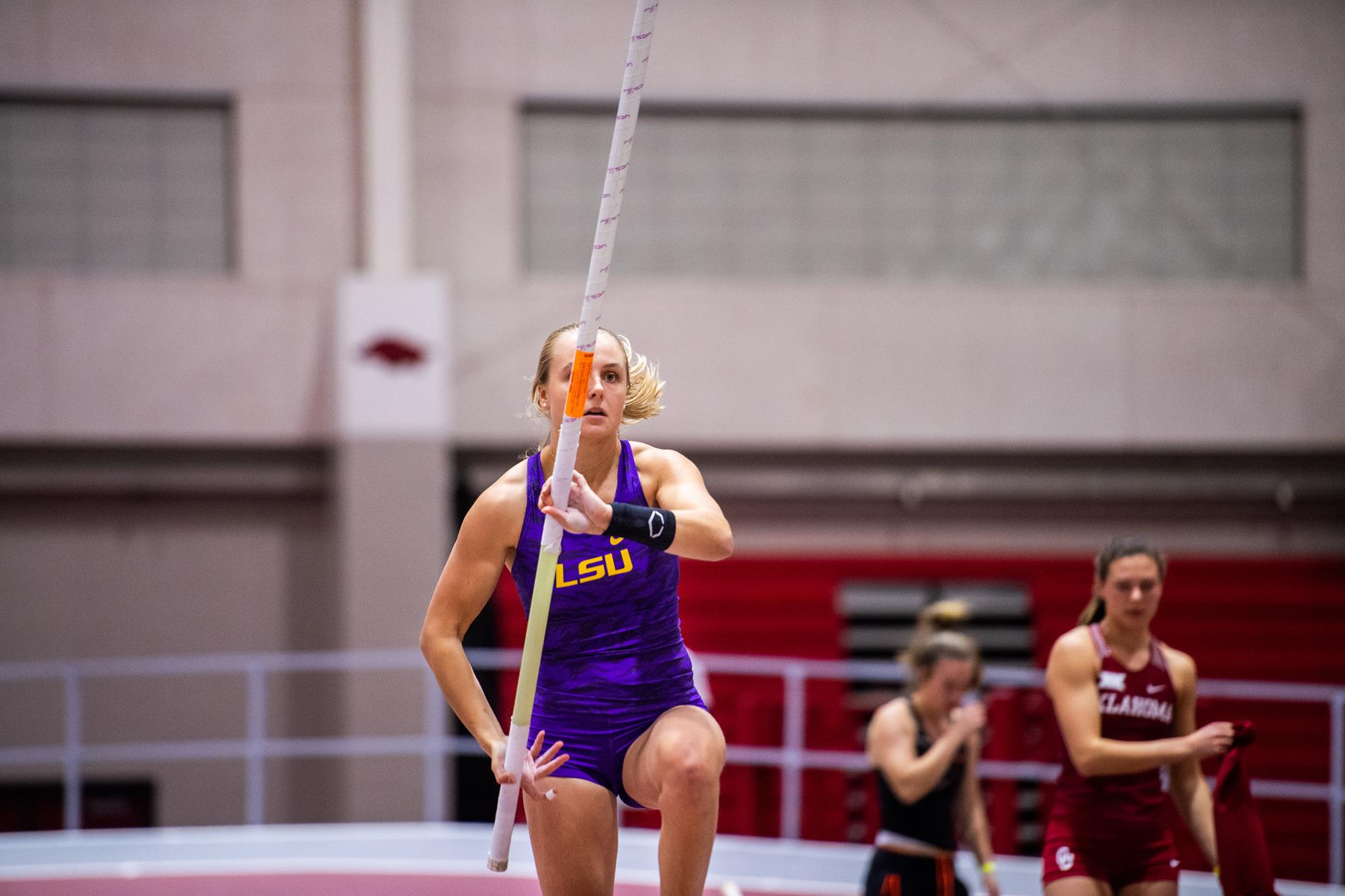 Baton Rouge, La. – The LSU track and field program will host its second and final indoor meet of the season on Friday, Feb. 21 at the Carl Maddox Fieldhouse in Baton Rouge.  The day will begin with the men’s weight throw starting at 11:30 a.m. CT.  A full list of LSU athletes competing can be viewed at the competition guide linked below.

LSU will host many local track and field programs to compete in the LSU Twilight indoor meet.  LSU will be joined by schools such as Tulane, Southeastern, Nicholls State, Northwestern State, along with a few others.  This will be LSU’s final regular season meet before they travel to College Station, Texas on Feb 28-29 to compete in the SEC Championships.  Thirty-four LSU track and field athletes (23 women, 11 men) are scheduled to compete on Friday.

LSU will send a men’s 4×400 relay squad to the Alex Wilson Invitational in South Bend. Ind. to compete on Saturday.  The foursome of Dorian Camel, Raymond Kibet, Dylan Peebles, and Tyler Terry will run at 2:30 p.m. CT Saturday afternoon.

LSU has 16 athletes and one relay team that are currently ranked inside the top ten of their events in the NCAA this season.  Of the 16, 13 of the athletes either entered the top-ten or improved upon a top ten mark this past weekend.  Junior runner Terrance Laird recorded the fastest time (20.43) in the world and NCAA this season with his winning performance in the 200 meter dash.  The Coatesville, Pa. native was honored by the SEC with the Men’s Runner of the Week for his record setting performance.  Like Laird, freshman Thelma Davies entered the NCAA top ten list in the 200 meter dash.  Davies ran a time of 22.80 which is ranked as the second fastest time in the NCAA this season and the top time for a freshman.  Davies was awarded the SEC Women’s Freshman of the Week for the second consecutive meet for her gold medal performance at the Tyson Invitational.

Two Tigers improved upon their NCAA top ten mark in the high jump competition this weekend. Abby O’Donoghue improved upon her career best clearance in the high jump with a mark of 6′ 2.25″ (1.89 meters). O’Donoghue’s clearance currently sits at No. 2 in the NCAA this season.  JuVaughn Harrison was the other athlete to improve his top ten mark in the high jump as he recorded a clearance of 7′ 5.75″ (2.28 meters) to rank No. 3 in the NCAA.  The Bowerman Watchlist nominee also registered the second longest leap in the long jump event this season with his winning mark of 26′ 7.25″ (8.11 meters).  Freshman Alia Armstrong entered the NCAA top ten list in the 60 meter hurdles with her second place time of 7.95.  Her time ranks as the No. 2 time in the country, only trailing fellow teammate Tonea Marshall.  Marshall and Armstrong are the only two runners in the NCAA to run a sub eight second time in the event.  The other top-10 national marks/times by LSU athletes are listed below:

Nineteen LSU athletes have either improved upon or made their way into the LSU top-10 lists this season with twelve of those coming in the Tyson Invitational.  Abby O’Donoghue broke the LSU school record for the second time in as many meets with her clearance of 6′ 2.75 (1.89 meters), but registered a better mark during the team’s second trip to Fayetteville, Ark.  O’Donoghue’s clearance of 6′ 2.75″ (1.89m) replaces her previous mark of 6′ 2″ (1.88 meters) as the top performance in LSU history in the event.  Nyagoa Bayak also recorded an LSU top-ten mark at the Tyson Invitational in the high jump as she cleared a height of 5′ 11.5″ (1.82m) to place second in the event as well as sixth in school history.  Eric Edwards Jr.’s time of 7.61 in the 60 meter hurdles was good enough to rank as the third best time in school history.  Alia Armstrong registered a top ten performance in the 60 meter hurdles with a time of 7.95 to rank third in LSU history.  Armstrong’s readout is also the top time for a freshman in the history of the program.  Terrance Laird, the SEC Men’s Runner of the Week, added to his name to LSU record book – the 60 meters (6.66/ No.8) and the 200 meters (20.43/ No. 2). JuVaughn Harrison registered an LSU top ten performance in both the high jump and long jump.  His clearance of 7′ 5.75″ (2.28m) in the high jump ranks as the second best mark in school history, whereas his leap of 26′ 7.25″ (8.11m) is the fourth longest jump in the history of LSU. Thelma Davies registered the third best time in school history (22.80) in the 200 meter dash.  Finally, Amber Anning entered the LSU top ten list with a time of 52.22 to rank third in LSU history.  Other top-10 LSU marks registered in 2020 below:

JuVaughn Harrison was one of 10 men named to The Bowerman watch list on Feb. 6. Harrison, a junior from Huntsville, Ala., is a two-time national champion, two-time SEC champion and three-time All-American after his first two seasons of competition in Baton Rouge. The long and lanky, multi-talented jumper became the first man in NCAA history to sweep the high jump and long jump national titles in NCAA history last June.

Harrison opened up the 2020 Indoor track and field season with a long jump of 25′ 0.50″ (7.63 meters) at the Purple Tiger Invitational for silver. Harrison followed up his season debut in the long jump with another outstanding performance as he won the men’s high jump with a clearance of 7′ 5″ (2.26 meters) at the Corky Classic. He leaped out to a season best long jump of 25′ 3.25″ (7.70 meters) at the MLK Jr. Invitational to place third. Harrison registered a leap of 25′ 1.75″ (7.66 meters) to place fourth at the Razorback Invitational.  He continued his strong indoor season this past weekend with victories in both the high jump and long jump.  Harrison registered a personal best in the high jump competition with a clearance 7′ 5.75″ (2.28m) which ranks as the third best mark in the NCAA this season as well as the second best mark in school history.  Harrison also won the long jump competition with a personal best leap of 26′ 7.25″ (8.11m).  His performance in the long jump stands as the second best mark in the NCAA and fourth in school history.