Tigers Play Host to EKU at The Box 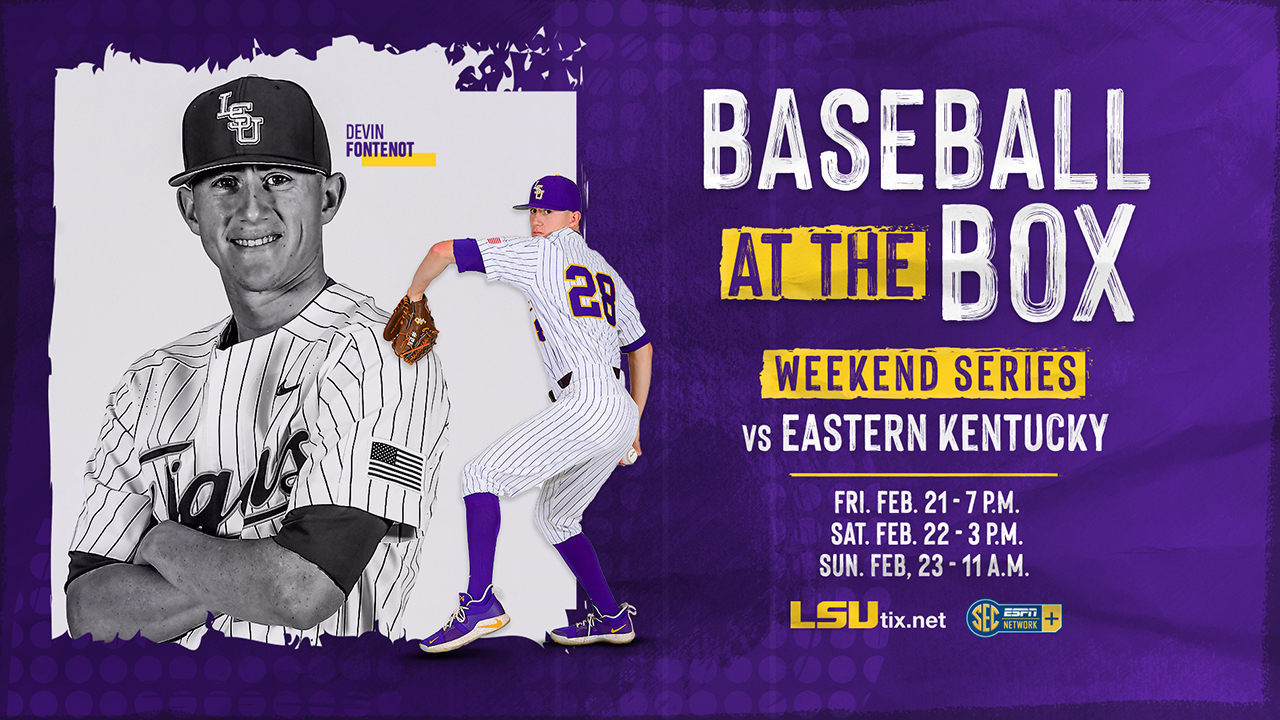 SERIES RECORD VS. EASTERN KENTUCKY
This weekend’s series marks the first meeting between LSU and Eastern Kentucky, which is a member of the Ohio Valley Conference … LSU is 8-0 all-time against current members of the Ohio Valley … the Tigers are 1-0 vs. Austin Peay, 3-0 vs. Jacksonville State, 1-0 vs. Murray State and 3-0 vs. Tennessee Tech.

QUOTING PAUL MAINIERI
“Eastern Kentucky is certainly going to challenge us this weekend; they batted .320 in their three wins last weekend, and they have a very good offensive club with a two hitters who are rated very highly as professional prospects. We didn’t play very well in the loss at Nicholls (on Wednesday), but we’re going to learn from the mistakes we made, and they’re never going to happen again. It’s my responsibility to make sure our players execute the fundamentals of the game. We’re going to continue to develop as a team and find the right balance in our lineup to give us the best chance for success.”

ABOUT THE TIGERS
• LSU opened the 2020 season last weekend by defeating defending Big Ten champion Indiana in two of three games at Alex Box Stadium, Skip Bertman Field, and the Tigers have split two games this week, posting an 8-3 win over Southern Tuesday and dropping a 4-2 decision at Nicholls Wednesday.
• The Tigers belted three homers in Tuesday’s win to pace a 12-hit output … designated hitter Saul Garza led the Tigers’ offense by going 3-for-4 at the plate with a homer and four RBI … second baseman Gavin Dugas and pinch hitter Hayden Travinski added solo homers, and first baseman Cade Beloso provided an RBI triple … right-hander Nick Storz took the mound in the fourth inning and fired a career-high three innings, notching three strikeouts and limiting Southern to two hits.
• Right-hander Aaron George recorded a career-high five strikeouts in 2.1 relief innings Wednesday at Nicholls.
• LSU coach Paul Mainieri is just six wins shy of reaching the 600-win mark in his 14-season LSU career; he has a 594-257-3 record with the Tigers … Mainieri has 1,458 victories in his 38-season collegiate career, and he is No. 2 on the career wins list for active NCAA Division I coaches.
• Infielder Zack Mathis is off to a torrid start at the plate, batting .444 (8-for-18) with one homer, four RBI and four runs … Mathis enters the EKU series riding a five-game hit streak.
• First baseman Cade Beloso, who was voted to the 2020 Preseason All-SEC First Team by the league coaches, is batting .400 this season with two doubles, one triple – the first of his career – and two RBI … Beloso hit .500 (6-for-12) in last weekend’s Indiana series with two doubles, one RBI and one run scored … in the Tigers’ 7-4 win over the Hoosiers last Saturday, Beloso was 3-for-4 at the plate with two doubles and one RBI, tying his single-game career high for hits and setting his single-game career high for doubles.
• Freshman second baseman Cade Doughty launched a two-run homer in the bottom of the first inning of Game 1 last Friday versus Indiana, becoming the first LSU player to homer in his first career collegiate at-bat since Beau Didier accomplished the feat against Villanova in 2009 … another freshman, catcher Alex Milazzo, belted a clutch two-out, two-run double in the eighth inning of Saturday’s win over Indiana, extending LSU’s lead from 5-4 to the eventual final margin of 7-4 … Doughty and Milazzo each drove in three runs in the series in their collegiate debuts.
• Sophomore right-hander Cole Henry was credited with the victory in last weekend’s season opener versus Indiana, as he worked the first four innings and limited Indiana to no runs on three hits with no walks and eight strikeouts, throwing 71 pitches in the outing.
• Sophomore right-hander Jaden Hill made his first appearance in a game since February 24, 2019, when he worked two relief innings in the second game of last Saturday’s doubleheader versus Indiana … Hill, who was sidelined last season by an elbow injury, was dominant in his outing, firing two shutout frames with no hits, one walk and three strikeouts … Hill’s fastball was consistently clocked in the upper 90s, peaking at 98 mph.

ABOUT THE COLONELS
• Eastern Kentucky is 3-0 this season after posting a three-game sweep at Presbyterian last weekend … EKU is located in Richmond, Ky., and is a member of the Ohio Valley Conference … the Colonels were 32-27 overall last season (16-14 in the OVC) and launched 75 home runs.
• Outfielder Nick Howie is a 2020 National Slugger of the Year candidate who batted .353 in 2019 with 12 doubles, 11 homers and 45 RBI.
• The Colonels hit .320 in the Presbyterian series with seven doubles, three triples, three homers and 26 runs … infielder Logan Thomason was 6-for-12 with one double, one triple and three RBI; infielder Daniel Harris was 5-for-11 with one double, one triple and four RBI; and outfielder Michael Brewer collected three hits, including a double, while posting a team-best five RBI.