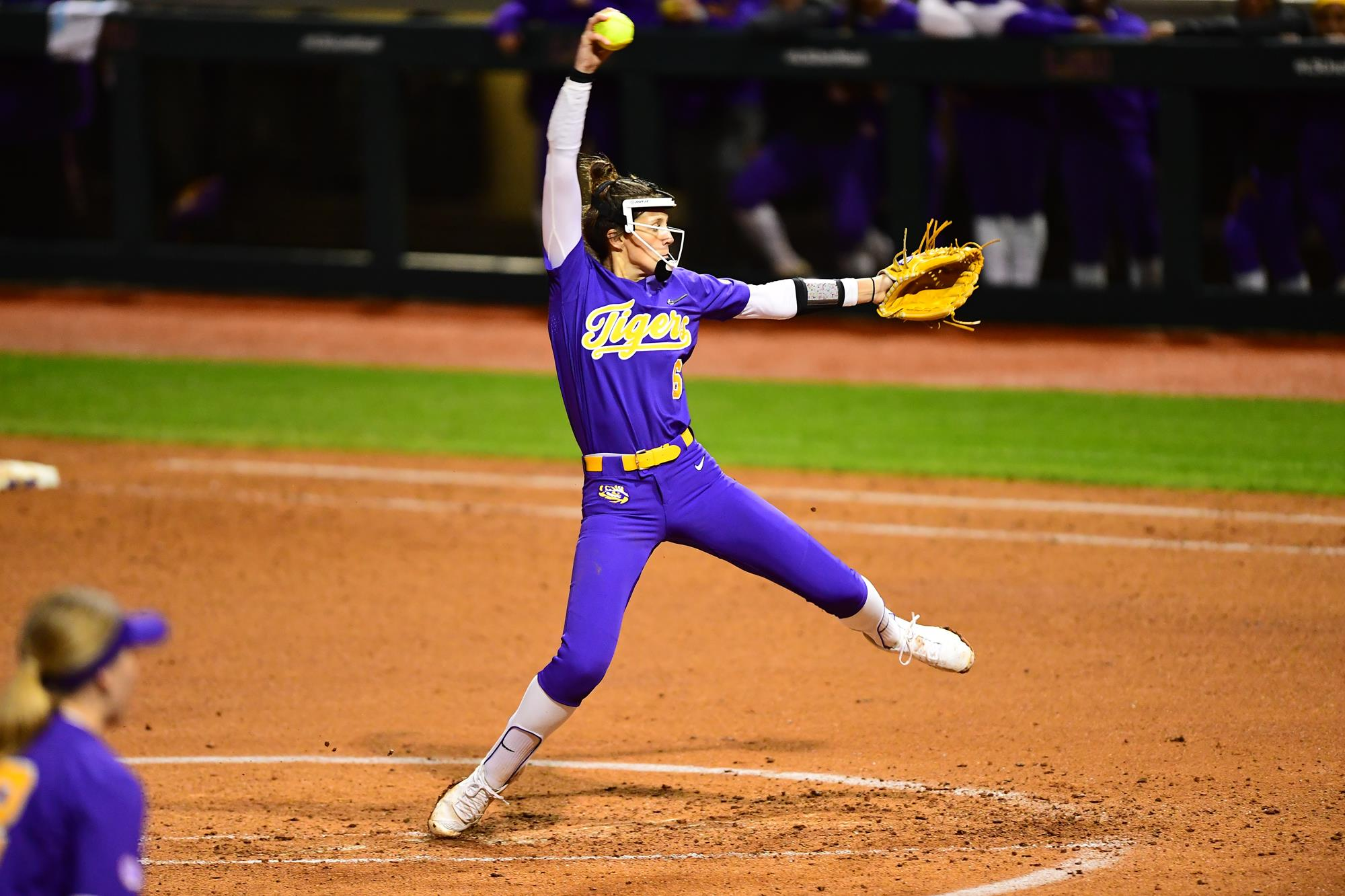 BATON ROUGE – The No. 6 LSU softball team claimed a 11-0 one-hitter over Louisiana Tech Wednesday night in Tiger Park. The Tigers improve to 9-1 on the year, while the Lady Techsters fall to 2-7 on the season.

The Tigers had chances in the first two innings, leaving two on in the first and three on in the second. The bats came alive in the third inning as Georgia Clark led off with a double. Shelbi Sunseri followed with her first home run of the year, a two-run shot over the centerfield wall to take a 2-0 lead.

In the fourth, the Tigers loaded the bases and scored another run off an RBI walk from Taylor Pleasants, bringing in Amanda Doyle. Clark followed with her first grand slam as a Tiger, taking an offspeed pitch over the left field wall. Another run came in off a Morgan Cummins double to left.

The offense continued in the fourth with a Taylor Tidwell two-run shot to give the Tigers a 10-0 lead. Jordyn Perkins followed with a home run as she came in to pinch hit, her second in her career. The Tigers ended up scoring nine runs in the inning.

Maribeth Gorsuch pitched a spectacular game as she allowed just one hit and one walk on the game with six strike outs. She improves to 2-1 on the year. Bre Hernandez was charged with the loss, dropping to 2-2 on the year.

Torina’s Thoughts
On the overall impressions of the game…

“I thought it was well played overall by our team. Nice to see some people back to swinging and get that going. Shelbi Sunseri, Amanda Doyle both had good days so it’s nice to see those guys coming around. I think that’s really important that we can be hitting on all cylinders moving forward.”

“Yeah, she was. She was very solid. I told them even when it was 2-0, I felt comfortable with the way she was pitching and the way she commanded it. I decided I was gonna give her a birthday present. Let her pitch since it’s her birthday. I told her that before the game, ‘I will let you pitch because it’s your birthday.’ And it went well.”

The Tigers host the Purple & Gold Challenge this weekend, hosting Sam Houston State and Belmont. The Tigers will play Belmont Friday at 3:30 p.m. with Sam Houston at 6 p.m.