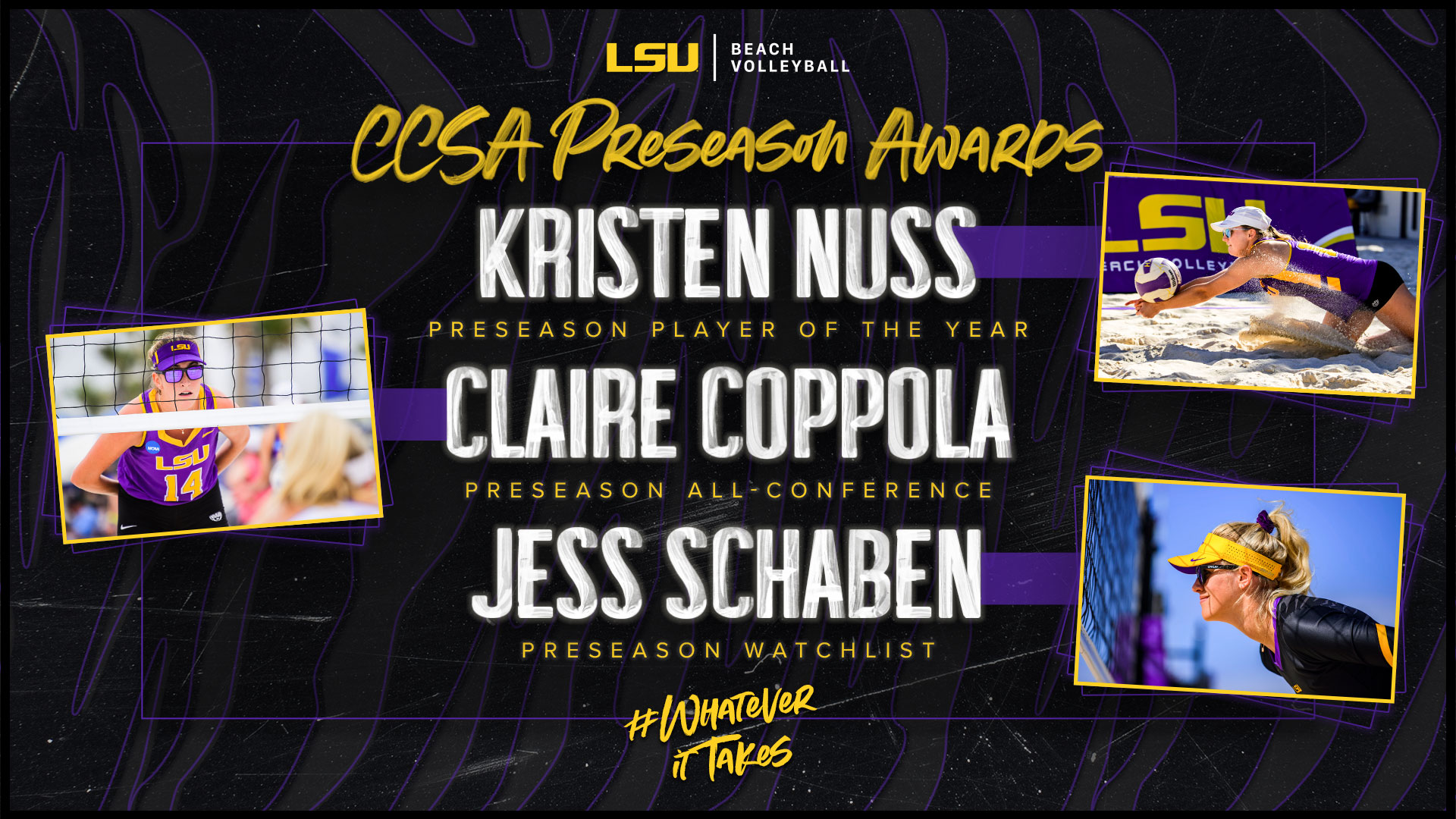 BATON ROUGE – Kristen Nuss was named the CCSA Preseason Player of the Year the conference announced Wednesday afternoon, three days before the Tigers’ season is set to begin.

“I’ve never seen anybody that has that desire to beat somebody and not be defeated more apparently,” Brock said of Coppola. “She’s not the strongest person out there, but she’s worked incredibly hard because of that fire within her to eliminate or limit all of the challenging parts of her game that she can.”

Jess Schaben, a graduate transfer from Iowa State, was named to the 2020 CCSA Watchlist.

“There will be no doubt that she will be impressing and surprising a lot of people on the other side of the net,” said Brock.

No. 2/3 LSU is set to begin its season this Saturday on Queens Beach in Honolulu, Hawaii for the Duke Kahanamoku Beach Challenge. The Tigers will face No. 1 UCLA, No. 5 Hawaii and No. 19 Stanford at the challenge.

The Tigers will begin its home slate the following weekend, February 29-March 1, at the Tiger Beach Challenge. LSU will host a round robin style tournament in which it will compete in five matches, including Saturday match against No. 1 UCLA.

Coppola and Nuss, both preseason All-Americans, are entering their senior seasons together having played every collegiate match as a pair. They have amassed a 91-19 record in the sand together and have a chance to become just the third pair in collegiate beach volleyball history to collect 100 victories together.

The Tigers’ top duo has helped bring LSU to national prominence, propelling it to the NCAA Championships in three consecutive seasons. Coppola and Nuss have picked up numerous honors and awards over the past three seasons, including multiple selection to All-America teams, being the two-time defending CCSA Pair of the Year and two-time defending USAV Collegiate Beach Champions.

“They are successful because of each other,” Brock explained about his top pair. “They draw on each other to become better players emotionally with their energy.”

Schaben joined LSU in the fall after a successful indoor career at Iowa State where she earned a degree in Elementary Education. During her time in Aimes, Schaben became the first Cyclone in program history to register at least 300 kills in all four of her college seasons. She was also just the third player in Iowa State history to record 1,500 career kills and 1,000 career digs.

That success earned Schaben a spot as an honorable mention on the AVCA All-America Team in 2016, 2017 and 2018. She was named All-Big 12 First team in each of those three seasons as well. Success in the classroom landed the Defiance, Iowa native on the Big 12 Commissioner’s Honor Roll in all eight semesters she was at Iowa State.

“She understands blocking without even trying to understand better than people who have trained their whole life on the beach,” said Brock. “She’s super impactful right away in that way.”