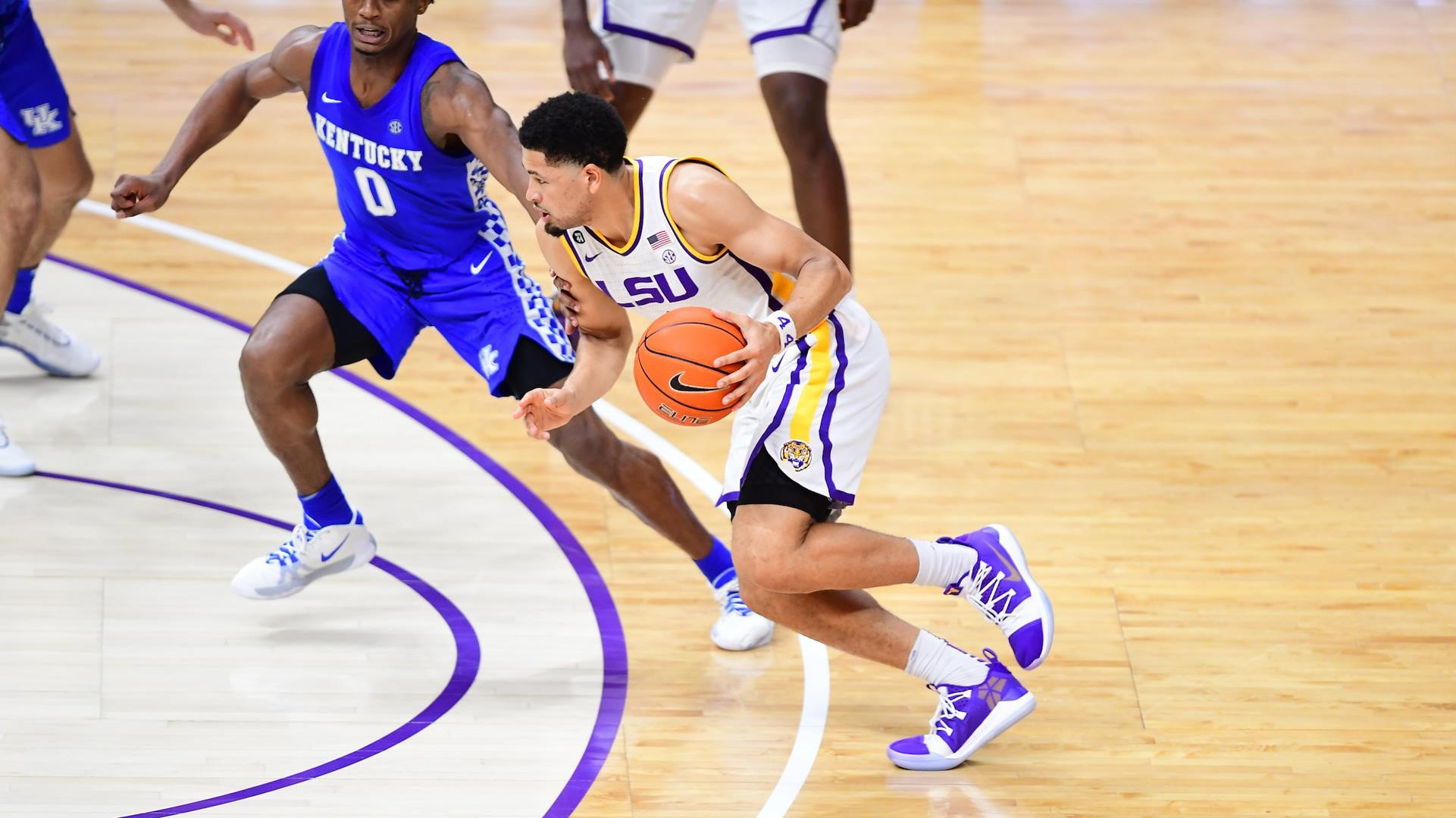 BATON ROUGE – The LSU Tigers were able to out rebound the No. 10 Kentucky Wildcats Tuesday night, but the Wildcats shot 74 percent in the second half and made 7-of-8 three-pointers in the final 20 minutes to score a 79-76 win over the Tigers at the Pete Maravich Assembly Center.

The teams played a close first half with 10 lead changes and six ties with LSU getting a 28-24 advantage with 3:11 to go. But Kentucky got a bucket from Nick Richards and a three from Ashton Hagans while LSU turned the ball over three times and missed three shots to allow the Wildcats to go to the break, 29-28.

Immanuel Quickley had 21 points and six assists to lead Kentucky with Tyrese Maxey adding 14, Richards 13 and Hagans and Nate Sestina each scored 11.

The Tigers were led by Skylar Mays with 17 points with Darius Days getting 13 points and 11 rebounds. Marlon Taylor also had 13 while Charles Manning Jr., had his first double figure scoring game since his foot surgery, scoring 11, and Trendon Watford put in 10.

It was Days’ eighth double of the season and of his 11 rebounds, eight were offensive boards.

The Tigers out rebounded the Wildcats, 45-33 with a 23-13 advantage in offensive boards. LSU had a 26-12 advantage in second chance points. The Wildcats were able to get the advantage in an area LSU has had success in, scoring a 36-28 advantage in the paint. Kentucky blocked 11 LSU shots, the first time an opponent has blocked 10 or more shots since Texas A&M in Jan. 2017.

The paid attendance of 13,260 was the 12th largest in the present seating configuration (since 2006).

The Tigers now go on the road for two games starting Saturday at South Carolina before traveling to Florida on Feb. 26. LSU’s next home game is Feb. 29 against Texas A&M. Tickets are available at the LSU Athletics Ticket Office and online at LSUtix.net.

On the performance of Kentucky’s Nate Sestina…
“He’s a good player. Kentucky’s road splits are better shooting the ball. We left him wide open. He’s a good college player. Of course he’s going to make a wide open shot. He had been shooting it well earlier in the year. I knew he had struggled lately. He struggled against Mississippi. He struggled in a couple of the other games. He had a wide open corner three, a wide open pick-and-pop three. He’s a good player. He’s going to make plays when you give him those opportunities.”

On if this game followed familiar patterns…
“It’s the same script. Give Kentucky credit. He (Coach Calipari) usually comes in here and runs all his pin downs and all that stuff. We were hoping he was going to run all that because we can run all that. Second half he just said, the hell with that, we’re just going to spread them and drive them. He ran all that over-under stuff, got the mismatch and then drove the hell out of us to the front of the rim which was very, very smart. That’s why he’s in the hall of fame.”

“They made plays and were able to execute in that moment.  They played harder than us throughout the game.  Sometimes in a crucial moment you can expand the lead versus them cutting into and even taking the lead, and that was a big moment.”

On Kentucky’s ability to defend the interior …

“We haven’t seen a rim protector as good as Nick Richards.  He did a great job of controlling the paint and it made it tough for us.  That’s kind of our bread and butter, and he definitely made it a lot harder for us today.”

On what went wrong in the second half …

“They didn’t miss much, and we didn’t make it tough on them.  We just have to be better on the defensive end, that’s kind of the reason why we are losing.  We have lost four of five and we have to figure it out.”

On his play tonight …

“I felt good, but I felt like I could have contributed a little bit more on the defensive side.  Kentucky is good team and they played great.”

On facing a team with a lot of size …

“It was really fun, being down there with (EJ) Montgomery and (Nick) Richards.  We haven’t played anyone like that all season, and it was really fun.  I got to experience some things that I enjoy. The big guys down there, me, Emmitt (Williams) Trendon (Watford), and even Marlon (Taylor) are going to have to do better. We have to come back, regroup and do what we have to do to win.”
—
Kentucky Head Coach John Calipari

“Yeah, its funny I give them a lot of books and then I ask them, ‘Did you read this?’ I’m trying to get them to understand, they leave us and if I can leave them with one thing, read. Tweak your mind – be curious. Most of the stuff I give them is what I think is pertinent to them. So sometimes it’s a parable in that form which is easier for them to read. That book wasn’t. I told him that he needed to read it because there was a girl that was a college player that got injured and got demoralized when she wasn’t playing well and then how she built herself back and then she ended up having a great year. I said, ‘It’s a great story for you to read.’ He’s a great kid.  I’ve been telling him he has buzzard luck. Can’t find anything to eat and nothing will die. I told him I’ve been praying for him. I just wanted him to break through. You want all these kids to play well. Johnny Juzang at the end of the game is why we were able to win the game.  You say, ‘Well what did he do? He didn’t score a basket’. It’s because he had a calmness about him taking it out of bounds, and we can throw it back and he knew where to go with the ball. It’s not Keion’s (Brooks Jr) fault. I have never played Keion in that position. So then you say, ‘Well why did you have them take it out?’ Because I wanted them to have a bigger lineup in and he was the only one left to take it out. That’s when I said, ‘Johnny get back in there’.