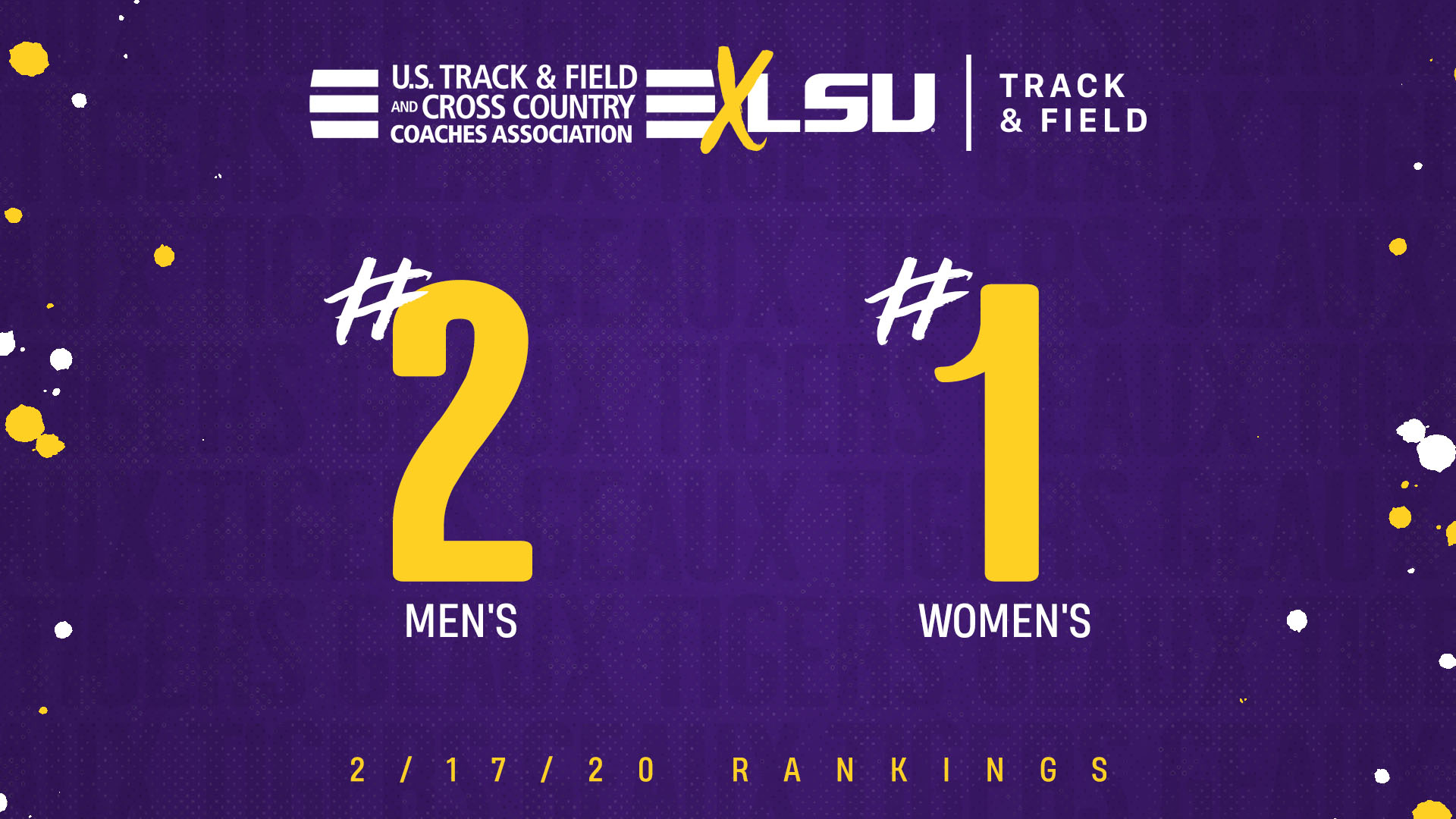 Baton Rouge, La. – For the first time since 2013, the LSU women’s track and field team has ascended to the top of NCAA Division I Indoor Track and Field Rating Index. The rankings were released Monday afternoon by the U.S. Track & Field and Cross Country Coaches Association. The LSU men held steady at the No. 2 spot, a position they’ve been in for most of the season.

LSU made the leap up to No. 1 on the women’s side from the No. 6 position a week ago. LSU’s women registered seven NCAA top-10 marks this past weekend. Thelma Davies (200 meter dash) and Alia Armstrong (60 meter hurdles), both whom are freshman, posted the No. 2 times in the NCAA in their respective events this weekend. Davies ran career best of 22.80 in the 200 meters to win the event, and Armstrong clocked a career best of 7.95 in the 60 meter hurdles to take second place in the event behind teammate and NCAA leader, Tonea Marshall. Marshall’s NCAA leading mark came in mid-January at the Corky Classic with an altitude converted time of 7.88. Abby O’Donoghue upped her LSU school record to 6′ 2.25″ (1.89 meters) in the high jump to rank second nationally as well at the Tyson Invitational.

Two other freshmen clocked national top 10 marks as well this weekend in Arkansas. Amber Anning ran a personal best of 52.22 in the 400 meters to rank No. 6 nationally, and freshman Nyagoa Bayak cleared a season best of 5′ 11.50″ (1.82 meters) to rank sixth in the NCAA. At the Iowa State Classic, sophomore Katy-Ann McDonald ran a personal best of 2:04.59 in the 800 meter run to take over the No. 6 spot in the national standings. The women’s 4×400 meter relay closed out the Tyson Invitational with a season best of 3:32.87 to rank No. 8 in the NCAA; Kiya Oviosun, Symone Mason, Brittley Humphrey, and Anning made up that relay. Other women who rank on the NCAA top-10 list with marks prior to this weekend are Lisa Gunnarsson (pole vault/No. 6/14′ 7.25″) and Mercy Abire (long jump/No. 7/21′ 1.50″).

The men registered seven of their current top-10 NCAA marks this past weekend at the Tyson Invitational. Juco transfer Terrance Laird popped off and ran a world and NCAA leading mark of 20.43 in the 200 meter dash. Fellow 200-meter dasher Akanni Hislop registered a personal best as well with a readout of 20.82 to rank eighth in the NCAA.

A member of the mid-indoor Bowerman Watch List, JuVaughn Harrison registered two national marks at the Tyson Invitational to hint at the kind of impact he can have on the national meet; lest no one forget that he swept long jump and high jump national titles at the 2019 outdoor NCAA meet. Harrison went a personal best 26′ 7.25″ (8.11 meters) in the long jump on Friday night before clearing 7′ 5.75″ (2.28 meters) in the high jump on Saturday; the long jump ranks No. 2 in the NCAA and the high jump is No. 3. Rayvon Grey, the 2019 indoor national champion in the long jump, owns a season best of 26′ 6.50″ (8.09 meters) to rank third nationally.

Eric Edwards Jr. (7.61) and Damion Thomas (7.68) ran quality 60-meter hurdles races this weekend at the Tyson Invitational to finish second and third in the event. The time of 7.61 by Edwards Jr. ranks No. 3 nationally, and Thomas’ readout of 7.68 is No. 9 in the NCAA. The final top-10 mark of the weekend came from senior sprinter Tyler Terry in the 400 meter dash. Terry clocked a season best time of 46.21 to rank ninth nationally.

The LSU track and field team will close out the regular season on Friday (Feb. 21) with the LSU Twilight at the Carl Maddox Fieldhouse. The SEC Championships will be Feb. 28-29 in College Station, Texas before the NCAA meet takes place March 13-14 in Albuquerque, N.M.