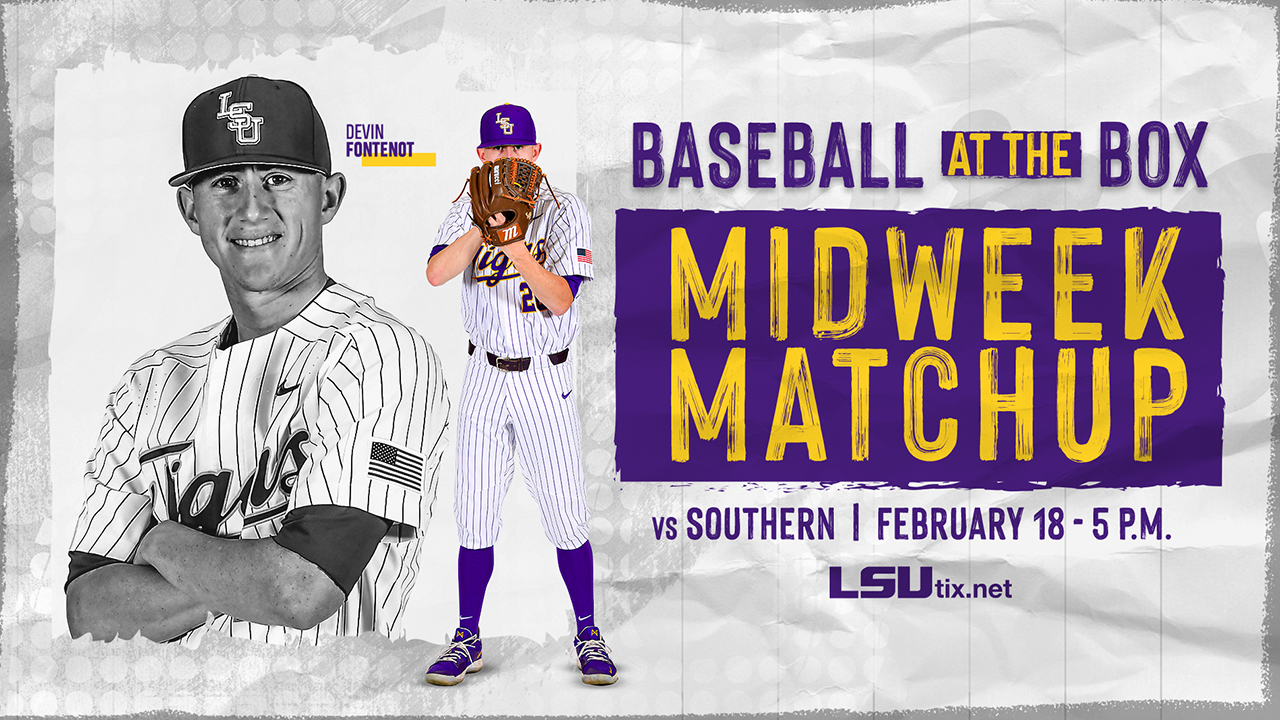 SERIES RECORD VS. SOUTHERN
LSU leads the series with its intra-city opponent, 53-3, as the squads first met in 1970. LSU had won 14 consecutive games over Southern before the Jaguars posted a 7-2 win over the Tigers last season at SU’s Lee-Hines Field. The Jaguars’ other wins over the Tigers came on May 3, 2005, a 9-5 Southern triumph in Alex Box Stadium, and on March 6, 2001, an 11-6 victory at “The Box.” LSU is 47-2 all-time against Southern in games played at Alex Box Stadium.

QUOTING PAUL MAINIERI
“(Southern coach) Kerrick Jackson has done a tremendous job with his program; I know they’re young, but so are we in some regard. It’s going to be a good ball game, and we’re going to go out there and play our hearts out. There were a lot of things I liked about the way we played in the opening series against Indiana, which is a very good ball club. For the most part, our pitching was really good the entire weekend, and I thought we played pretty well overall. You’re going to see our team get better and better as the year goes on.”

ABOUT THE TIGERS
• LSU opened the 2020 season last weekend by defeating defending Big Ten champion Indiana in two of three games at Alex Box Stadium, Skip Bertman Field … Friday’s 8-1 win over the Hoosiers in Game 1 marked LSU’s 19th straight victory in a season-opening game.
• First baseman Cade Beloso, who was voted to the 2020 Preseason All-SEC First Team by the league coaches, batted .500 (6-for-12) in the Indiana series with two doubles, one RBI and one run scored … in the Tigers’ 7-4 win over the Hoosiers on Saturday, Beloso was 3-for-4 at the plate with two doubles and one RBI, tying his single-game career high for hits and setting his single-game career high for doubles/
• Freshman second baseman Cade Doughty launched a two-run homer in the bottom of the first inning of Game 1 versus Indiana, becoming the first LSU player to homer in his first career collegiate at-bat since Beau Didier accomplished the feat against Villanova in 2009 … another freshman, catcher Alex Milazzo, belted a clutch two-out, two-run double in the eighth inning of Saturday’s win over Indiana, extending LSU’s lead from 5-4 to the eventual final margin of 7-4 … Doughty and Milazzo each drove in three runs in the series in their collegiate debuts
• Sophomore right-hander Cole Henry was credited with the victory in Game 1, as he worked the first four innings and limited Indiana to no runs on three hits with no walks and eight strikeouts, throwing 71 pitches in the outing … junior right-hander Trent Vietmeier earned an impressive relief win in Game 2, firing 1.2 shutout innings with no hits, no walks and two strikeouts … Vietmeier entered the game in the top of the fifth inning with one out, a runner at second and the Tigers holding a 5-3 lead … Vietmeier kept the Hoosiers off the scoreboard during his outing, allowing LSU to earn the 7-4 victory.
• Sophomore right-hander Jaden Hill made his first appearance in a game since February 24, 2019, when he worked two relief innings in the second game of Saturday’s doubleheader versus Indiana … Hill, who was sidelined last season by an elbow injury, was dominant in his outing, firing two shutout frames with no hits, one walk and three strikeouts … Hill’s fastball was consistently clocked in the upper 90s, peaking at 98 mph.
• LSU coach Paul Mainieri is just seven wins shy of reaching the 600-win mark in his 14-season LSU career … Mainieri has 1,457 victories in his 38-season collegiate career, and he is No. 2 on NCAA Division I Active Coaches wins list, trailing only Mike Fox of North Carolina, who has 1,478 career victories.

ABOUT THE JAGUARS
• Southern is 2-2 this season after splitting four games last weekend at the Andre Dawson Classic in New Orleans … the Jaguars defeated the University of New Orleans and Alcorn State before dropping decisions to Grambling and to Alabama State.
• Southern is the reigning Southwestern Athletic Conference champion, as the Jaguars posted a 34-24 overall mark and participated in the 2019 NCAA Starkville Regional in their second season under coach Kerrick Jackson.

Admission and parking are free for the scrimmages, and fans will be admitted through Gate 1 on the right field side of the stadium beginning approximately 15 minutes prior to the first pitch each day.
Skip To Main Content