A.J. Labas, Nick Storz Happy to Return to the Mound for LSU 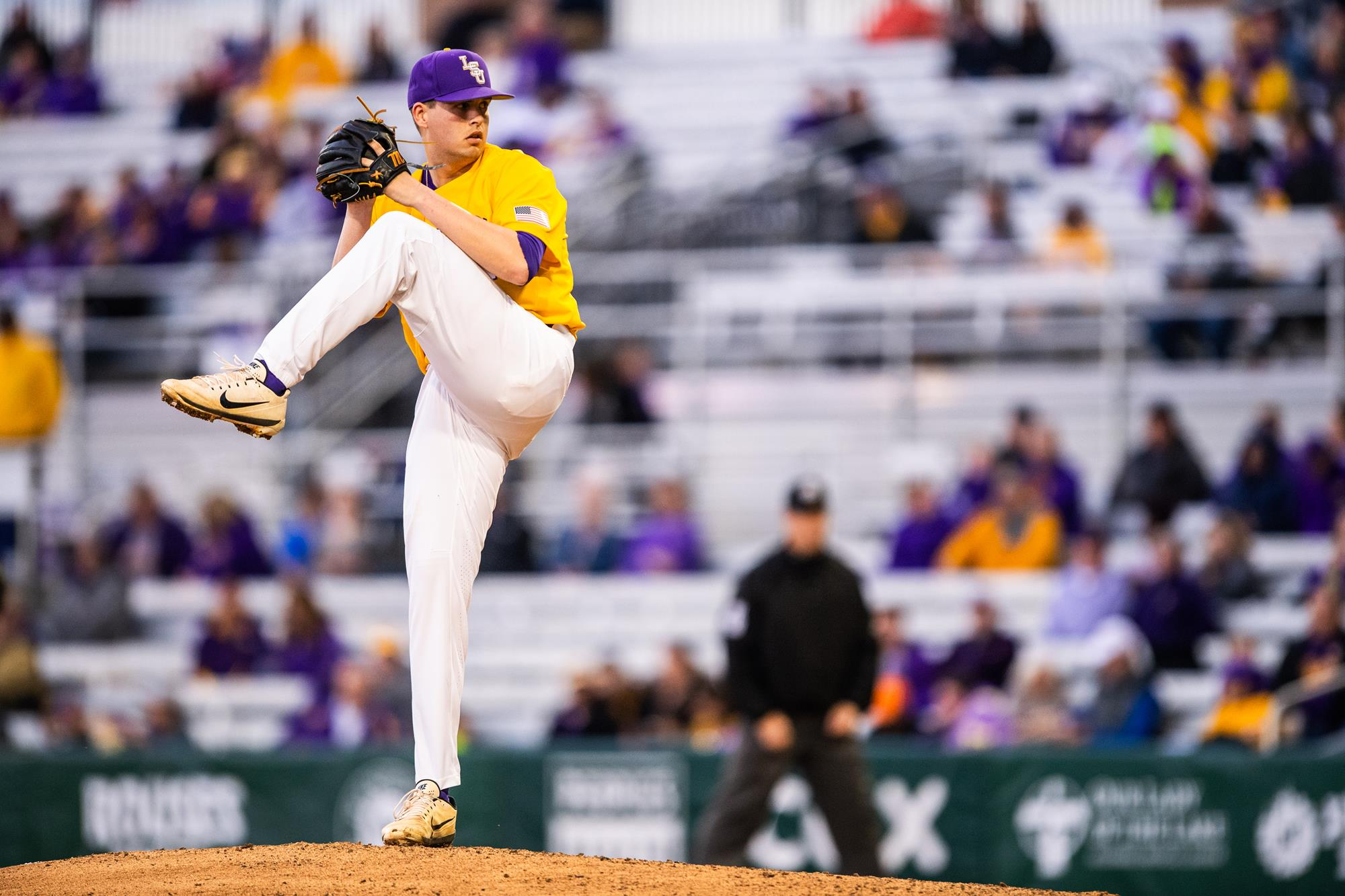 Before LSU’s season-opening series against Indiana this past weekend, LSU sophomore pitchers AJ Labas and Nick Storz hadn’t stepped on the mound in a live game since May 2018.

For both, a return to the hill has been a long time coming – and, hopefully, worth the wait.

They were two of the most sought after pitchers out of high school in 2017, and Storz was even considered a top 100 prospect for the 2017 MLB draft by Baseball America. The Detroit Tigers drafted Storz in the 31st round while the New York Mets selected Labas in the 17th round of that year’s draft.

Both turned down the Major Leagues, instead choosing to head to Baton Rouge. In the 21 months that spanned their appearances for LSU, the hype for their arrival has been replaced by excitement for their return following medical redshirts.

After an excellent fall, Labas earned the role as LSU’s Sunday starter, cracking a rotation full of talented arms competing for three spots.

“It means a lot. Here it is championship Sunday,” Labas said. “It just means a lot putting that jersey on going for either the sweep or series win. This will be a fun year and I’m really excited to see what’s in store for us.”

On Saturday, Labas got the start for LSU in Game 2 of the Tigers’ double-header with Indiana, rescheduled a day earlier due to weather. In 4.1 innings of work, he allowed just four baserunners, striking out four and giving up three runs on three hits. The sophomore was sharp, with good movement on his 92 mile per hour two-seam fastball and a knee-buckling curveball to complement, and he allowed just one run to score before he was taken out after 75 pitches with two men on base.

“It feels really good just to get out there again and be able to compete and be healthy for the first time in two years,” Labas said. “There’s some things I still need to improve on, but overall I was happy with it.”

As a freshman, Labas impressed with a 6-2 record and 3.48 ERA in 13 appearances, but Storz struggled to get healthy while doctors and trainers searched for answer to pain in his shoulder, which plagued him during his senior year of high school. Storz had bone spurs removed from his throwing shoulder prior to the start of his freshman season at LSU but still struggled with pain due to what was later diagnosed as a tear in his latissimus dorsi, limiting him to three innings in two appearances as a freshman.

Labas, meanwhile, has dealt with injury issues of his own as well. He had back surgery before his freshman season and was shut down heading into the 2018 postseason with fatigue. Then in the fall, pain persisted in his throwing shoulder, a result of tightness in his posterior capsule.

LSU athletic trainer Cory Couture said while each case is different, what made things difficult about Labas and Storz’s situations was nothing popped up on either’s X-rays or MRIs.

“You kind of have to work it, treat it a little bit, give them a little bit of rehab and try to throw and see what happens,” Cuture said. “If it’s a successful outcome, you add to it. If it’s not, then you back off and change course. We did that with both of them for a while, and eventually, we got to the point where they had to have surgery.”

Storz had surgery to totally repair his lat in Oct. 2018, and Labas’ shoulder surgery followed in Jan. 2019, forcing them both to medically redshirt for the 2019 season.

“It was extremely tough, but the biggest thing for me was always come to the field with a positive attitude,” Storz said. “I’m going to handle my side of things to get back on the field, but while that is happening I’m going to be the best teammate that I can be – rooting on the team 24/7, being in the dugout making noise. That was the mindset, and just guys in the locker room, they had my back so it made it a lot easier.”

On Saturday, Storz made his return to the hill, as well, pitching an inning in the first game of the double-header, a 7-4 LSU win. Storz gave up just a single hit in the inning, throwing 14 pitches in the seventh and inducing an inning-ending double play to escape the frame damage-free.

Couture said LSU is making strides to limit arm soreness issues in its pitching staff this year, but it is something that is a part of baseball now for a variety of reasons. He points to early sports specialization in younger athletes and higher-velocity throws in those same athletes, resulting in more stress on the arms of current pitchers than ones who came to LSU in the past.

One of the preventative additions is more frequent usage of the Motus Sleeve, a device that pitchers wear on their elbows to measure the stress of each pitch or throw. Couture first got the device in 2015, and LSU bought a device for each pitcher last fall.

Couture spent last season acquiring data but didn’t make any decisions based on it until this season, when the staff had a firmer grasp on the technology. He tries to keep the pitchers in a stress range of 0.8-1.3, and if they go over 1.3, they’ll be forced to rest or sit out until the number falls back within range.

The sleeve and additional technology allow the training staff to monitor each throw – whether it’s a bullpen session, live pitch or long toss drill – and use it along with information acquired from an in-depth report on prior injuries and baseball experience to develop a comprehensive throwing program for each player.

“It’s a peace of mind really,” said Labas, who has been to shut down for rest once so far this spring. “You don’t have to worry about getting hurt, and you can just worry about going out and throwing and letting the numbers talk for themselves.”

Hopeful their injury issues are behind them, Labas and Storz are ready to build on their starts to the season. They’ve both fought to get back to being the players that were so highly coveted by colleges across the country and MLB teams.