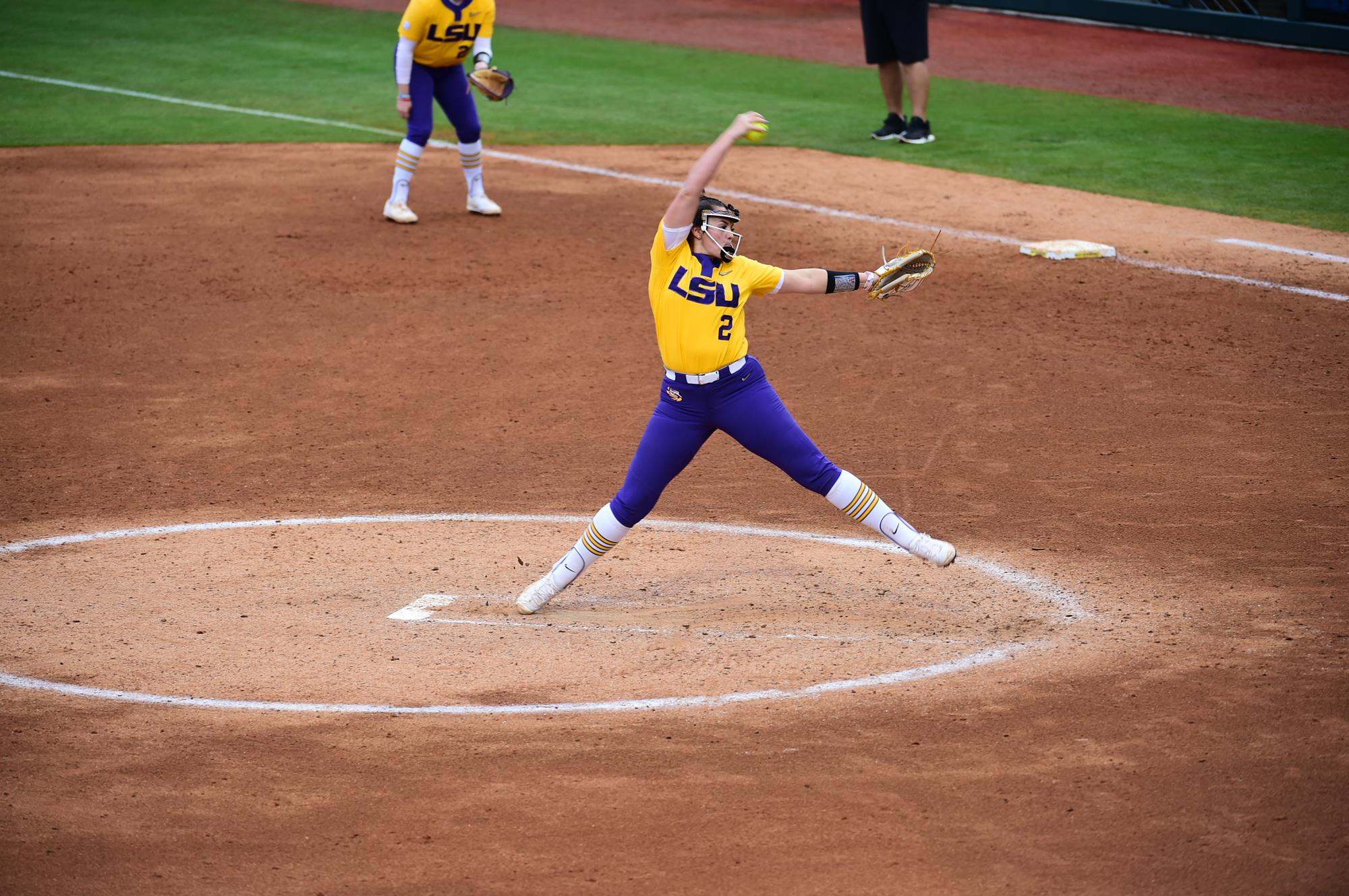 BATON ROUGE – The No. 7 LSU softball team took care of business against North Dakota and No. 13 ULL on Sunday afternoon, downing the Fighting Hawks, 8-0 in five innings and claiming a 4-3 win over the Ragin’ Cajuns. The Tigers improved to 8-1 on the year, while North Dakota goes to 3-6 and ULL goes to 7-2.

After Shelby Wickersham pitched a scoreless first inning, the Tigers were on the board, taking a 3-0 lead. Aliyah Andrews led off with an infield single and scored on a Taylor Pleasants single through the left side. Amanda Doyle brought in two more on a single to left field, scoring Georgia Clark and Pleasants.

Wickersham continue to deal in the circle, as she struck out two more in the circle in the fourth inning. She sat down the first six batters.

The Tigers’ offense continued in the second as they scored two more to extend their lead to 5-0. Savannah Stewart walked with one out and stole second. She moved to third on Andrews’ single through the left side and scored on a throwing error by North Dakota. Andrews came in on an RBI ground out by Ciara Briggs.

Tidwell hit her second bomb of the year in the fourth inning, a solo shot over the right field wall to extend the Tigers’ lead to 6-0. She singled again in the bottom of the fifth to score two more and end the game for the Tigers in run-rule fashion.

The freshmen got the offense going in the bottom of the first as Ciara Briggs singled up the middle with one out. She would then score on Taylor Pleasants’ two-run home run over the centerfield wall, her second dinger on the year.

After a scoreless second inning, the Ragin’ Cajuns tied the game up with two runs off a solo home run and a single down the left field line to score from second.

The Tigers had a chance in the third as Savannah Stewart singled to the infield. She advanced to third on a Pleasants double to left center. Georgia Clark battled to a 2-2 count, but struck out to end the inning.

In the fourth, the Tigers took a 3-2 lead on Morgan Cummins’ second dinger on the season, a solo shot over the centerfield wall.

Sunseri kept the Cajuns off balance in the fourth and fifth innings but they got one across on a throwing error by the Tigers to tie the game up at 3-3. The Tigers got out of the inning on a line drive double play by Tidwell and Pleasants.

With two outs in the bottom of the sixth, Cummins doubled to left center to bring in Akiya Thymes from second to take the 4-3 lead for good.

Ali Kilponen earned the win in the circle to improve to 3-0 on the year. ULL’s Kleist takes her first loss of the year. Sunseri, who started the game, allowed two earned runs off six hits, while striking out two and walking two in 5.1 innings of work. Kilponen pitched 1.2 innings of work.

Torina’s Thoughts
On what the win means to the team…

On the crowd at Tiger Park…

“They were awesome. Our fans are amazing. They were in every pitch with us. I think our team did a great job keeping them in every pitch. But it’s nice to have the fans support. We wouldn’t rather be anywhere but Tiger Park in the whole country.”

Game Notes
– Beth Torina picked up wins 496 and 497 and is now three wins away from reaching 500 in her career.

– Taylor Pleasants, Taylor Tidwell and Morgan Cummins all hit their second home runs of the season in the two games today.

– Kilponen improves to 3-0 on the year, while Wickersham moves to 2-0.

– The announced attendance against ULL was 2,246.

– The Tigers are now 16-11 against the Ragin Cajuns in program history.

Up Next
The Tigers take on LA Tech in Tiger Park on Wednesday at 6 p.m. The game will stream live on SEC Network+ and will be available via live stats at LSUStats.com.