Women’s Hoops At Auburn On Sunday 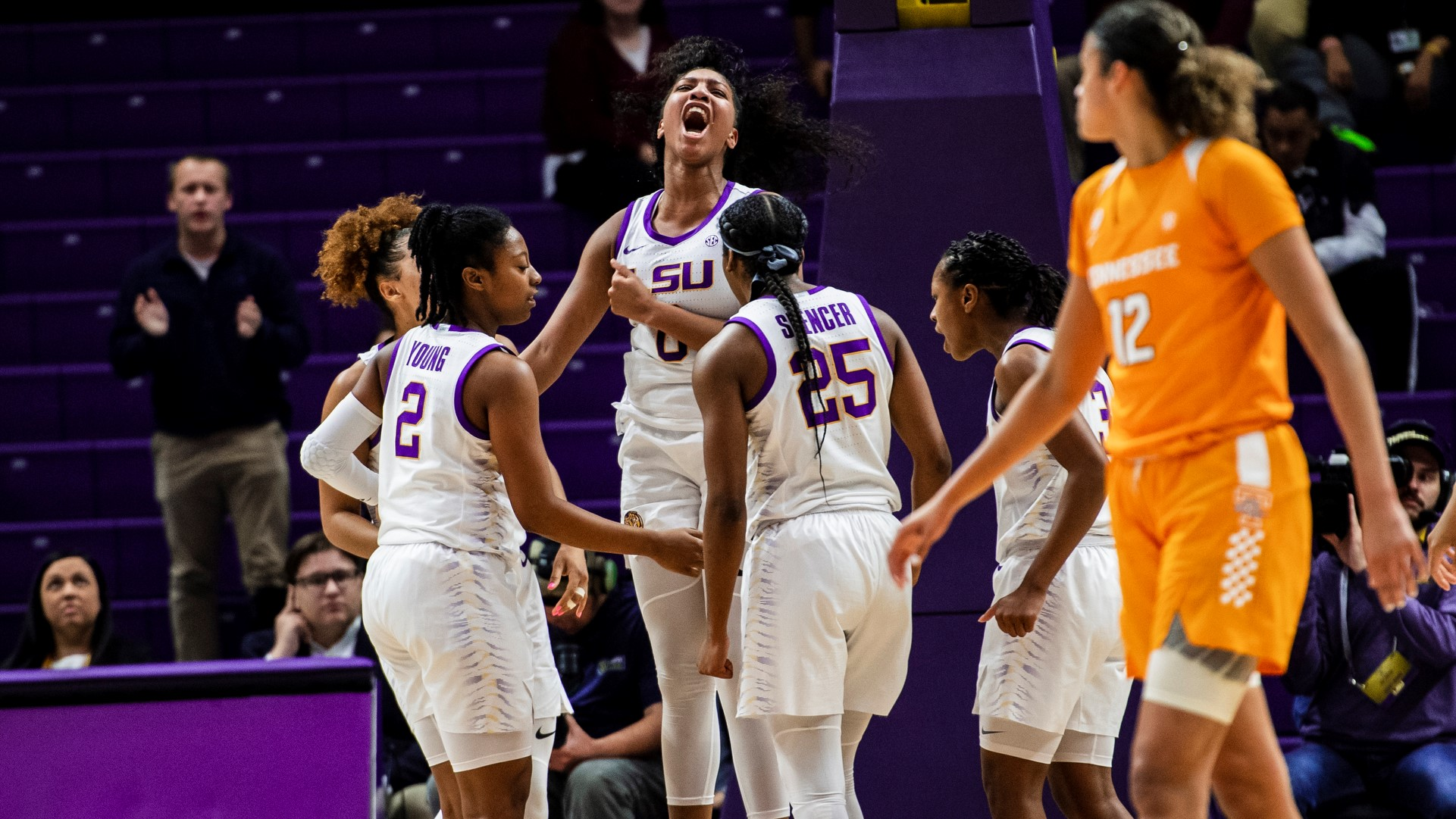 BATON ROUGE – The LSU women’s basketball team will be on the road for three of its last five games of the regular season, starting at Auburn on Sunday, February 16. Game time is set for 4 p.m. CT and will be broadcast on the SEC Network.

LSU has five Top-25 wins on the season, following Thursday’s 75-65 victory over No. 25 Tennessee on Thursday night. It is the most wins against ranked teams for the Tigers since the 2012-13 season when LSU went 6-6 against Top-25 teams.

LSU, currently receiving votes in the Associated Press and USA Today/WBCA Coaches Polls, beat Tennessee at the PMAC on February 13, 75-65. Junior Khayla Pointer led the team with 24 points, 10 rebounds and six assists for her third career double-double. Junior Awa Trasi stepped up big for LSU with 22 points on 5-of-10 shooting from beyond the arc to go along with big defensive plays in the second half, while freshman Tiara Young came off the bench to finish with 10 points.

Pointer is currently fourth in the SEC in minutes played at 32.8 per game. The move up the chart is due to three consecutive games of 40 minutes of action. Pointer leads the squad from the point with 15.3 points and 4.5 assists per game. She has one of the best free throw shooting percentages on the squad at 70.1 and the most steals with 55.

Redshirt junior Faustine Aifuwa is having a solid season in the paint for LSU. Aifuwa is second on the team among active players with 10.0 points per game. She is sporting a 48.8 field goal percentage to go along with 8.2 rebounds per game and 40 blocked shots.

LSU continues its solid play on defense, having held opponents to 50 points or under five times and 15 opponents at 60 or under so far this season and winning the battle of the boards in 20 games played.

With the loss of Mitchell, LSU head coach Nikki Fargas is counting on her bench to step up and fill the void with several players taking on different roles. Trasi moved into the starting slot and stretches LSU’s offense with her long-range shooting. Several players, including junior Rakell Spencer and freshman Tiara Young, come off the bench to provide a defensive spark against opponents’ top player.

Auburn is led by All-SEC performer Unique Thompson who is averaging 16.4 points and 12 .0 rebounds per game. Daisa Alexander is also averaging double figures at 13.2 points per game, while Brooke Moore was averaging 10.4 points per game before suffering an injury several games ago.

Head coach Terri Williams-Flournoy is in her 8th season at Auburn. LSU’s connection to Auburn is assistant coach Charlene Thomas-Swinson. Thomas-Swinson played for the other Tigers from 1983-87 and was an assistant for her alma mater from 1992-96.

The next home game for LSU will be Sunday, February 23 against Georgia at 2 p.m. Fans can purchase tickets for the two remaining home games against the Bulldogs and Vanderbilt at LSUtix.net.