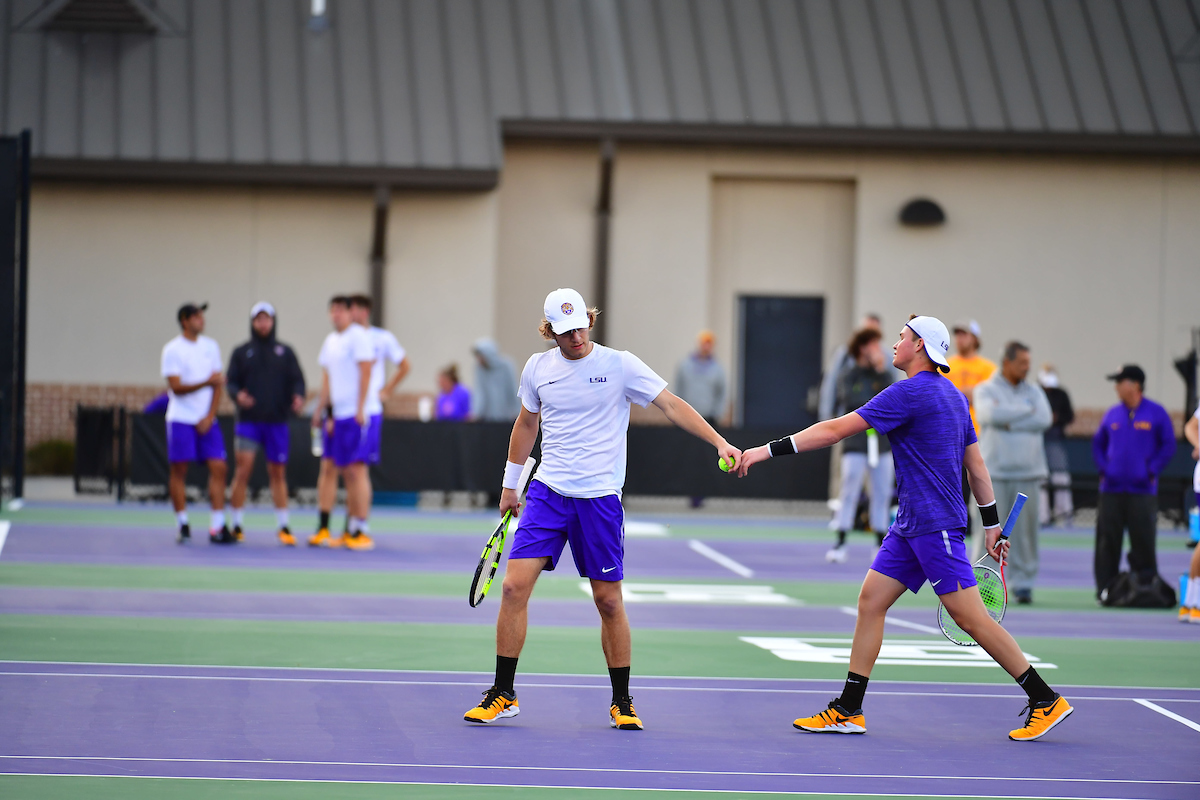 BATON ROUGE, La.—The LSU men’s tennis team improved to 7-2 on the season after taking down the SMU Mustangs, 4-0, and the UNO Privateers, 7-0, Saturday at the LSU Tennis Complex.

The Tigers got back to their winning ways after losing two close matches against Dartmouth and Tulane. LSU looked laser-focused going after a two-week break and their performance showed that—they didn’t drop a single match.

Doubles play started the day off at noon against SMU. On court two, senior Rafael Wagner and freshman Ronald Hohmann breezed through their match over SMU’s Mats Westkamp and Misha Fomenkov. They dropped the first set, then went on to win the next three, eventually taking the match 6-2. Sophomores Boris Kozlov and Nick Watson clinched the doubles point, winning the match 6-3. The duo fell behind 2-3 but turned it up and didn’t drop a set for the rest of the match.

The Tigers didn’t miss a beat when singles play started. LSU clinched the match with a combined 10 sets dropped between Tomas Descarrega, Boris Kozlov, and Joey Thomas. Tomas Descarrega strolled through his opponent on court five with a 6-2, 6-2, victory. Kozlov followed up with a victory of his own, winning 6-2, 6-1. Thomas closed the match out in dominant fashion, finishing off Gardiner Perotti 6-1, 6-2.

After a brief intermission, doubles against UNO started in the afternoon. Senior Ruy Teixeira and junior Malik Bhatnagar got their first duo win, defeating Johannes Klein and Malte Steingass 6-2. Ronald Hohmann and Rafael Wagner got their second doubles win, as well as LSU’s second doubles point, taking down Mats Westkamp and Misha Fomenkov 6-3.

The Tigers didn’t let up on the gas on their last match of the day. Rafael Wagner gave the Tigers a 2-0 LSU lead after making quick work of Johannes Klein, winning 6-1, 6-1. Tomas Descarrega continued his strong freshman campaign with a dominate victory over Espen Lagarde, 6-2, 6-1. Joey Watson defeated Malte Steingass 6-1, 6-2, giving the Tigers their second victory of the day.

The teams decided to play out the remaining matches, going into a 10-point tiebreak if reaching a third-set. Only one match made it to the tiebreak after Bhatnagar and Hohmann finished their matches on court one and court two. Bhatnagar defeated Mats Westkamp 6-4, 6-4, and Hohmann winning 6-2, 6-4. Boris Kozlov dropped the first set against Max Heinzel but caught fire in the last two sets. He came back in the second set, winning 6-1, then dominating the tiebreak 10-4.