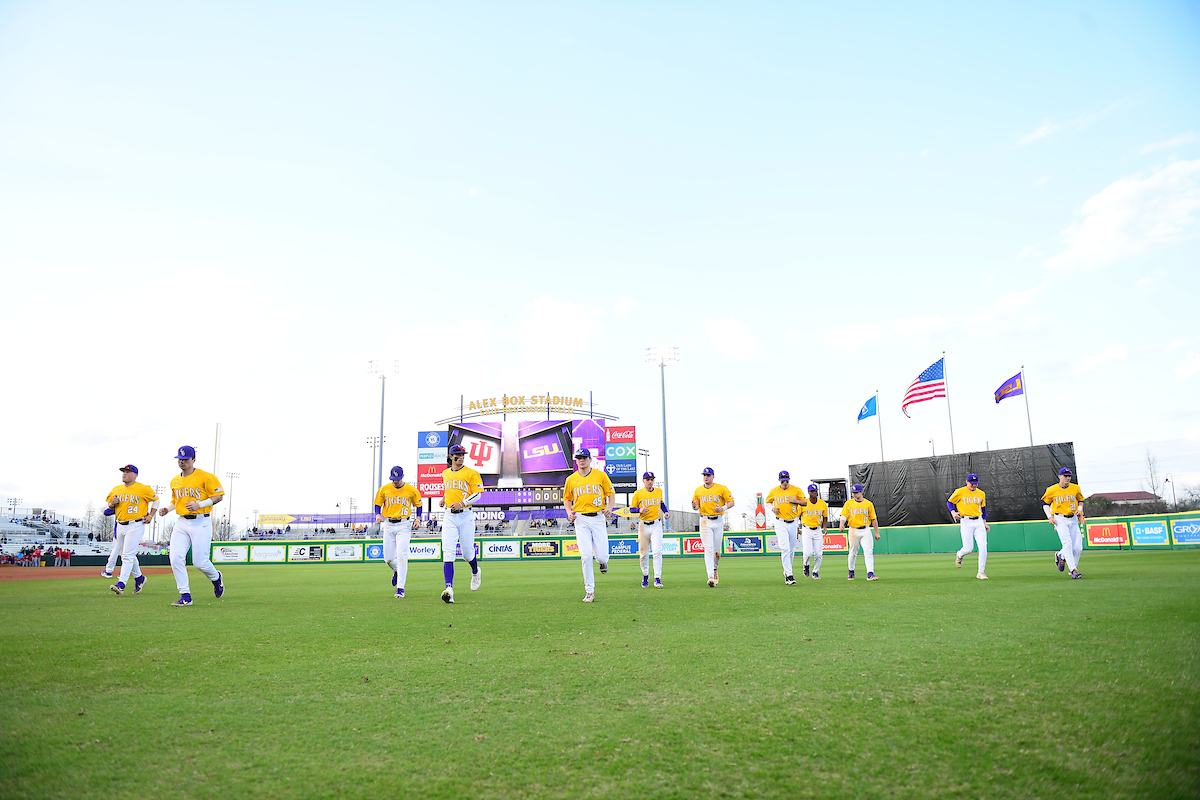 BATON ROUGE, La. – No. 11 LSU and Indiana split a doubleheader Saturday in Alex Box Stadium, Skip Bertman Field. The Tigers posted a 7-4 victory in the first game to claim the series win, and Indiana prevailed in the second game, 7-2 to avoid the series sweep. LSU is now 2-1 on the season, while Indiana moves to 1-2.

The Tigers are back in action Tuesday against Southern in Alex Box Stadium Field. First pitch is slated for 5 p.m. CT, and the game will be available on SEC Network+ and on 100.7 FM in Baton Rouge.

“Indiana’s got a really good club, they’re the defending Big Ten champions, and they ran out a lot of really good arms against us,” said LSU coach Paul Mainieri. “Overall for the weekend, we won two games, we pitched 15 different guys over the course of the series, and we learned a lot about our team. That’s what you do at this time of the year; sometimes you have to suffer setbacks in order to learn which guys you can count on.

Our kids played very hard, we won two out of three, and we’ve got a big week coming up beginning on Tuesday with Southern.”

Indiana took the early lead as the Hoosiers put up one run in the top of the first. Centerfielder Grant Richardson hit a one-out triple to right center, then scored on a sac fly from third baseman Cole Barr.

The Tigers would not trail for long as first baseman Cade Beloso hit an RBI single to left that scored second baseman Cade Doughty.

LSU added two runs in the bottom of the second to take the lead. Left fielder Drew Bianco and centerfielder Giovanni DiGiacomo drew back-to-back one-out walks. Catcher Alex Milazzo then reached on a fielding error by shortstop Jeremy Houston. Bianco scored the unearned run and DiGiacomo moved over to third.

The Tigers put up another two-spot in the fourth as designated hitter Saul Garza hit a leadoff single through the right side. Bianco then laid down a successful bunt for a base hit that put two runners on with no outs.

A sacrifice from DiGiacomo moved Garza to third and Bianco to second. Milazzo then hit a grounder that scored Garza from third and moved Bianco to third. Hughes followed with an RBI single to right that scored Bianco and gave LSU the 5-1 advantage.

Indiana responded in the top of the fifth with a two-run homer off the bat of Barr. Richardson set up the play with a one-out single to left. The Hoosiers also added another run in the eighth as catcher Collin Hopkins scored on an RBI single from second baseman Drew Ashley.

LSU would add two more runs in the bottom of the eighth to seal the win. Beloso doubled to start the inning and Garza followed with a walk. Milazzo then doubled to left-center to score Beloso and pinch runner Mitchell Sanford, extending the LSU lead to 7-4.

Four pitchers combined in the LSU victory. Trent Vietmeier (1-0) earned the win as he worked 1.2 innings and recorded two strikeouts. Devin Fontenot was awarded the save as he fired two innings, allowing one run on three hits with two strikeouts.

Landon Marceaux started the game and tossed 4.1 innings, picking up two strikeouts while allowing three runs on six hits. Nick Storz pitched one inning of relief and allowed one hit.

Indiana plated the first run of the game in the top of the third inning. Right fielder Hunter Jessee hit a one-out triple to center and centerfielder Grant Richardson hit a sac fly to deep center that scored Jessee and gave Indiana a 1-0 lead.

The Hoosiers added two more runs in the fifth. Shortstop Jeremy Houston and Jessee reached on back-to-back singles. Catcher Drew Ashley hit a sac fly to left that scored Houston from third. Richardson followed with a double to left-center that scored Jessee and gave Indiana a 3-0 lead.

The Tigers responded in the bottom of the sixth with one run. Second baseman Gavin Dugas hit a leadoff single and moved to second on a wild pitch. Rightfielder Daniel Cabrera then singled to move Dugas to third, and designated hitter Cade Doughty hit a sac fly to left, scoring Dugas. The run cut Indiana’s lead to 3-1.

The Hoosiers added another run in the eighth on a sac fly from Collin Hopkins. Richardson set up the sac fly play after drawing a walk and moving over to third after a fielding error.

In the ninth, Indiana added three more runs on a two-run homer to right field by Richardson and an RBI single by first baseman Jordan Fucci to take a 7-1 lead.

LSU third baseman Zack Mathis took the first pitch of the inning and sent a solo shot over the right field wall in the bottom of the ninth.

Indiana starter Braydon Tucker (1-0) earned the win with six innings on the mound. He allowed one run on four hits and fired one strikeout.