After Powerful Friday, Tigers Get Scrappy to Take Series vs. Indiana 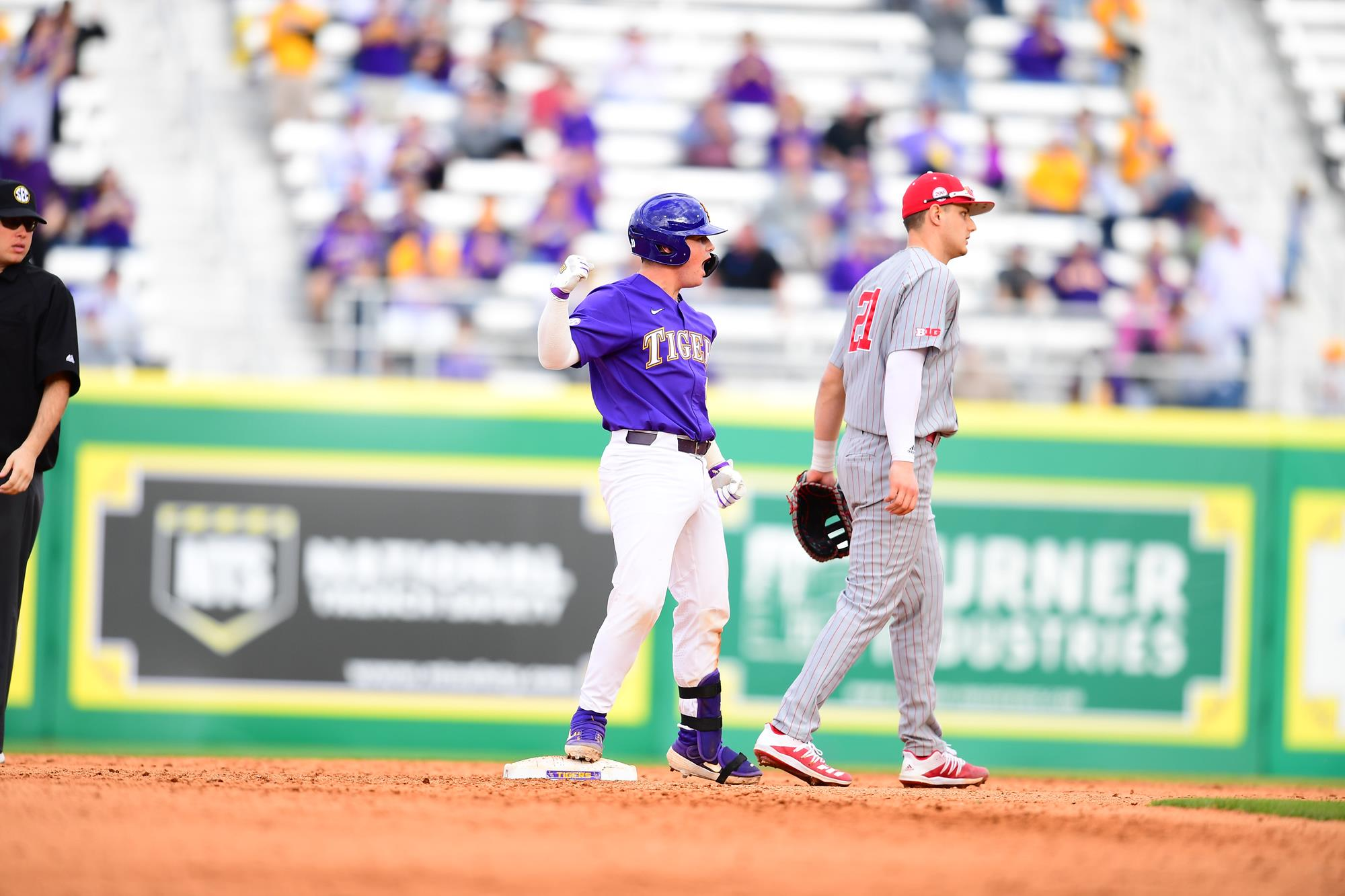 Alex Milazzo cruised into second base, turned his back to the LSU dugout, and gave a celebratory shimmy of his hips.

The freshman catcher, making his first career start in game two of the Tigers’ series with Indiana, epitomized his team in a 7-4 win.

Scrappy, feisty, and excellent in the clutch.

LET’S GEAUX??@milazzo_20 drives in two runs to extend the LSU lead as we head to the ninth! pic.twitter.com/MpuPcDqdDM

“We’ve got some kids I think that are real winners,” said head coach Paul Mainieri. “That Milazzo kid, you see why I love him so much. He’s just a scrapper, a fighter, and he’ll battle you until the end.”

It wasn’t always pretty, but the Tigers got the job done to claim the series. Friday night’s 8-1 win saw LSU feast on strikeouts on the mound and homers at the plate to power past the Hoosiers.

Saturday’s win – the first of a doubleheader – was entirely different, as the Tigers used small ball on offense and slick fielding on defense to strand 11 Indiana runners and hold the Hoosiers to 1-of-15 when those runners reached scoring position.

Starter Landon Marceaux made it into the fifth inning before Indiana caught up to him. After giving up just one run on three hits through four, Marceaux surrendered a two-run homer and gave way to Trent Veitmeier.

Fortunately, his offense had already provided some cushion. Cade Beloso, who finished 3-for-4 with a pair of doubles, tied the game at one in the first with an RBI single to left to score Cade Doughty. In the second, Milazzo and Hal Hughes – batting eighth and ninth in the order – each drove in runs to extend the lead to 3-1. Milazzo fired a groundball between the shortstop’s legs to reach on an error and score Drew Bianco, before Hughes rocketed sac fly to center to bring Giovanni DiGiacomo home.

They repeated the effort in the fourth, when Milazzo grounded out to short to score Saul Garza, before Hughes drove a single to right field to score Bianco again.

End 4 | The Tigers add two runs in the inning to extend the lead!

And after Indiana made it 5-4 in the eighth, Milazzo stepped up with a two-run double into left center field to provide the final margin for the win.

Meanwhile on the mound, while Marceaux failed to find his best stuff, the Tiger bullpen got the job done, working their way out of jams and holding the Hoosiers to one run in 4.2 innings of relief.

Vietmeier stopped the bleeding when he inherited a runner at second and only one out in the fifth. After the first batter he faced reached base on a strike out that Milazzo couldn’t haul in, Vietmeier struck out the next better he faced, then induced a pop-up to Hughes to escape unscathed.

Fontenot, meanwhile, escaped the most precarious jam of the night. With the tying run at third and the go-ahead run at second, the junior fanned Grant Richardson to end the eighth and set the stage for Milazzo’s killshot.

“It felt like an SEC nail biter,” Mainieri said. “We had to battle like crazy to win that game. I was really proud of our guys. You can see them improving and their confidence getting better with each passing day. I saw it in practice, and I’ve seen it even in these first two games here this weekend.

“You’ve got to win the close ones if you want to have a great season.”