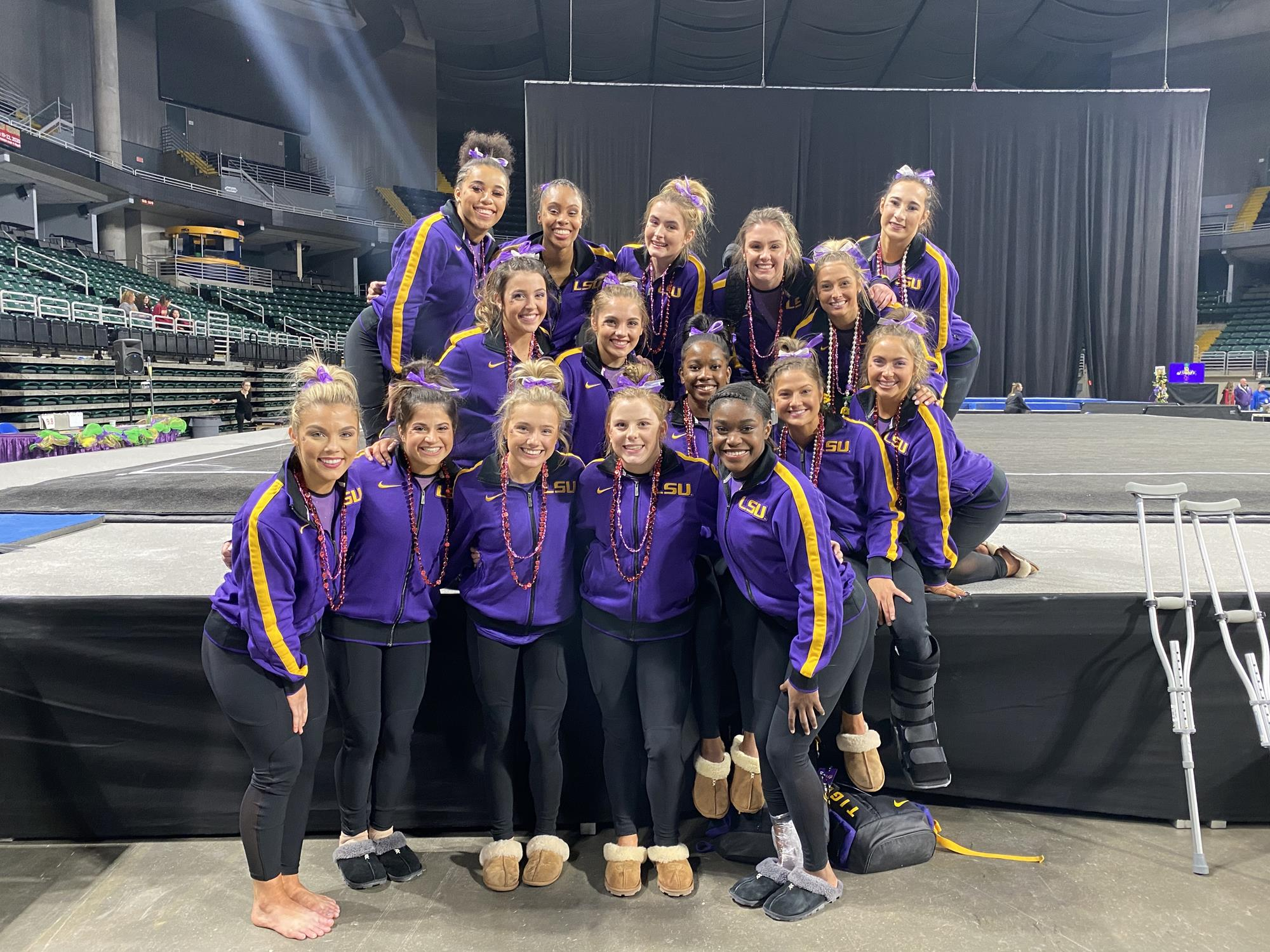 ST. CHARLES, Mo. – In a complete 24-for-24 night from the Fighting Tigers, No. 9 LSU claimed the top spot at the Gym Quarters Invitational with a season-high score of 197.875 Friday night inside Family Arena.

The Tigers were led by Kiya Johnson in the all-around with a career high 39.750. The top freshman in the nation scored her second career perfect 10 and her first on vault. Johnson also scored a 9.95 on floor and 9.925 on beam for the event titles. Junior Sami Durante and freshman Alyona Shchennikova also claimed titles with scores of 9.95 on bars.

“This was the best performance of the year and it started from the first routine,” D-D Breaux said. “You could feel the team feeding off the momentum that each routine created. It was a great night and now we need to reset and get some rest before our meet Sunday back in Baton Rouge.”

The Tigers return to Baton Rouge for their second meet of the season against No. 12 Kentucky at 2:15 p.m. CT Sunday inside the Maravich Center.

Tiger Open with Strong Vault Performance
Freshmen Kai Rivers and Maddie Rau opened the night with scores of 9.875 and 9.80. Seniors Ruby Harrold and Kennedi Edney also highlighted the event with a 9.90 and 9.95. Johnson’s 10 pushed the Tigers to a 49.525 on the event.

Pair Wins Bars Titles for Season High Bars Score
LSU scored a season high 49.475 for a season high on bars. Shchennikova and Durante both earned career high scores of 9.95 for the title. Johnson opened the rotation with a 9.875 and Rivers and Harrold earned scores of 9.85.

Final Two Lead Beam in Third Rotation
Johnson claimed the beam win with a 9.925 and junior Reagan Campbell anchored the event with a 9.90. Christina Desiderio led off with a 9.825 and Bridget Dean scored a 9.85 in the second spot. Durante scored a 9.875 and Edney followed with a 9.80 in the fourth spot.

Floor Scores Season High to Close Win
The Tigers ended the night with an exclamation mark and a 49.500 for a season high. Harrold opened the event with a 9.85. Desiderio made her first appearance of the season on floor and earned a 9.875. Dean put up a 9.875 in the third spot of the lineup for a career high. Campbell also followed with a 9.875. Johnson scored a 9.95 for another title and Edney anchored with a 9.925 for a season high.