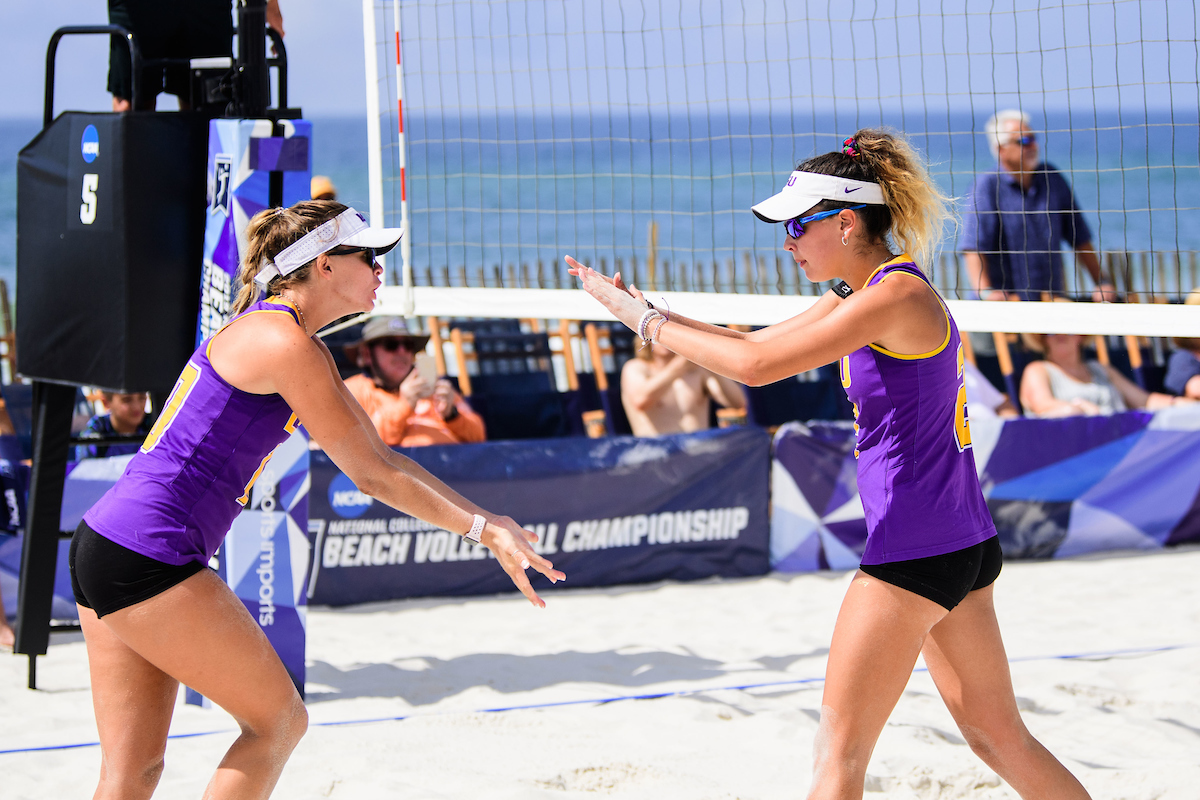 22 players, nine states, and one family.

The mantra, the makeup, and the diverse backgrounds define No. 2 LSU Beach Volleyball team led by fourth-year head coach Russell Brock. It epitomizes Brock’s philosophy of finding the hidden gems.

Their chemistry is evident. Their interactions are genuine. Their drive for a championship is ravenous.

“We’ve built our brand on finding the best kids in the country,” Brock says. “You won’t find a lot of rosters with all of those states on it, but for us, it is not just about being a great player but being the right type of person to come into our family. It’s been fun to find those gems wherever they happen to be.”

Nine different states have produced 22 players, but nine of those 22 players come from outside the Southeast. They span from freshman to graduate transfer and have come from very different cultures compared to Baton Rouge.

Brock’s recruiting pitch over the years has taken shape for out-of-state players, but it can always be tweaked.

“I think the pitch has changed over the years,” Brock says. “I mean, initially, when we first started out, it was more of a vision that we could be one of the better teams in the country. We could have a team that is very family-like that supports each other and cares for each other in a place that really is built to enjoy great athletics.”

Brock realizes the way to have people invest in a program is by winning. The passion for sports in Louisiana is born out of winning consistently, and that is what Brock is trying to build at LSU: a consistent winner.

“When you’re talking to somebody that loves athletics, wants to be a part of something that is special and unique, then it helps to be in a place like this,” Brock says.

Trust was a big factor in the development of the beach volleyball program. Tangible results weren’t the initial priority when Brock first arrived, but rather a hoped-for byproduct of building the right way. He wanted players that believed in a vision for excellence and competing for championships every year. He found his first crop of transcendent players in Claire Coppola and Kristen Nuss. Four years later, the “hidden gems” are preseason All-American athletes.

Another major point in Brock’s recruiting process is finding players with outstanding academics. Excellence matters, and if it’s real, it carries over, in competition and out of it.

Messages are subject to change for different areas of the country, but the program Brock has built in Baton Rouge has flexed its muscles, adding players from every part of the country. They are proud of the geographical diversity they have, and many of those players are daily contributors and leaders in the sand.

Freshman Grace Seits, a native of Ramona, California, has set her sights on showing why she is an up-and-coming star. Before donning the purple and gold, she won three league championships in a row at Ramona High School and received the Bulldog Award.

Seits is one of the most recent out-of-state players to find her new home at LSU. She knew this place was different from the beginning.

“Before coming here, I had a talk with my family and everything, and you’ll know when you get to the school you’re supposed to be at what it will feel like,” Seits says. “When I got here, visiting with Russell (Brock) and the team and just the environment, I felt like it really felt right, and I knew I belonged here. Claire (Coppola) said, ‘Moving across the country, you want to go to a place you feel like home, even though it’s so far away.’ Coming here, it really does feel like home.”

Moving from a small town in San Diego, California, Seits described her arrival to Louisiana as a culture shock.

“When I say almost nothing is the same in Baton Rouge compared to San Diego, almost nothing is the same. I loved it. The change was like a good change. The food is so different, but it’s better. I love the food here; it’s so good. Weather was tough. Going from like sunny and 75 in San Diego to like humid, super hot, or like freezing cold. It’s definitely different, but I still love both.”

Sophomore Allison Coens, who hails from Lenexa, Kansas, looks to follow up her freshman year with another strong output. Coens had a record of 23-6 in pair matchups with her fellow out-of-state teammate, Hunter Domanski. She arrived and made her name known, but her hometown culture is very different from Baton Rouge. Over the last two years, she has tried to become accustomed to the differences between a small town in Johnson County and East Baton Rouge Parish.

“My teammates from Louisiana had accepted me into their family and made me feel home the second I got here,” Coens says. “I remember the first week I showed up on campus as a freshman, Tatum and a couple of other girls that are from Louisiana were like, ‘Let’s go out to dinner and come try our favorite restaurants.’ That is so welcoming to me and made me feel I was at home the first week that I was here.”

Coens noted she loved the camaraderie displayed by everyone, showing off what made her fall in love with Baton Rouge and LSU in the first place.

“I love the people down here,” Coens says, “and the first thing I noticed when I met the team was just that they were a family, and it was like a group of sisters. That was really, really attractive to me just because you hear a lot of stories about times that that isn’t the case in college, but I could tell everyone here had each other’s back.”

Domanski, a junior of New Braunfels, Texas, compared to her teammates, did not have to go far to attend LSU. Only a six-hour drive to her new home. Even though she may be the closest player to her hometown, she still found several reasons to fall in love with Baton Rouge.

“I just fell in love with the coaching staff and the girls both on my visit. I just saw they were all one, big family, and I wanted to be a part of that.”

Due to the proximity of her home and Baton Rouge, she thinks she didn’t have as much of a culture shock as others might.

“It wasn’t that big of a culture shock just because I’m from the South, and Louisiana is just a state over. But, definitely my freshman year, it took some adjusting to get used to trying to understand Cajun accents. Everyone here has been super hospitable, and they’re all great people. I love all of Louisiana, really. They’ve really welcomed me into their state.”

Senior and preseason All-American Claire Coppola, from Scottsdale, Arizona, has the potential to have an even better season than last year that consisted of 33 wins coupled with four losses. Alongside her counterpart, senior Kristen Nuss, they are striving for nothing more than championships. Both have excelled on the court, and both have excelled in their friendship.

Nuss, a New Orleans native, has been next to Coppola since their freshman year, when they amassed 18 wins, seven of those being top-10 ranked wins. Nuss has been there every step of the way, helping her adapt to a new culture from her own.

“We lived together our freshman year, and her mom would make us dinners, and she one day brought us red beans and rice. I didn’t know you had to put the red beans on top of the rice,” Coppola explained. “I was eating them separately, and Kristen called her mom and was like, ‘Mom, they’re eating them separate. That’s so weird.’ And her mom was like, ‘Kristen, tell her.’ Things like that, she just made it so easy and comfortable. Her family, of course, is quite possibly the best group of people I’ve ever met, and they’re so welcoming. They made the transition so easy for me. So, I’ve been really lucky in that sense in that I did get to partner with someone from here to make it easier.”

Coach Brock commends the tandem for having some of the best work ethic he has seen. Over the last couple of years, during the offseason, both Coppola and Nuss have taken it upon themselves to develop their game.

“We began to see there was a level of execution that competition brought out of them. When you put them in a competition environment, something else came out,” Brock says. “The only way I can really put it is they refuse to lose.”

Of all the out-of-state players, graduate transfer Taryn Kloth might have the oddest path to LSU. Before making her debut in Baton Rouge, she attended Creighton University in Omaha, Nebraska. However, her hometown is Sioux Falls, South Dakota. After displaying her talent for her previous university, she headed to Baton Rouge, where she completed her first graduate season, earning 18 wins, eight of those being over ranked teams. Now, in her second graduate season, she will try to find her niche on this senior-laden team.

“When I decided to play beach volleyball, I was thinking anywhere south,” Kloth says. “I wanted to go somewhere warm. I was going on visits, and I came to LSU, and it was just a gut feeling. This is where I belong, and I want to say it’s because of the people too. The team was so welcoming, so fun, so nice, and it seemed like they were all friends. That’s something I really wanted to be a part of.”

Unlike her teammates, Kloth showed up mid-semester as a graduate transfer feeling scared but quickly found out the school she transferred to was the right place to be.

“It was the first day, and I met my roommates, and they were absolutely wonderful,” Kloth says. “We went and got food, and then it was Mardi Gras, so we went to a ball, and we had crawfish. Honestly, everything Louisiana was just thrown at you, and it was amazing, and I just wanted to embrace it all. I feel like everyone here just loves Louisiana if you’re from here, and they really do love their culture and their quirky little things they do.”

These players have adapted to the changes and fallen in love with LSU. It’s just as Brock imagined.

“We’re going to end up finding the ones that need to be here,” Brock says. “We’re not at all tied to a particular region or location. The right kids are in lots of different places, and we’re very open to finding them.”