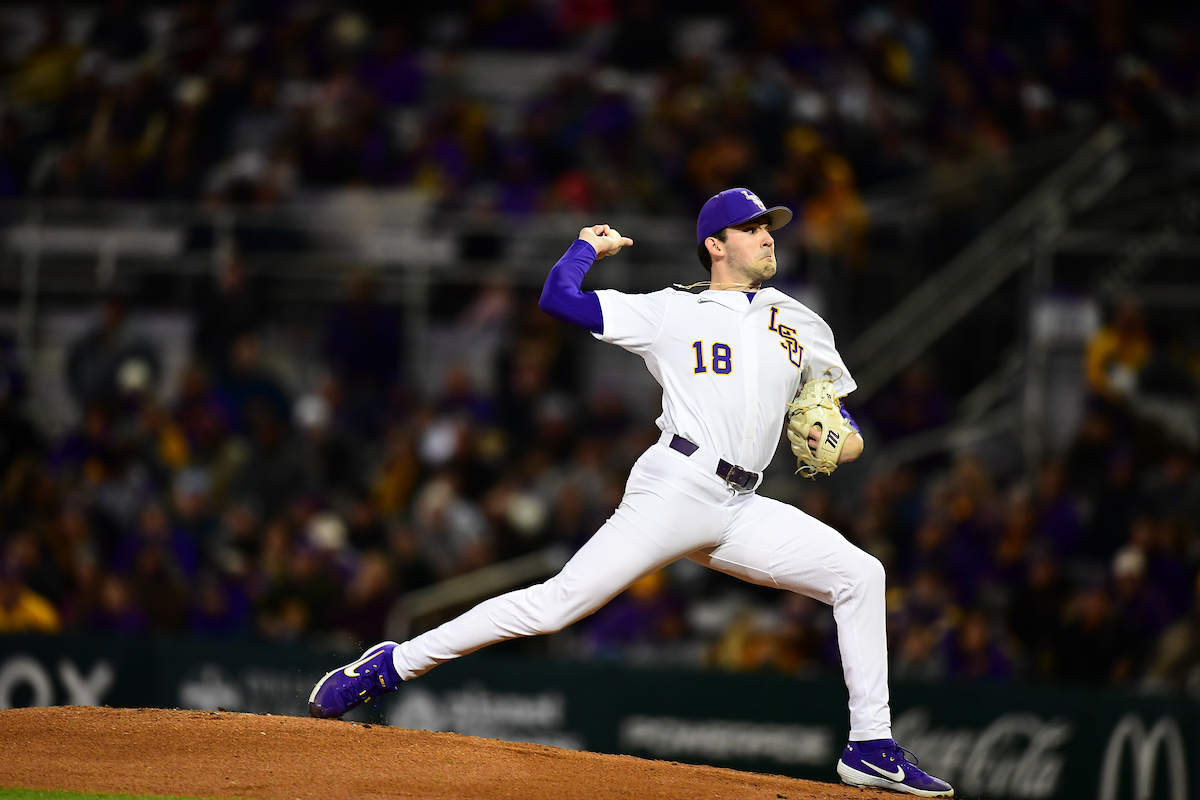 LSU (1-0) will resume play Saturday with a doubleheader against Indiana (0-1) to complete the series. The first game of the twin bill starts  at 1 p.m. CT, with the second game to follow 60 minutes after the completion of the first game.

“I could tell we had some pregame nerves, but once the game started, I thought we really played well tonight,” said LSU coach Paul Mainieri. “Cole Henry was outstanding and got us off to a great start, Cade Doughty’s big swing gave us a lead, and Saul Garza got into one for a three-run homer. We hit a lot of balls hard, made some solid plays on defense and played a pretty good all-around game.”

The Tigers didn’t waste any time as the offense produced two runs in the bottom of the first inning. Centerfielder Daniel Cabrera hit a leadoff single and Doughty followed with a two-run shot over the left field wall. Doughty became the first LSU player to hit a home run in his first career at-bat since Beau Didier accomplished the feat against Villanova on February 21, 2009, at The Box.

LSU struck again in the bottom of the third to extend the lead to 5-0. Doughty drew a one-out walk and third baseman Zack Mathis hit a blooper to shallow right, allowing Doughty to move over to third. With runners on the corners, Garza launched a three-run blast to left field.

Indiana right fielder Ethan Vecrumba reached on a fielding error in the top of the fifth before shortstop Jeremy Houston drew a walk. Designated hitter Drew Ashley grounded out, allowing Houston to move to second and Vecrumba to third. Center fielder Grant Richardson followed with a grounder to second that allowed Vecrumba to score the unearned run.

The Tigers responded with two runs in the sixth inning. Leftfielder Drew Bianco and shortstop Hal Hughes both drew walks, and Cabrera reached on a fielding error by Indiana leftfielder Elijah Dunham. Bianco then scored on a throwing error by Dunham, and Mathis drove home Hughes with a sacrifice fly. The two unearned runs extended the LSU lead to 7-1.

LSU added another run in the eighth on an RBI single from Mathis, who base hit to left scored pinch runner Mitchell Sanford.

Aaron George closed the game with 1.1 innings of work and two strikeouts.

Indiana starter Tommy Sommer (0-1) was charged with the loss, as he surrendered five runs on five hits in four innings with three walks and five strikeouts.