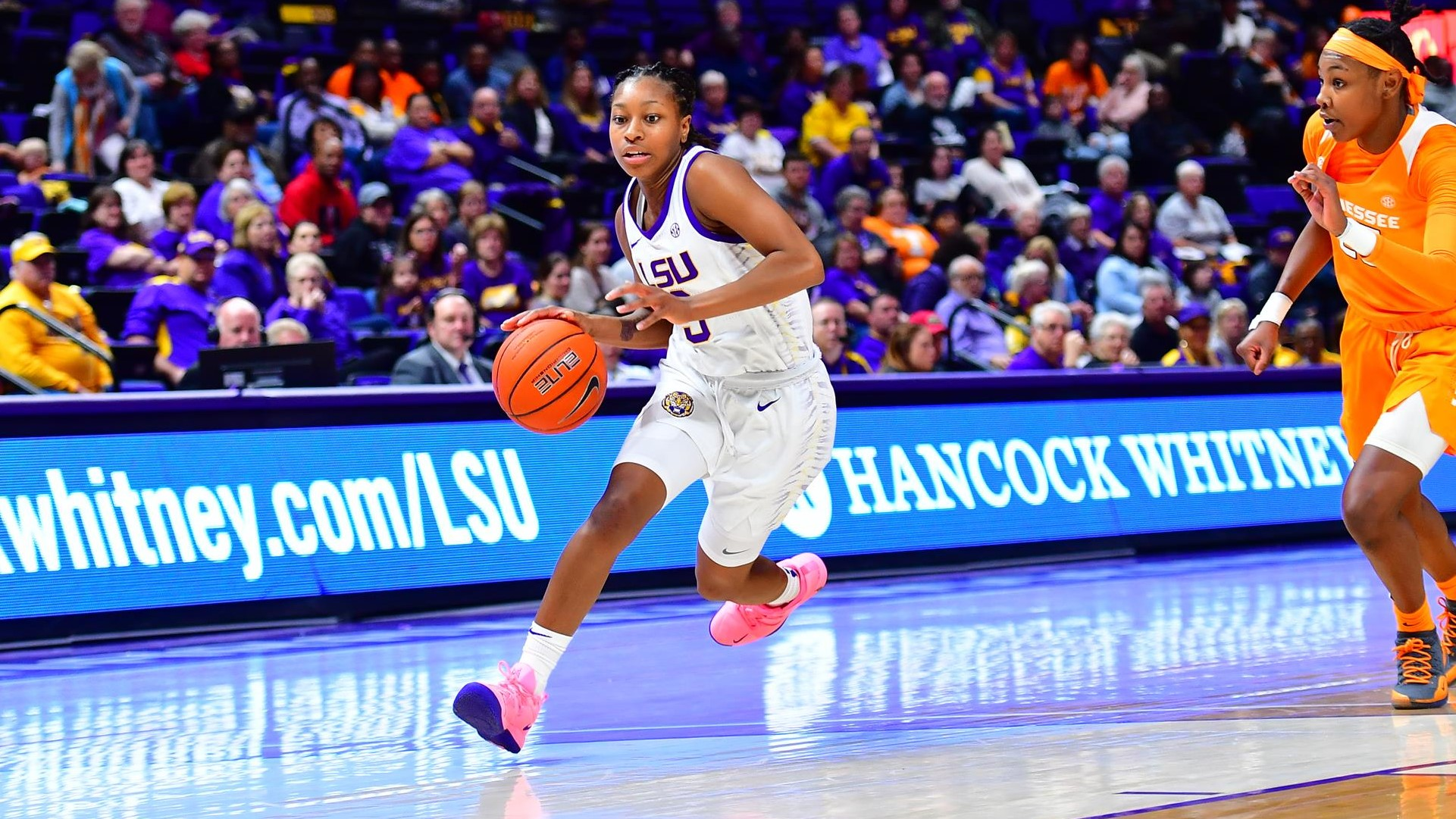 BATON ROUGE – The LSU Women’s Basketball Team took down No. 25 Tennessee Thursday night at the Pete Maravich Assembly Center, 75-65. It was the fifth Top 25 win this season for the Tigers as LSU moves to 18-5 overall and 8-3 for sole possession of third place in the SEC. Tennessee falls to 17-7 overall and 7-4 in the league.

Junior Khayla Pointer led the team with 24 points, 10 rebounds and six assists, earning her third career double-double. Junior Awa Trasi stepped up big for LSU with 22 points on 5-of-10 shooting from beyond the arc to go along with big defensive plays in the second half. Freshman Tiara Young came off the bench to finish with 10 points.

LSU will be at Auburn on Sunday, February 16. Game time is set for 4 p.m. CT on the SEC Network.

On the resiliency of her team…

“Well, it’s really about this team playing like a family and we knew that Tennessee was going to be bigger, longer, tall, but we challenged our team to play as the toughest team. Jaelyn Richard-Harris stands at 5 (foot) 2 (inches), but you cannot measure the toughness of how she plays, and the rest of this team plays. There were a lot of key plays defensively; we had some really good stops where we were able to out-rebound a very big team. In the first half, when Faustine (Aifuwa) went out, and we didn’t have her the whole second quarter, our bench stepped up and did a fabulous job to come away with this win.”

“We were able to spread them more, and we were able to open up some lanes because we went with five-out look, and when your five-man is Awa Trasi, who can stroke the three, it pulls their size away from the basket. I thought that Mercedes Brooks came in and gave us some valuable minutes, and so did Tiara Young. But, again, it’s a team effort and tonight we had different players do some big-time things. We always say, ‘Next man up, next man up.’ You don’t know when your number’s going to be called, but when it’s called be ready. This group had their number called; we hit a little adversity, but we stayed together.”

“She stepped up in a big-time way, and she’s someone who can expose you if you’re not good with your bigs defending away from the basketball. She’s also playing with Khayla Pointer, we put those two in high ball screen action so if you don’t help on Khayla, she’s going to get to the hole and if you do help on Khayla, then you have the pop man. We ran a lot of our action with our high ball screen. We thought pulling their size away would give us better dribble-drive lanes, and it also give us better rebounding. For us to get 13 offensive rebounds on a team that’s clearly taller than us says a lot about how tough we are.”

On the lack of turnovers…

“We did a really a good job of taking care of the basketball. We didn’t give them as many easy looks as we did at their place in transition. I thought that was key for us to eliminate that. We need to do a little better at the free throw line. Late game, they started fouling us; we made just enough of them to keep our lead.”