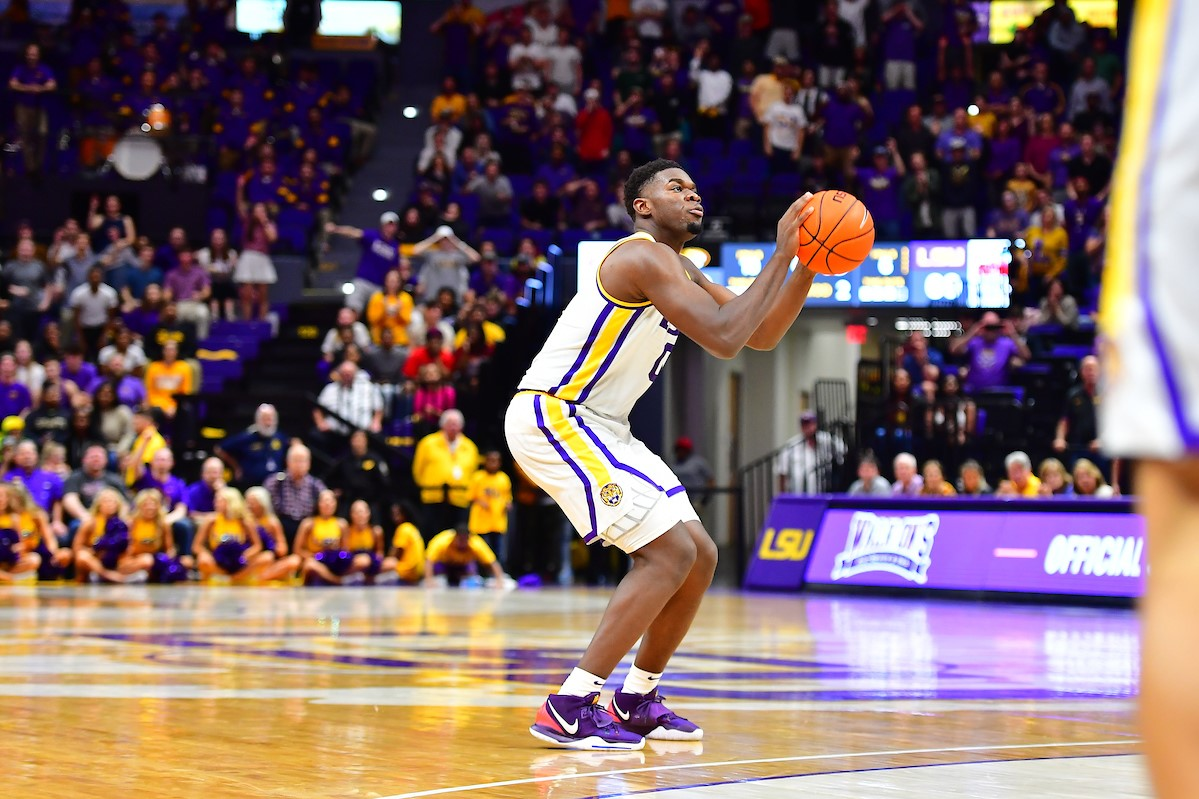 BATON ROUGE – No. 25 LSU trailed for nearly 33 minutes before the Tigers rallied in the last six minutes to score an 82-78 win over Missouri Tuesday night at the Pete Maravich Assembly Center.

LSU is now 18-6 on the year and 9-2 in the SEC, tied with Kentucky after the Wildcats won at Vanderbilt earlier on Tuesday. Auburn is a half-a-game behind entering a Wednesday night home game with Alabama.

LSU was able to gradually whittle down that margin behind the play of Javonte Smart who scored nine-of-11 points in a stretch that took LSU from that eight-point deficit to two-points down at 69-67 with 6:41 to play.

LSU would lead by as much as five in the final minutes to wrap up the contest.

After Skylar Mays scored 23 points on 7-11 shooting, @emilyvdixon caught up with the senior to Drive The Lane following LSU’s win over Missouri. pic.twitter.com/3HZeQDEuN5

For the second straight game, all five starters were in double figures topped by Mays with 23 points on 7-of-11 shooting, one three-pointer and 8-of-9 at the free throw line.  Days had another double double with a 20 point-10 rebound performances hitting 5-of-9 from the field, with one trey and a perfect 9-of-9 at the free throw line. Smart had 15 points and Trendon Watford and Emmitt Williams each scored 11.

LSU was out rebounded 32-31 but had an 18-7 advantage in points off turnovers.

Dru Smith led Missouri with 20 points while Reed Nikko had 13 points and a team high eight boards. Javon Pickett and Mitchell Smith had 10 points each.

The Tigers will go on the road Saturday to Tuscaloosa to face Alabama at 3 p.m. LSU will return home next Tuesday to host Kentucky at 8 p.m. Tickets are available at LSUTix.net.

On Darius Days’ 20-point and 10-rebound performance…
“When he’s not in foul trouble, that’s what he can do every game. But he puts himself in tough spots and then he gets tough calls a lot of the time. When he’s not in foul trouble, he’s capable of doing that every game for us. I’m really proud of him. That’s back-to-back really good games for him. It’s kind of been up and down for him. The balance of our team showed again tonight. We had five guys in double figures. We’ve got to get more from our bench. Hopefully we’ll have Charles (Manning Jr.) back on Saturday. We’ll need him back bad because we need some help on our bench. I though Marshall Graves played really good minutes for us tonight. I thought he was probably our best guy off the bench tonight because he was solid, but we need some help. It’s going to be hard to keep winning with just five guys. Our bench guys need to step up and help us.”

LSU Guard Skylar Mays
On the slow start to the game…
“Missouri deserves the credit. They’re a great defensive team. They made us play a lot of one-on-one and we play our best basketball when we can get the ball moving and attack closeouts, but we were able to figure it out and score enough points to win.”
On how important it is for LSU to get to the free-throw line…
“That’s what we do. Like people have said before, we have four monsters who are great on the offensive glass. It’s easy to shoot with confidence knowing that your teammates are going to get it. We take pride in getting by guys, being unselfish, attacking closeouts and taking high percentage shots.”

LSU Guard Javonte Smart
On scoring nine straight in the second half…
“I kind of came out slow today. Skylar Mays, sitting right over there, told me to get going and that the team needs my energy. I tried to give that and get the victory.”

LSU Forward Darius Days
On his game-sealing shot…
“That was more of a prayer than anything. It went in though, and the whole crowd was into it. I feel like we gained momentum, ran with it, and won the game.”

On what Javonte (Smart) brought to the game…
“He gave us a spark and we loaded up. We talked about it and he just told us to keep going. Skylar (Mays) and Javonte (Smart) are our leaders and we’re going to follow them to the end. Nothing crazy about it. Follow them, do what we’re supposed to do, and win the game.”

“Well, he’s big and physical. He took his time and was patient. He wants to get to his spots.  He strong enough, he’s athletic enough to get the shot off. Williams is a talented player, he’s a physical guy. I think it makes (Emmitt) Williams tough to go against, he has low-body base and he knows how to move guys. Reed (Nikko) uses lower-body strength to make good plays. When he gets put backs, he understands, he knows.”

“It’s certainly not easy. That’s one of the things that they do. They’re one of the few teams, in my opinion, that if the three ball is falling or not it’s really doesn’t matter because they can get to the free-throw line. They can make it up that way; they can get to the rim and get the offensive rebounds. We knew that. They do a great job of getting downhill with their guards. I think they’re the only team, in our league, where you have five guys and make plays off the dribble. When that happens, you steady driving the ball. In most cases Reed (Nikko) guarding Williams is not accustomed to guarding fives that can go off the dribble all the time. I thought he did a solid job.”

On looking like Missouri got gassed down the stretch …

“I’m not sure we got gassed. I just think it was a case of playing against a good team and room for error is very slim and everything counts. We had the ball in a couple guys hands in vulnerable situations for those particular guys. Other than that I thought we battled. We got to get those key offensive rebounds. Critical stops when you need them. Its easier said than done but I didn’t think we got gassed. I felt like they made the plays down the stretch to win the game.”