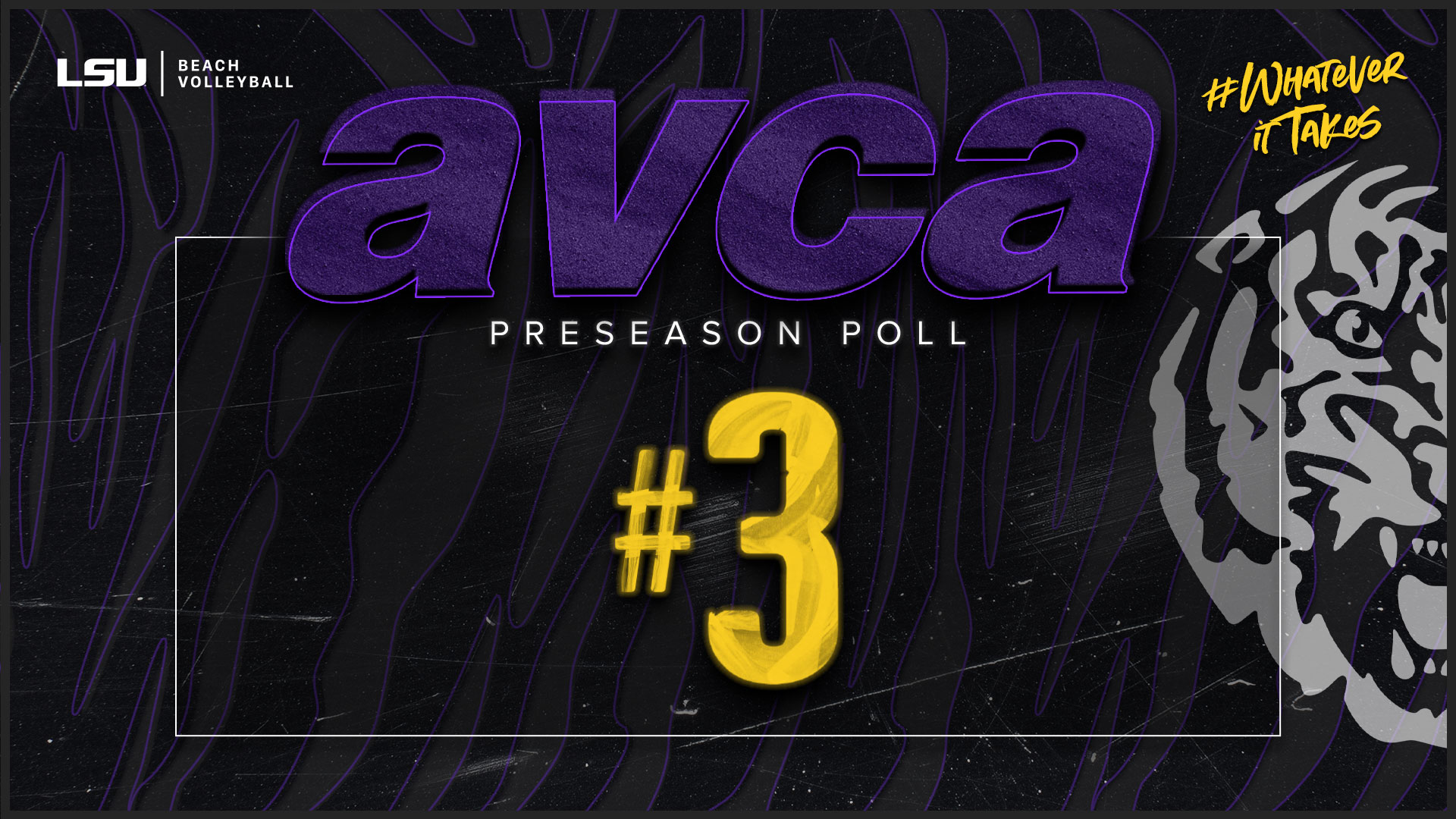 BATON ROUGE – LSU is beginning the 2020 season in the same spot it finished 2019, as the No. 3 team in the American Volleyball Coaches Association Poll, released Monday afternoon.

This is the 37th straight week that the Tigers have been in the AVCA Top-20 and the 10th week in a row that they are in the Top-10. LSU received one first place vote as it heads into the season.

LSU was ranked No. 2 in the DiG Magazine poll in January and came in at No. 3 last week in the collegebeachvb.com poll.

The three top-three rankings come as the Tigers enter the 2020 season with more returning talent than ever before. LSU returns a majority of its roster from last year’s team that took the Tigers to their first ever semi-finals appearance at the NCAA Championship.

For the fourth and final season, Claire Coppola and Kristen Nuss will lead the Tigers on Court 1. Named as preseason All-Americans by both CBVB and VolleyballMag, the seniors enter their final season with a 91-19 record having competed together in every match at LSU.

Junior Hunter Domanski returns after posting a 29-8 record in during her sophomore season last year. In her first two seasons, Domanski has won 47 matches on a combination of every court except Court 1.

Domanski and her main 2019 partner Allison Coens were 22-6 together, earning AVCA Top-Flight Status on Court 5 for winning at least 75-percent of their matches on that court.

Coens is a sophomore from Lenexa, Kansas who returns after a 23-6 freshman campaign that landed her on the CCSA All-Freshmen Team.

Toni Rodriguez is a senior who played indoor volleyball for the Tigers before joining the beach squad last season. In her first full season playing beach volleyball, Rodriguez used her length to excel at the net, going 21-14. She earned a spot on the 2019 CCSA All-Tournament Team with Ashlyn Rasnick-Pope when they went 4-0 throughout the weekend and LSU finished as the runner-up. Rasnick-Pope enters her sophomore season after she picked up 18 wins last year.

Taryn Kloth joined LSU prior to last season as a graduate transfer from Creighton. Entering her final year of eligibility, Kloth is looking to build upon her 18-9 record from 2019.

Kelli Agnew joined Coens on the CCSA All-Freshmen Team least year after winning 15 matches for the Tigers between Courts 2, 3 and 4.

Olivia Powers is entering her senior season with 56 career victories to her name, eighth on LSU’s all-time individual win’s list.

On top of all the talent that is returning, Coach Russell Brock also brought in a class of five freshmen with significant beach experience and added a graduate transfer from Iowa State, Jess Schaben, who could make a big impact in the sand.

LSU will host the Purple vs. Gold Scrimmage this Saturday, February 15, at LSU Beach Volleyball Stadium. The Tigers will officially begin their 2020 season on February 22 in Honolulu, Hawaii for the Duke Kahanamoku Beach Classic on Queens Beach where LSU will face No. 1 UCLA, No. 5 Hawaii and No. 19 Stanford.

LSU’s first home competition, the Tiger Beach Challenge, will be February 29-March 1. The Tigers will have five matches that weekend, including a match for the second straight weekend against top-ranked UCLA the 29th at 5:30 p.m. CT. LSU will also face Houston Baptist, Texas A&M – Corpus Christi, Tulane and Spring Hill College during the weekend.