Women’s Hoops Host Missouri For Pack The PMAC On Monday 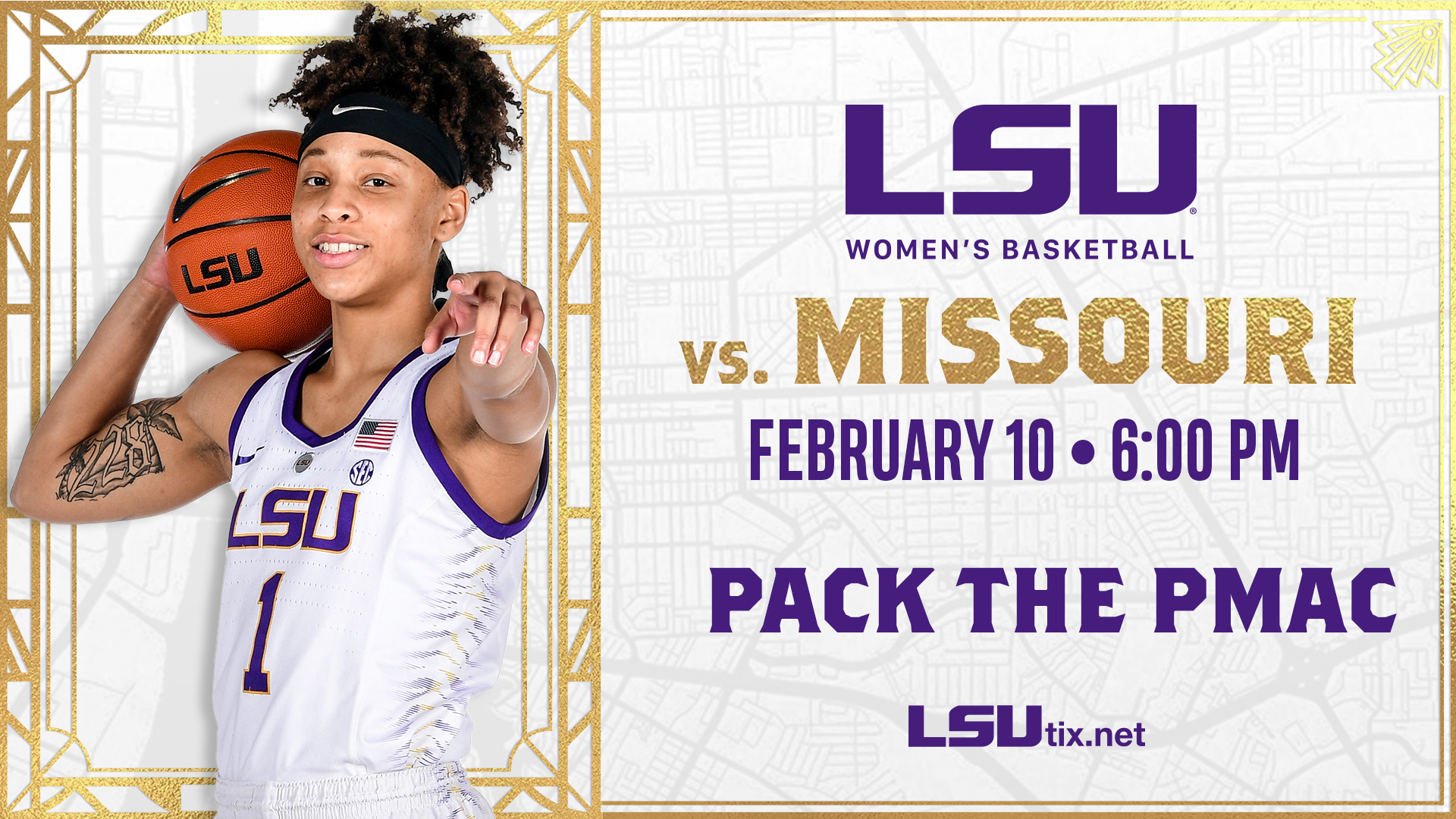 BATON ROUGE – The LSU women’s basketball team will host Missouri on Monday night for Pack the PMAC. It is the second game of the Tigers’ current three-game homestand. Game time on February 10 is set for 6 p.m. CT. Tickets for the game are available for $1.

Fans will also be able to take pictures with the 2020 NCAA Women’s Basketball National Championship trophy in the Tiger Den during the game. The 2020 Women’s Final Four will be in New Orleans, April 3 and 5, at the Smoothie King Center.

Monday’s game will be broadcast on the SEC Network and is available on the ESPN app with Brenda VanLengen and Christy Thomaskutty calling the action. Fans can also listen to Patrick Wright call the game on the LSU Sports Radio Network. Wright is in his 30th season as the “Voice of the Lady Tigers” and is joined on home broadcasts by Jeff Palermo. Fans can listen on 107.3 FM and audio broadcasts are available online at LSUSports.net/live. Live stats will be available at LSUsports.net.

LSU, currently receiving votes in the Associated Press and USA Today/WBCA Coaches Polls, beat Texas A&M at the PMAC on February 2, 59-58. Redshirt junior Faustine Aifuwa grabbed a career-high 16 rebounds and scored a season-best 18 points for her third double-double of the season. Junior Khayla Pointer hit the 800-career points milestone in the fourth quarter and ended up with 18 points in the game.

Redshirt senior Ayana Mitchell suffered a season-ending knee injury in the game on February 2, ending her career as one of the most prolific women’s basketball players in Tiger history. The Conyers, Georgia native will finish at No. 6 on LSU’s all-time rebounding list with 911 rebounds, one of only six LSU players to hit the 900-career rebounds milestone. She is ranked No. 22 on LSU’s all-time scoring list with 1,275 points and her 59.5 career field goal percentage will rank third on the LSU all-time list. An All-SEC performer, Mitchell’s 36 career double-doubles ranks among the most in LSU history.

Pointer leads the squad from the point with 15.1 points and 4.4 assists per game. She has the best free throw shooting percentage on the squad at 70.7 and the most steals with 50.

Aifuwa is having a solid season in the paint for LSU. Aifuwa is third on the team with 9.8 points per game. She is sporting a 48.9 field goal percentage to go along with 8.0 rebounds per game and 34 blocked shots.

LSU continues its solid play on defense, having held opponents to 50 points or under five times and 14 opponents at 60 or under so far this season and winning the battle of the boards in 18 games played.

Bench play continues to be a strength as the season has progressed. The LSU bench has outscored opponents 394-285 over the first 21 games of the season.

This will be the second meeting of the season between LSU and Missouri. Missouri won the first meeting in Columbia, 69-65 on January 5.

Three players are scoring double figures for Missouri – Aijha Blackwell (13.8), Amber Smith (12.4) and Hayley Frank (11.8) points per game. Blackwell and Smith also lead the team in rebounds per game with 6.3 and 6.0, respectively.

The Tigers host No. 23 Tennessee on Thursday, February 13 at the PMAC with game time set for 6:30 p.m. Fans can purchase tickets for all games at LSUtix.net.