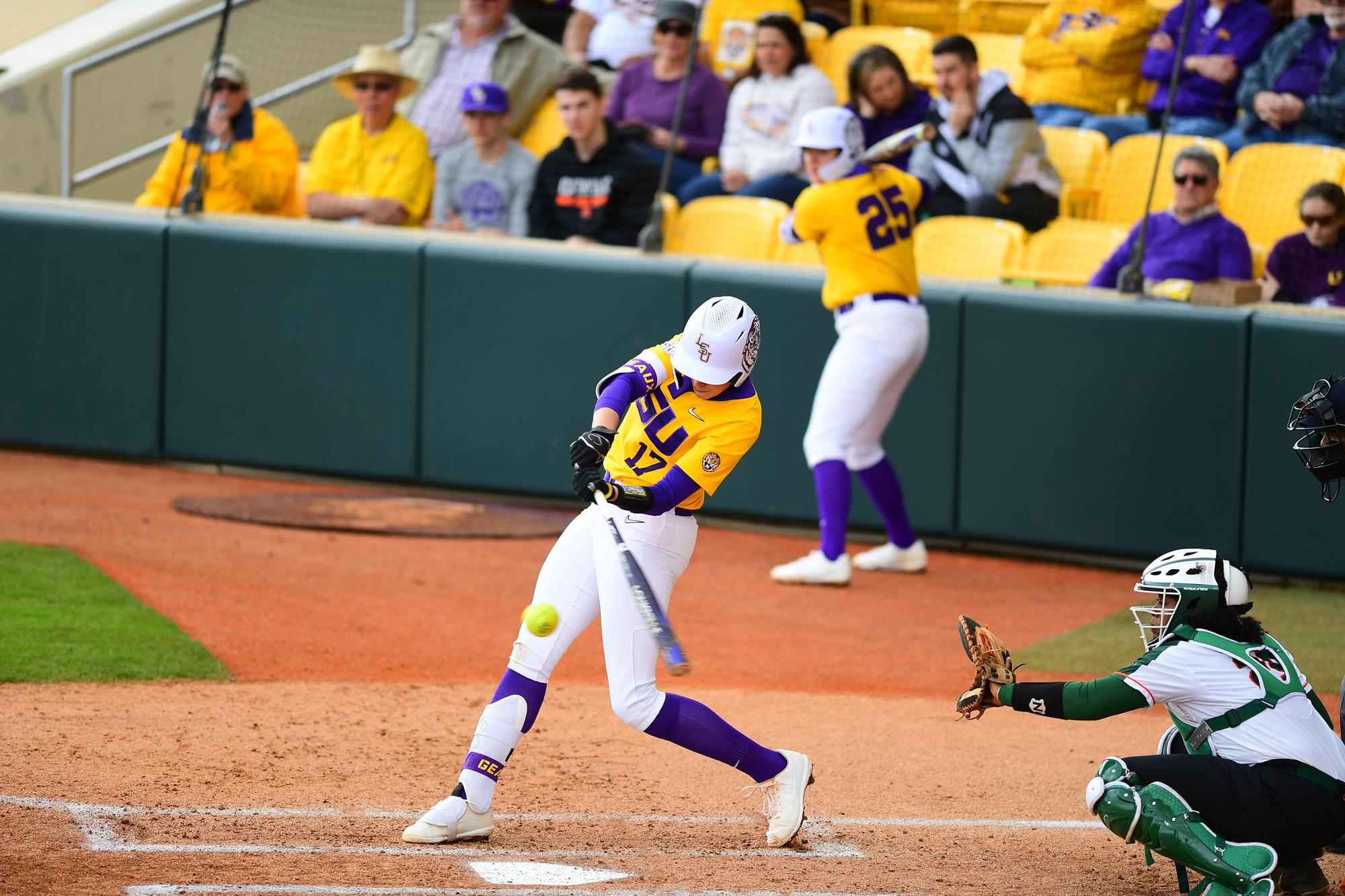 BATON ROUGE – The No. 11 LSU softball team no-hit Florida A&M 16-0 in five innings Sunday afternoon in Tiger Park. The Tigers move to 5-0 on the season and the Lady Rattlers fall to 0-4 on the year

The Tigers’ offense shined in the second inning as they scored 15 runs. Doyle got things started in the bottom of the second as she led off with a single and advanced to second on a wild pitch. She would score on a double down the left field line by Taylor Tidwell. Tidwell came in to score off of Cait Calland’s triple to left.

The offense continued with a Ciara Briggs RBI single through the left side. The Tigers ended up having bases loaded after a Georgia Clark walk and Shelbi Sunseri smashed a double off the right-center wall to drive in Savannah Stewart and Pleasants. Clark crossed the plate as Claire Weinberger drew a walk and two more Tigers came across off Tidwell’s second at-bat of the inning, a double down the right field line.

The Tigers capitalized on a throwing error, bringing in Weinberger. Karrington Houshmandzadeh tripled down the left field line to clear the bases and increase the LSU lead to 15-0.

Another run came across in the third as Calland singled to left with one out and scored on a Pleasants single to center, capping the Tigers offense at 16-0.

Ali Kilponen had a perfect game in the circle through three innings, shutting down nine straight Florida A&M batters. She also tallied five strikeouts through three innings. She is now 1-0 on the season. Taylor Edwards and Victoria Abrams both saw their first career starts in the circle for the Tigers, each tallying one strikeout. All three combined for the no-hitter, the first combined no-hitter with three pitchers in program history.

Torina’s Thoughts
On what she liked most out of her team’s performance…
“Well, I like seeing a lot of different players today, and I thought everybody stepped up and did their job. That was exciting, you know, I liked what the freshmen class brought to us this weekend. I thought that was really nice. I think, you know, before the first game, everybody’s asking, ‘How’s the team going to be, how’s the team going to be’ and I think we proved the team’s going to be OK.”

On Ali Kilponen…
“I think she was fabulous all weekend. I think she is a really special player and person. I pulled her out of a perfect game, which is a terrible thing to do to somebody. But, she wanted to come out because she wanted the other kids to have an opportunity, and it’s rare that you get a player like that, rare that you get a pitcher like that, but she is special and we are lucky to have her.”

On the second inning…
“Yeah, we’ve had a couple of those in our time, you know, but I think it’s just a nice opportunity to let kids that work equally as hard have some opportunities. I mean, all of our kids work hard, so it’s nice to give some people opportunities. We were able to get everyone in at some point this weekend. Every kid on the team played this weekend, which is an amazing opportunity, so I think it’s only going to make us stronger moving forward, that everybody will be seasoned, have an at-bat in the game, has pitched in a game, those kinds of things. I think it will make us stronger moving forward in an opportunity like this.”

On the freshman pitching appearances…
“I thought it was fun, you know, I enjoyed seeing Taylor Edwards come out, she throws so hard, and then, you know I thought Victoria (Abrams) was able to fight through some nerves. I didn’t think she looked nervous at all really, so you know it’s nice to get them out there; you just never know how throughout the course of a season how you might end up needing somebody or using somebody.”

The Tigers take on Samford Friday at 6 p.m. to start play in the LSU Invitational tournament. This game will stream live on SEC Network+ and WatchESPN. The tournament will continue on Saturday when the Tigers travel to Lafayette to take on the ULL at 4 p.m. in Lamson Park. You can watch this game via Live Stats. The Tigers will finish the weekend at home taking on North Dakota at 12:30 p.m. and matching up with ULL again at 3 p.m. These two games will be streamed on SEC Network+ and WatchESPN.