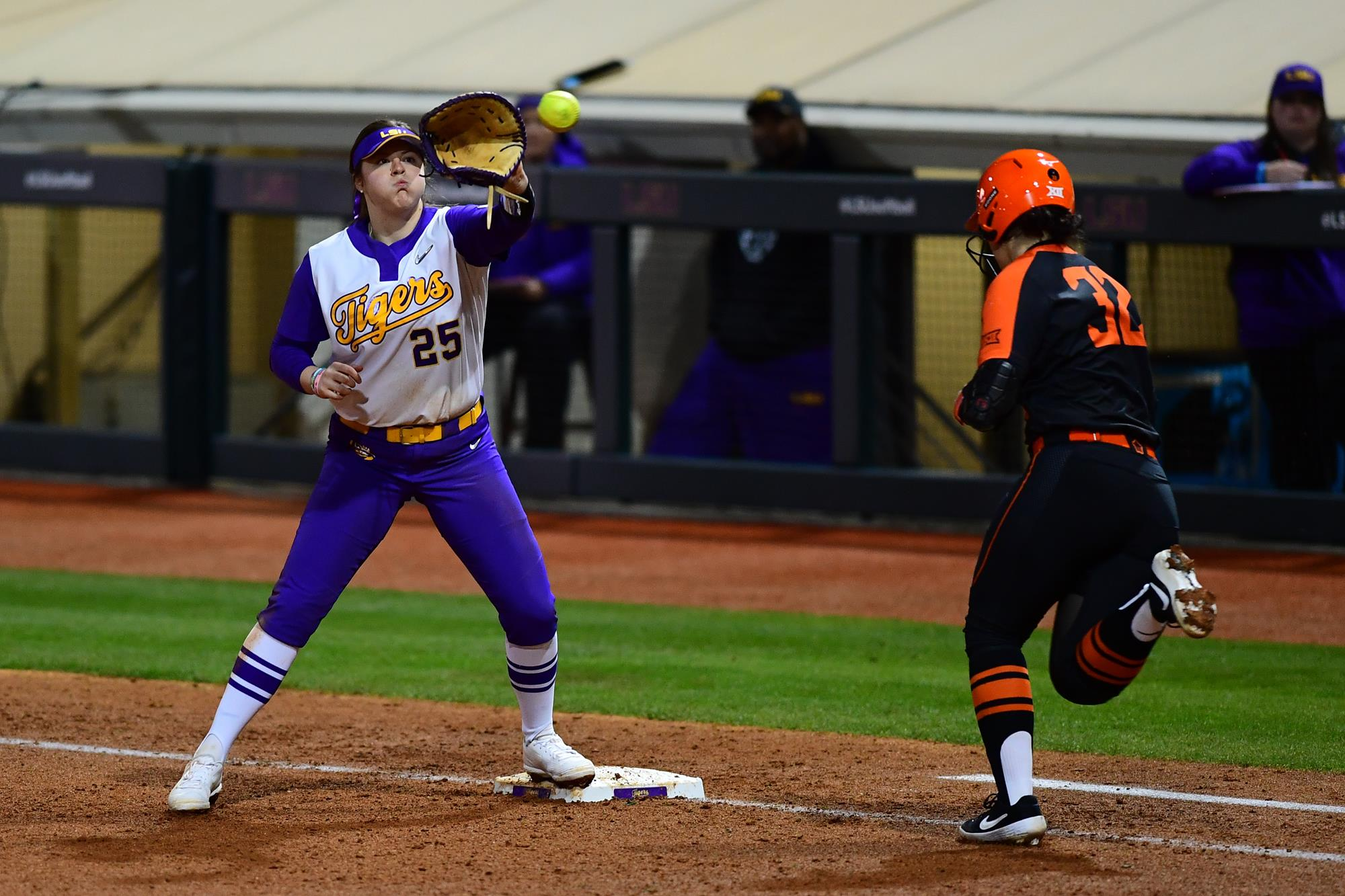 BATON ROUGE – The No. 11 LSU softball team shutout No. 13 Oklahoma State 1-0 Friday evening in Tiger Park to start off the 2020 Tiger Classic. The Tigers are now 2-0 on the season and Oklahoma State falls to 0-1.

Oklahoma State threatened first in the second inning as they loaded the bases with one out, but clutch defense got the Tigers out of the inning. Georgia Clark caught a hard line drive and then dove to double off the runner on first.

Stellar pitching continued as Shelby Wickersham came through for the Tigers in the top of the fourth sitting Oklahoma State down in order and ended the inning with her second strikeout on the night.

In the fourth, Clark put together her first hit of the game, singling to the left-center gap. Amanda Doyle walked to put runners on first and second. The two would advance on a passed ball, but a ground out ended the threat.

In the bottom of the sixth, Savannah Stewart led off with a single to right center and then advanced to second on a wild pitch. Clark singled through the left side to plate Stewart from second. Clark took second on the throw and the Tigers took a 1-0 lead.

The Cowgirls put runners on second and third in the top of the seventh and Ali Kilponen entered to relieve Wickersham. Kilponen recorded a huge strikeout to give the Tigers two outs and ended the game on an infield popup, giving the Tigers their second win of the year.

Wickersham earned the win in the circle, improving to 1-0 on the year. She allowed no runs and recorded four strikeouts. Oklahoma State’s Carrie Eberle took the loss for the Cowgirls allowing one earned run. Kilponen earned her second save on the season.

On being 2-0 with such a young team …
“I thought it was a good battle and a good win.  I liked that the pitching staff was able to keep us in it long enough to score.  Their pitcher is very talented.  She was throwing really hard.  I think when it’s all said and done at the end of the year this is going to end up being a big win.”

On shutting them out with their talented offense …
“Our pitching staff was phenomenal.  Shelby Wickersham showed a lot of depth in the game.  She was changing speeds, moving the ball around the zone, and did a really nice job out there.  I liked that a lot of the things that she worked on in the off-season showed up today.  That was really exciting and cool for her.  Ali Kilponen having back-to-back days with the same type of outing is a really special thing for us.”

On beating a ranked team so early in the season with such a young team …
“It’s a big win.  Like I said, when it comes down to the end of the season we’re going to look back on it and think it was still a good win.  They’re a good team and they’re going to have a good year.  It’s going to pay dividends as we move forward.”

On Ali (Kilponen) embracing her role as a young pitcher …
“It looks like we might have a closer.  I better call (Coach Paul) Mainieri and ask how to manage this situation, I have no idea.  She’s pretty good in that spot and we won’t hesitate to use her there.”

On what makes Georgia (Clark) the great player that she is …
“Yeah she’s a good player and she’s a great hitter.  I think giving her consistent at bats throughout the season is going to make her really strong.  Last year she was in a pinch-hit roll which is a really hard roll to be in no matter how good you are.  I think given her consistent at-bats day-to-day throughout the season we’re going to see really special things.”

The Tigers continue play in the Tiger Classic Saturday taking on Florida A&M at 1:30 p.m. and matching up with Oklahoma State again at 4 p.m. The Tigers will close out the weekend Sunday against Florida A&M at 1 p.m. These games will be streamed through SEC Network+ and WatchESPN.