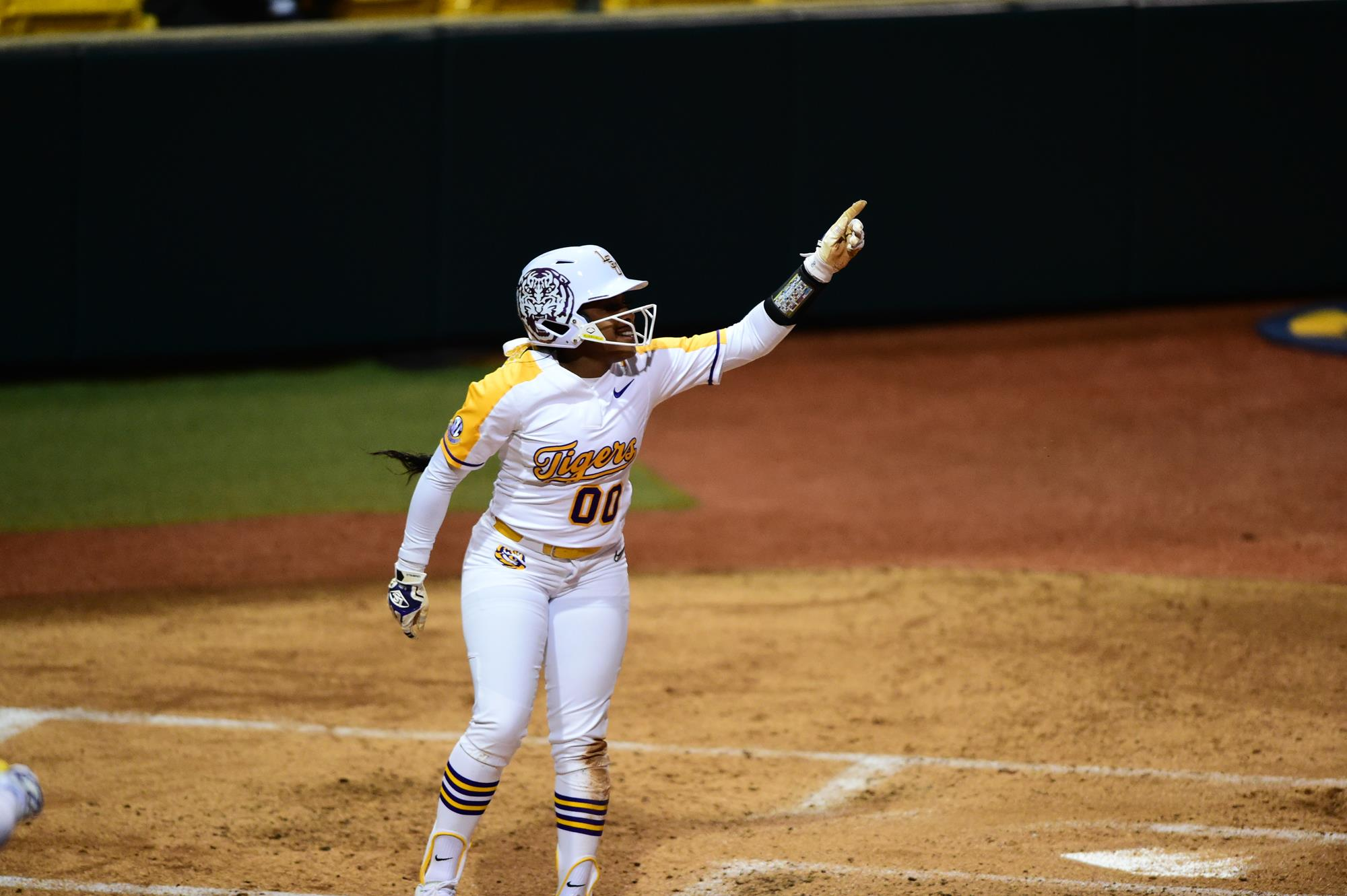 BATON ROUGE – The No. 11 LSU softball team defeated Central Arkansas 3-2 Thursday evening in Tiger Park to open the 2020 season. The Tigers are now 1-0 on the year, while Central Arkansas drops to 0-1.

In the top of the first, the Bears plated one run early off a sacrifice fly. The Tigers couldn’t get anything going in the bottom half of the inning, but junior Shelbi Sunseri built momentum in the circle, shutting down the Bears in order in the second.

Sophomore Georgia Clark came up big for LSU in the bottom of the second with a walk, marking the first base runner for the Tigers in 2020. Amanda Doyle doubled down the right field line to knock in pinch runner Akiya Thymes from first, evening the score at one apiece.

Sophomore Taylor Tidwell was hit by a pitch and advanced to first to put runners on first and second for the Tigers. Junior Taryn Antoine hit a hard ground ball to shortstop and the Tigers were able to plate another run on a Central Arkansas throwing error, taking a 2-1 lead.

Clark once again came up clutch, smashing her first career home run over the center field wall. That dinger helped the Tigers take a 3-1 lead. Freshman Taylor Pleasants made some noise in the bottom of the fourth with her first career hit, a double to the right center gap.

The Bears gained some momentum in the top of the sixth and put runners on the corners after a couple of miscues by the Tigers. The Bears capitalized and scored on another sacrifice fly, but LSU got out of the inning.

Ali Kilponen entered the game in the top of the seventh to relieve Sunseri, and closed out the game with back-to-back strikeouts to seal the deal for the Tigers, her first career save.

Sunseri earned the win in the circle, improving to 1-0 on the year. She allowed two runs, none earned, and tallied one strikeout. Central Arkansas’ Rio Sanchez took the loss, allowing three runs, two earned.

Torina’s Thoughts
On getting the first win of the season …

“I think it’s really important.  We did some things to make sure we could do that.  We ran Akiya Thymes there in the second inning, which we don’t normally do.  Let’s get that first run across, knock that thing out.”

On getting the nerves out with a young infield …

On swinging the bat well and only getting three hits …

“Yeah I thought we swung the bat well.  I think there were some opportunities that we missed, but again, we’ve got plenty of things that we can do better.  I think it was better than that number shows.”

“That was awesome.  Georgia’s (Clark) ball was as hard a hit ball as I feel like I’ve ever seen.  I had no idea that was going to get out.  It was fun to see her do that.  It was good to get, not a monkey off her back, but she knows that’s her job, to hit for power for us.  Good for her to produce for us in the first game.”

On Shelby and Ali’s performance …

“I think they both did their job and they did it perfectly.  You know I think that Shelbi’s (Sunseri) job is to go out and be our leader and to carry us.  She’s going to be our one that’s wracking up wins.  I think that’s why we have an Ali (Kilponen) to come in and shut the door like that.  That’s the way you shut the door. That was really impressive the way she came in the game. “