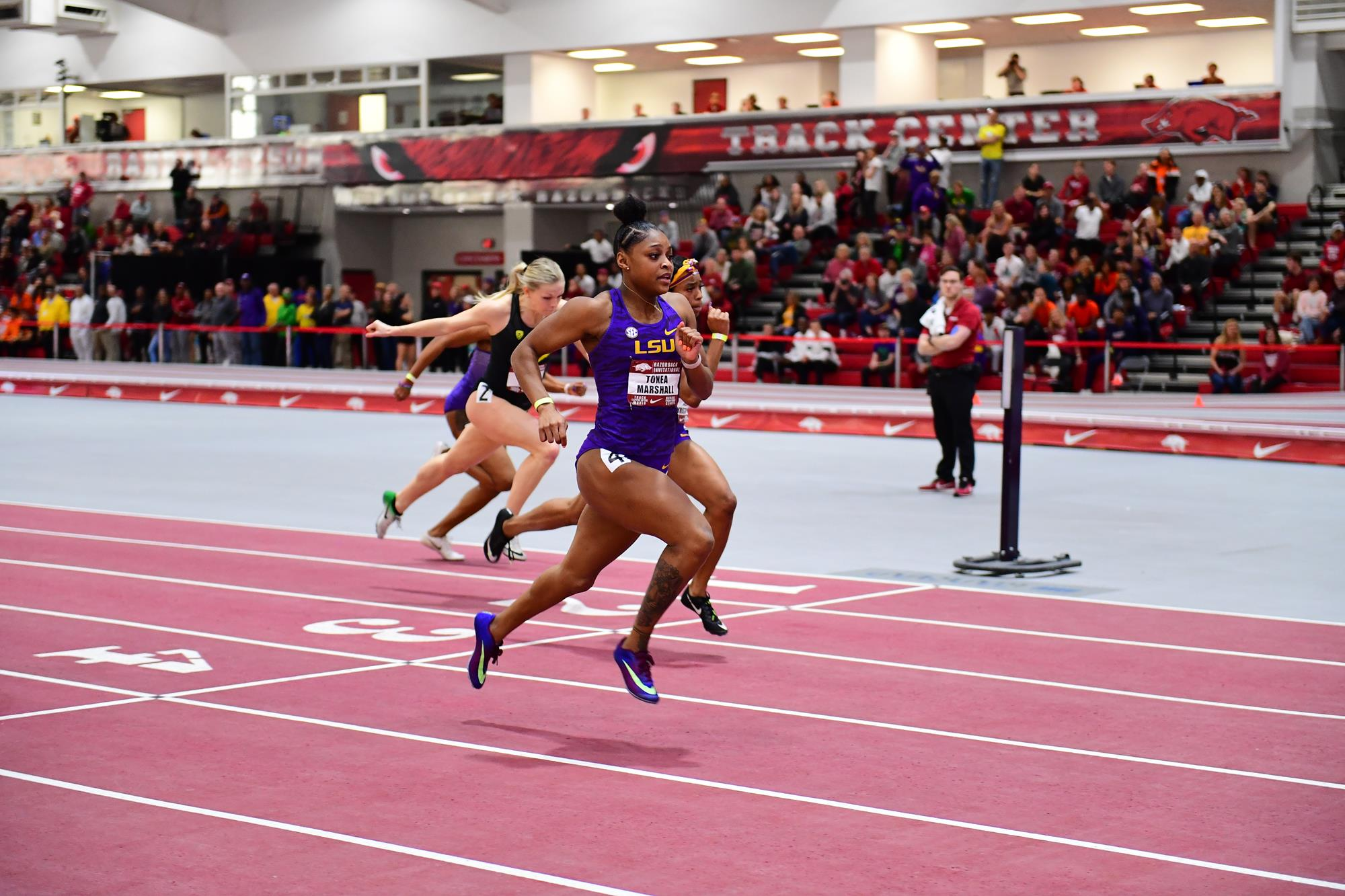 Fayetteville, Ark. – It was a 1-2-3 sweep in the women’s 60 meter hurdles that highlighted the second and final day of the Razorback Invitational for the LSU track and field program. Tonea Marshall won the race and was followed by Alia Armstrong (second place) and Brittley Humphrey (third place).

Marshall, the LSU school record holder, crossed the finish line with a time of 7.92 to go sub eight seconds for the third time in a row (she ran a 7.98 in prelims on Saturday). Alia Armstrong ran a personal best of 8.07 seconds to take silver, and Humphrey ran a season best of 8.13 to garner bronze. Marshall (No. 1), Armstrong (No. 3), and Humphrey (No. 6) own three of the top six times in the NCAA this season. Armstrong’s time of 8.07 also nudged her into the LSU top-10 list at the No. 10 spot.

In the men’s 60 meter hurdles, it was Eric Edwards Jr. who came away with his second title of the season in the event. He clocked a personal best of 7.66 to win the race; the 7.66 is the third fastest in the NCAA this season, and it also ranks tied for third on the LSU list with teammate Damion Thomas. Thomas clocked a 7.76 in the final for third place, and teammate Arthur Price ran a personal best of 7.81 to take sixth. Price’s lifetime best in the event ranks him No. 9 on the LSU list.

Tyler Terry ran his first quarter mile of 2020 and took second place with a time of 46.54; that mark ranks No. 6 in the NCAA. Amber Anning ran a stellar collegiate opener in the 400 meters with a readout of 53.11 to earn bronze. The 53.11 rates as the seventh fastest in the NCAA. In the finals of the women’s 60 meter dash, Thelma Davies ran a 7.31 for fourth, and Symone Mason was right behind for fifth with a 7.33.

Sophomore distance runner Julia Palin ran her first 3,000 meter race of the 2020 season and clocked a personal best of 9:46.99 to place ninth in the invitational portion of the event. Her personal best ranks as the fifth-fastest time in program history. Freshman Davis Bove continued his winning ways as he won the mile with a personal best of 4:08.88; he is now 3-0 this season with two wins in the 800 meters and today’s dub in the mile.

The No. 6 LSU women won the team competition with 96 points, and the No. 2 LSU men placed fifth with 70 points

The Tigers will have an off week and then return back to Fayetteville for the Tyson Invitational on Feb. 14-15.