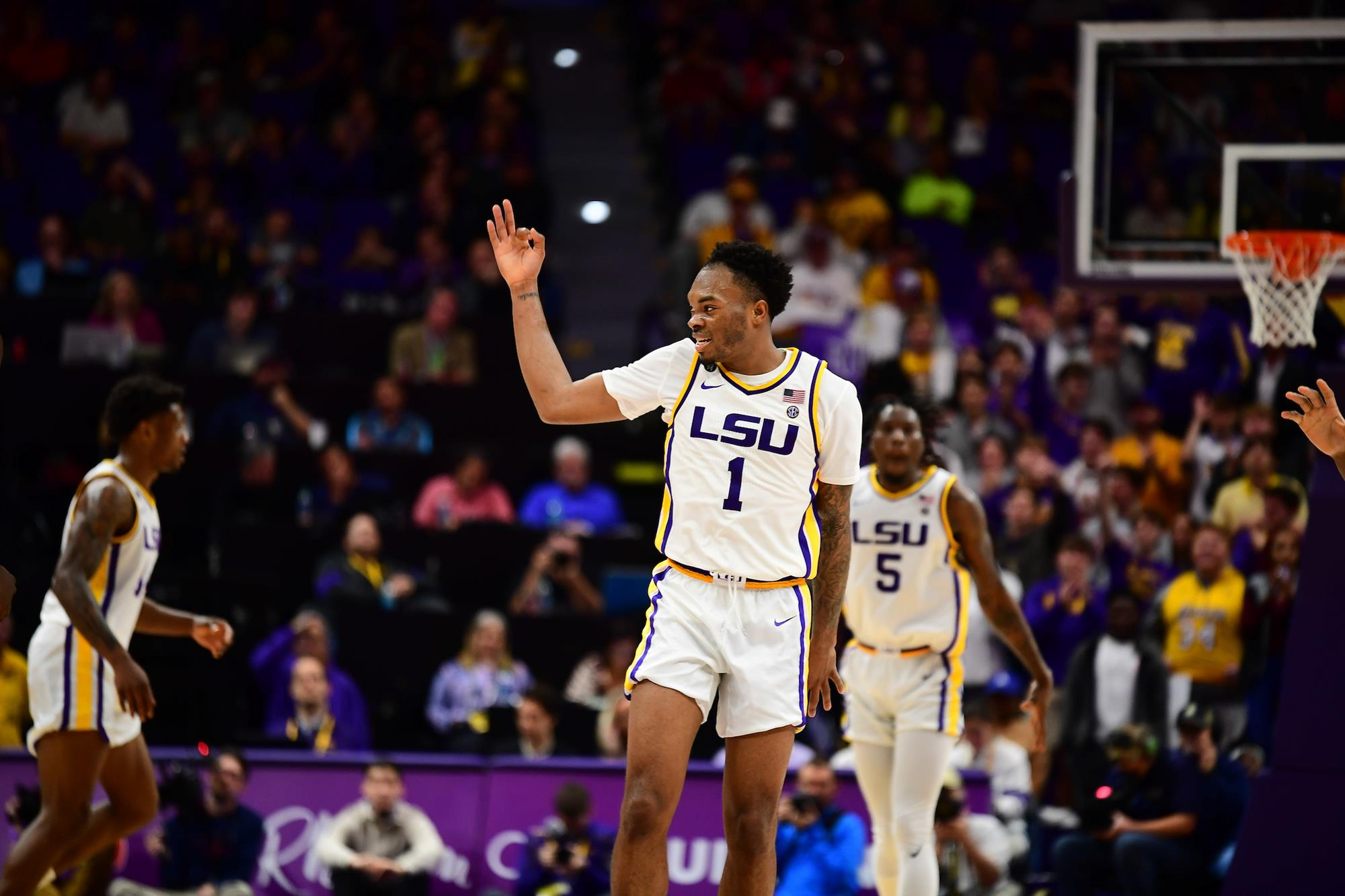 BATON ROUGE — The LSU Tigers, ranked No. 22 in the AP Poll, ran their record to 8-0 in the Southeastern Conference for the first time since 1981 with a 73-63 win over Ole Miss Saturday at the Pete Maravich Assembly Center.

LSU is now 17-4 overall and avoided the pitfall of a year ago when starting 7-0 before dropping a one-point decision to Arkansas at home in the second meetings of the two teams.

This time meeting Ole Miss a second time wasn’t an issue for LSU. The Rebels fell to 10-11 overall and 1-7 in the league.

The Tigers won on a day dedicated to the anniversary 50 years and one day ago on Jan. 31, 1970 when LSU legend Pistol Pete Maravich broke the NCAA career scoring record. Pete’s wife Jackie and son Jaeson were on hand to accept the accolades of a crowd of 11,112 as the court was surrounded by players and staff from the 1950s to recent years, including players from the Maravich era at LSU.

Three players were in double figures for LSU with Javonte Smart getting 21 points on 7-of-12 shooting and 7-of-9 at the free throw line. Both Trendon Watford and Marlon Taylor had 13 points each with Taylor getting 11 rebounds.

Devontae Shuler had a big game for Ole Miss with 28 points, while Khadim Sy had 11 points. Breein Tyree, who had 36 points in the first meeting between the Rebels and Tigers two weeks ago, was held to nine points by LSU.

LSU had a 13-point run in the first half and would lead by as much as 24 points in the opening stanza.

But there were a few queasy moments coming out of the intermission as Ole Miss caught fire and began making shots while LSU was missing its opening shots, most from inside the arc.

The Rebels scored the first 12 points of the second half and cut the LSU lead to single digits, at 40-32, with 16:47 on a Shuler three-pointer. The Tigers pushed the lead back to 13 but the Rebels didn’t go away at that point, cutting it to single digits at nine one more time, 47-38, with 13:28 to play.

LSU now goes on the road for two games this coming week facing Vanderbilt at 8 p.m. on Wednesday night at Memorial Gym in Nashville and plays at Auburn on Saturday at 11 a.m. at the Auburn Arena. Both games will be broadcast on the LSU Sports Radio Network. The Tigers next home game is Feb. 12 against Missouri.

Opening statement…
“I thought we played a great first half. I thought we came out with great energy, great enthusiasm. Second half, obviously, wasn’t as good. I thought the way we ended the first half hurt us. We let them go on a 4-0 run. We had some turnovers. In the second half we weren’t nearly as good, but I thought Javonte (Smart) made plays when we needed him to. I thought Marlon (Taylor) made some huge plays and some big plays as well. It was a good team win. At the end of the day we’re 8-0 in the league. I think it’s the first time in 40 years, something like that. It’s obviously not very easy to do and you’ve got to give credit to our guys. We have to play better. We’re going to have to play more consistently moving forward. We have a big week ahead, starting with Vanderbilt on the road.”

On the early second-half woes…
“We missed a few layups at the beginning. This was different. The Alabama game, we shot a bunch of threes to start the second half. This game we still shot a bunch of shots inside. We missed some shots inside. Our ball-screen coverage – we let them get a little more comfortable where they had some cleaner looks to start the second half. I think it was a combination of both, but give Mississippi credit. They could have folded and not played well in the second half, but they came out ready to play.”

On if this year’s team is similar to last year’s…
“We’ll see. We’ve got to keep our stride. You look at it – three of our four losses are by two points and we had the lead in the last minute of every single one of those two-point losses. We’ve obviously won a lot of close games too so all that stuff just evens out. It just so happened it evened out in conference for us instead of out of conference. We have a long way to go. If we want to have a special season, we’ve got to be more dominant on both sides of the ball. We’ve got to value each possession more. We’ve got to be cleaner with what we’re doing. We’re in a good spot, but there’s a lot of time left, there’s a lot of season left and we’ve got to continue to improve and continue to get better. I think time will tell, basically, how much everything mirrors each other.”

On the early start…
“We always get up early throughout the week and come in here and do skill work, so waking up early was not really a change for us. Coach (Will Wade) told us to go out there and have energy, so that was the biggest thing.”

On defending shots…
“It is a tough thing to finish through contact. Tyree (Breein) is a great player, so we just tried to make it tough for him and finish on the glass. You have me, Emmitt (Williams) and (Darius) Days down there, so it is hard to finish through us.”

On the early start…
“We prepared the right way. We live for games like this.”

On the energy playing offense and defense…
“Today was just my day. Each game is someone’s night.”

On scoring in the second half…
“We just stayed in attack mode. Coach just told us to stay in attack mode coming out of halftime.”

Ole Miss Head Coach Kermit Davis
Opening Statement…
“I love LSU’s team. I love their demeanor. I love their talent. They have seven really good players, and everybody knows their role. Will (Wade) has done a really good job with their team. They play at a really high level. There are probably 25-30 teams that can go to the Final Four and they’re probably one of them. I like the way they play. They got us in every facet early. I really didn’t want to go to halftime with my team, I would’ve liked to watch them celebrate Pistol (Pete Maravich) because he was my favorite guy. The last two times I watched him play I think he had 55 and 55. It was a great way to honor him with the 50 years. Our team is a work in progress. We’re disappointed but we’re not discouraged. Kind of a reset year and we’ll get it fixed. I really like what LSU is doing and they’ll win a lot of games down the stretch.”

How LSU made it hard for Breein Tyree…
“They just got on top of Breein (Tyree). His energy level has to stay high when he’s not making shots. The last time we played, he had 36 points in a game we led down the stretch. LSU was physical with him, did some timely switching, and when that happens you have to make other players better. I have to give LSU a lot of credit”

Adam Miller, seen here from earlier in the season, had 23 points with five treys to lead the Tigers.
LSU Men's Basketball vs. Akron - Radio Archive