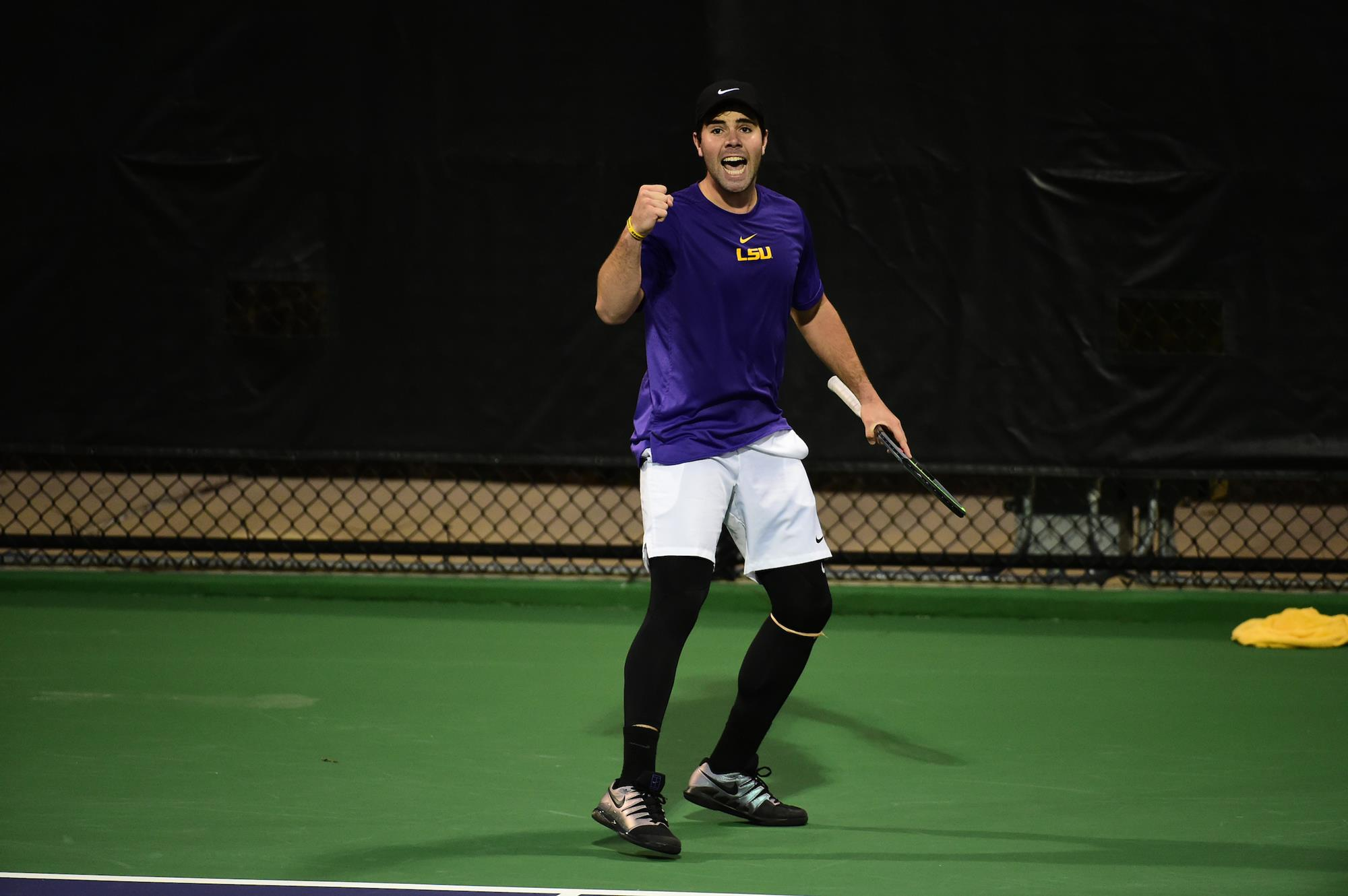 LSU started the day off on the right foot in doubles on a chilly Friday afternoon. On court three, sophomores Boris Kozlov and Nick Watson made quick work of Tulane’s Ewan Moore and Benji Jacobson, sweeping the match 6-0. Senior Rafael Wagner and freshman Ronald Hohmann never trailed on court two and clinched the doubles point, 6-4.

Singles was a different story for LSU. Tulane quickly tied the match up on court two when No. 90 Hamish Stewart defeated Hohmann 6-2, 6-1. Malik Bhatnagar took place on court one with a tough opponent in No. 32 Ewan Moore. Bhatnagar fell behind early in both sets and couldn’t dig himself out of the hole, falling 6-3, 6-4. Tulane took a commanding 3-1 lead after Tim Ruetzel defeated Nick Watson on court six, 6-4, 7-5.

LSU would’ve had to win out on the final three courts in order to take the match but came up short. Tulane clinched the match after Joey Thomas was defeated on court five. Thomas dominated the first set 6-1, but the Green Wave’s Akos Kotorman followed up with a 6-2 win in the second set. Kotorman took the momentum into the third set and took the match, 1-6, 6-2, 6-1. Despite LSU losing the match, they finished strong on the other courts and managed to make the score closer. No. 82 Boris Kozlov took on his first ranked opponent of the year, No. 47 Dane Esses, and won a three-set thriller. Kozlov lost the first set 4-6, but came for redemption in the second set, breezing through it 6-0. He kept that same energy in the third set, taking the match 4-6, 6-0, 6-4. Rafael Wagner ended the night with his third win on the year over Luis Erlenbusch 7-6, 1-6, 6-3, making the final score, 4-3, in favor of Tulane.

The Tigers fall to 5-2 on the young season. Their last two losses came from two squads with multiple ranked players, both by the score 4-3. Co-head coach Chris Brandi was upset with the loss but knows what the team is capable of.

“We left a lot on the table today but were still excited about this team because we haven’t played a good match yet. Both matches we lost were 4-3 to good teams. We still have a lot of tennis left. We don’t want to be playing our best in January, we want to play the best at the end of the year, and I think we will when it’s all said and done,” said Brandi.

The Tigers welcome the Tusla Golden Hurricanes and the Nicholls Colonels to the LSU Tennis Complex next Saturday, Feburary 9th, at 12:00 p.m. and 4:00 p.m.