Men’s Basketball Is BASF Team of the Month for January 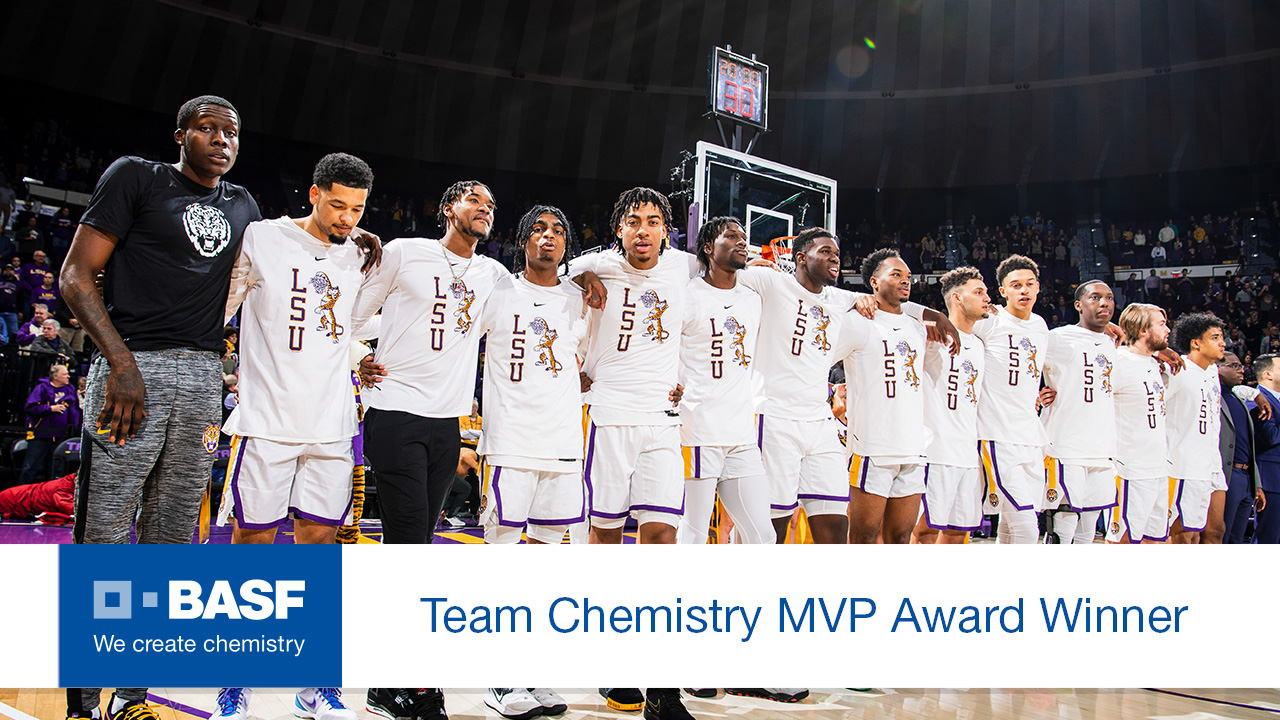 Baton Rouge, La. – The LSU men’s basketball team has been named the BASF Team of the Month for their scintillating performances in the month of January.

The Tigers rattled off an unblemished record of 8-0 in the month of January to start the new decade. Seven of those eight wins came against conference foes and the eighth one was a win against Texas as a part of the Big12/SEC Challenge. The Tigers sit atop the SEC standings after their 7-0 start to conference play, and it matches their 2019 SEC start which featured a 7-0 start in SEC play.

The month got started with a 78-64 win at Tennessee on January 4. The backcourt duo of Javonte Smart and Skylar Mays led the Tigers by combining for 38 points and eight assists. Smart had 21 points, while Mays chipped in with 17 on 6-of-10 shooting.

Trendon Watford’s old-fashioned three-point play in the waning seconds of LSU’s matchup against Arkansas on January 8 helped LSU prevail by a final tally of 79-77. Trailing by one with under 10 seconds to play, Watford took an inbounds pass towards the goal and his shot went in as he got fouled. The shot gave LSU the 78-77 lead and his free throw extended LSU’s lead to 79-77 for the win.

The Arkansas game wasn’t the last close call in the month of January, that’s for sure. After the Arkansas game, the Tigers played five straight games that were decided by four points or less. Skylar Mays’ heroics kept the Tigers undefeated in league play with an 18-foot jumper against Mississippi State on January 11 to give LSU a 60-59 win in the Pete Maravich Assembly Center. Watford inbounded the ball to Mays with 4.6 seconds remaining following the referees review of the clock and dribbled across half court before spinning and hitting the aforementioned game-winning jumper as time expired to send the PMAC into a frenzy.

Trailing by six on the road against Texas A&M on January 14 with under two minutes to play, the Tigers used three pointers by Marshall Graves and Javonte Smart to level things up and send the game to overtime. A Smart three pointer 15 seconds into the overtime session gave the Tigers the lead for good and they wound up winning 89-85. All five LSU starters were in double digits with Watford and Mays scoring 19, Smart with 18, Darius Days with 16, and Emmitt Williams had 10.

It was another come from behind win on January 18 against the Ole Miss Rebels on the road. The Tigers trailed by six points with under seven minutes only to prevail by a score of 80-76 as the game concluded. Smart led LSU with 20 points to go along with six rebounds. Williams had 17 points and seven boards, and Marlon Taylor had arguably his best game of the season with 13 points and six rebounds.

Six of the seven LSU players that played on January 21 against Florida at the PMAC scored in double figures to lead a balanced attack. Williams led with 19, while Mays (18 points), Watford (14 points), Smart (13 points), Days (10 points), and Taylor (10 points) all contributed heavily to the 84-82 triumph. A Florida layup with less than a second remaining tied the game and looked to be sending the game to overtime, but it was overturned after video review showed the ball still in his hands as the buzzer went off.

The Tigers dipped outside of conference play on January 25 to go on the road as part of the Big 12/SEC Challenge against Texas. LSU went in and came out with another gritty win, a 69-67 triumph over the Longhorns. Texas led the game by two with a little under five minutes to play, but LSU outscored the Longhorns 13-9 in the final minutes. Watford led the way with 22 points, six boards, and three assists, and his layup with 1:48 to play in the game gave LSU the lead for good at 62-60.

LSU closed out the month of January with a smooth win over Alabama at home on January 29. It was a 90-76 decision in favor of the Purple and Gold. Fifty of LSU’s points came in the paint and the Tigers hauled in 49 rebounds on the evening to assert their dominance. Emmitt Williams had his fifth double double of the season with 23 points and 11 boards. Mays was efficient scoring 18 points on 5-of-11 shooting to go along with in a 8-of-8 mark from the free throw line. Watford also checked in with a double double with 17 points and 15 rebounds; the freshman also had a few eye-opening assists.

The Tigers a currently on a nine-game winning streak and for the second time in as many years they capped off an unblemished month of January. LSU is back in action on Saturday morning (February 1) at the PMAC as they take on Ole Miss at 11 a.m. CT. At halftime of Saturday’s game against Ole Miss, all basketball alums on hand will be honored courtside with a special recognition to the family of Pistol Pete Maravich as LSU celebrates the Jan. 31, 1970 date when Marvich broke the NCAA career scoring record.