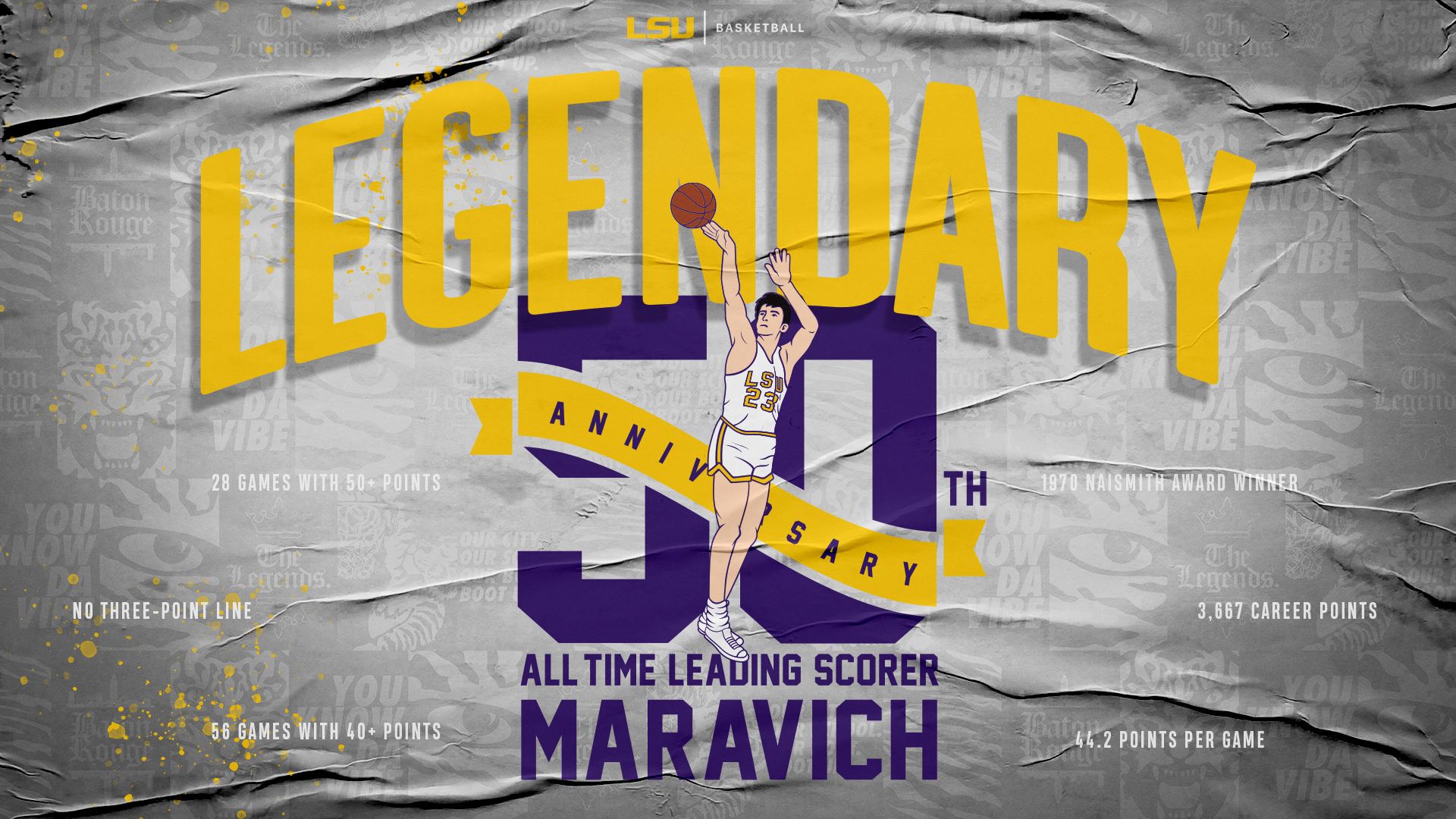 Editor’s Note: It is amazing to look back at the footage of one of college basketball’s most memorable events – the night Pete Maravich broke the Division I career scoring mark held by Oscar Robertson. The black and white film is grainy but luckily has been preserved through some tapes made about Maravich. The Cow Palace didn’t hold as many people as have claimed to be there that night.

One person who was there with a media credential is present LSU PA Announcer Dan Borne’. Dan was a reporter for WAFB and was also covering the game for CBS Sports Radio. Here is his first-person recollection written especially for this 50th anniversary of the record-breaking shot against Ole Miss. The anniversary will be marked with a presentation to the Maravich family at halftime of Saturday’s 11 a.m. game at the Maravich Center against Ole Miss.

Saturday night, January 31, 1970.  It was more than just a night.  It was a happening, a remarkable event in a remarkable year of college basketball.

What a season it was.  Niagara had Calvin Murphy.  Purdue had Rick Mount.  St. Bonaventure had Bob Lanier.  North Carolina had Charlie Scott.  Kentucky had Dan Issel.

It was a bumper crop.  But LSU had the cream of the crop.   The Tigers had a magician named Pete Maravich.

January 31, 1970, was a Saturday night in the John M. Parker Agricultural Center, where basketball games were held between rodeos and horse shows.

A Saturday night not in Death Valley, but in a Cow Palace, when Pete Maravich would set one of the most enduring records in all of sport.

He would not only surpass Oscar Robertson’s career scoring record, he would begin setting a record of his own that has lasted five decades.  It will probably never be broken.

Pete needed 40 points against Ole Miss that night to break The Big O’s record.  It was not a matter of if.  It was simply a matter of when.  And Old Miss coach Bob Jarvis knew it when he would say prior to the game, “There’s no way to stop him.  We’ll let him have his record and try to stop the rest of the team.”

The Cow Palace was packed as it had been for every game since Pete’s freshman season, when frosh could not play varsity basketball.  Fans would stream into the arena to watch Maravich and then leave before the varsity game.  Once Pete became a sophomore, an LSU basketball ticket was as rare as a Cajun who doesn’t eat crawfish.

But the best was to come when it became evident that college basketball’s most prominent record, Robertson’s career point total of 2,973, was in striking distance.

With the promise of a new record, media from around the country rimmed the court that was lain on the smelly dirt floor of the arena.  The place went wild when Pete tallied his 39th point.

Then it took six trips down the court for the Pistol to shoot the ultimate bull’s eye.  Why six trips?  Had anyone ever seen Pete come up empty on six straight possessions?  Was it the showman in the six-shooter who purposely primed the pump to tease the crowd?  He had enough pizzazz in him to do just that.

But with 4:41 left in the game he nailed it.  His favorite shot, a rimless jumper from some 18 feet out, swished through and put Pete in the record books forever.

He was raised high by his teammates.  Eleven thousand fans roared.  Media surged onto the floor for interviews and Pete, though it all, looked a little blasé about what had just happened. “How does it feel?” asked Bob Scearce of WAFB.  “Well, we’re in a game right now,” Pete said, pointing to the scoreboard.

Maravich later called that shot his greatest honor ever.

Pete would go on to NBA Hall of Fame; marry and have a family; become a devout Christian; and in 1988 die unexpectedly from a congenital heart problem at the age of 40.  He died where had lived to be: on a basketball court.

John Wooden called Pete the greatest ball handler ever.  No faint praise from the best college coach ever.

To this day nobody in big college basketball has ever done it better.  No one has scored more points than the lanky, floppy-socked Tiger guard.  But he did more than put on a show with his scoring, passing and dribbling.  He was the show.

And on certain fall and winter evenings, his magic turned a Cow Palace into a Shooting Gallery for The Pistol, Pistol Pete Maravich.