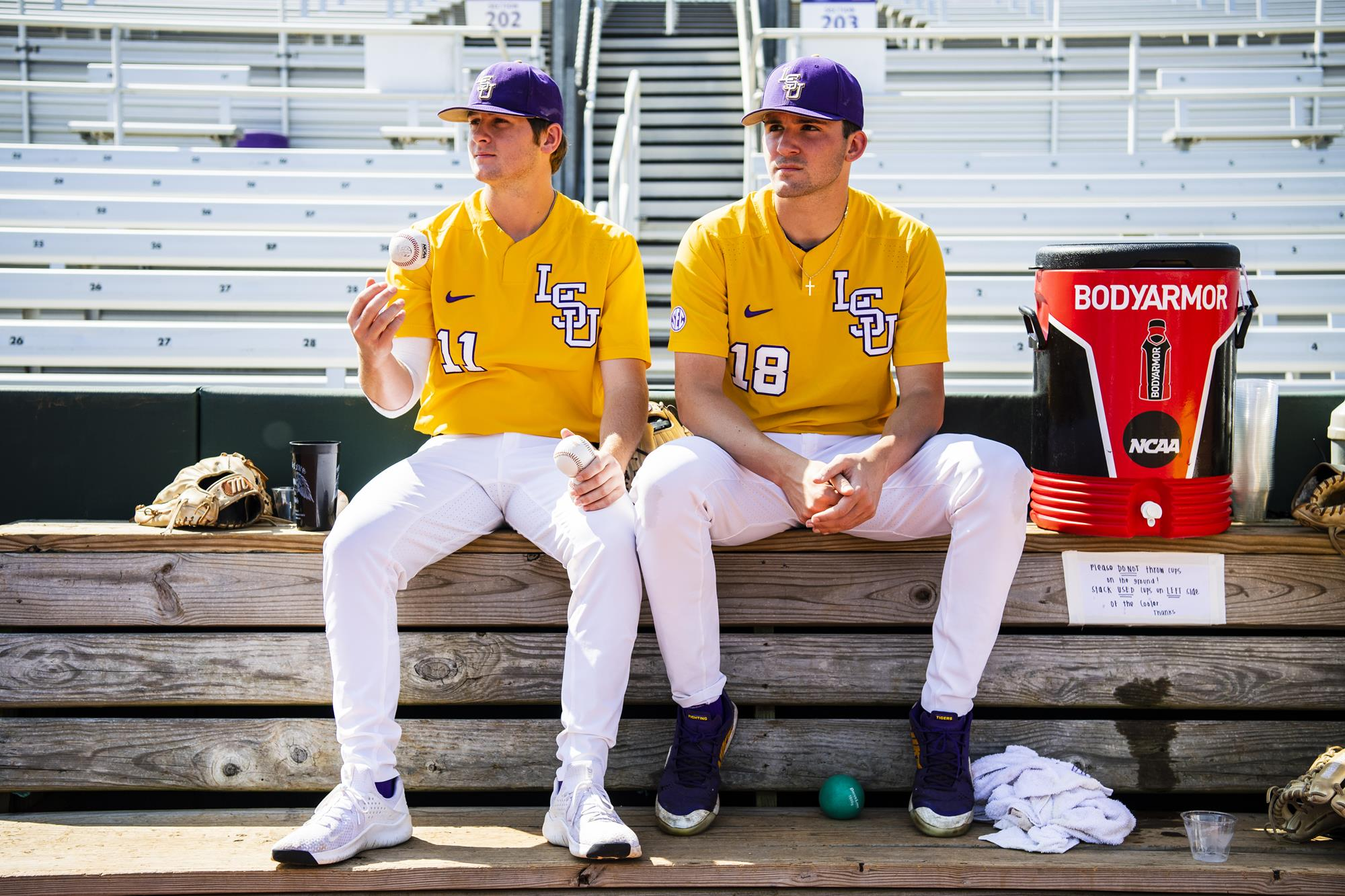 Alan Dunn smiled at the question. It’s one he’s waited a long time to be asked.

As far as depth and potential of this staff, it seems like you have so many arms to pick from. How excited are you about that?

“I’ve never been on a pitching staff where I go, ‘Man, I got too many arms,'” LSU’s pitching coach fired back.

The one he leads this year might cut it close, though.

Two injury-plagued campaigns to LSU’s arsenal of arms have taken a toll, but they’ve also taught lessons. Now armed with improved technology, increased numbers, and, yes, a couple of lefties, this year’s Tiger rotation could be among the best in Dunn’s tenure, and it could be enough to carry LSU back to Omaha, despite heavy turnover in the everyday lineup.

“While we’re trying to figure out the right combination and putting the pieces of the puzzle together in the lineup, I do think that our pitching staff is going to be at the level that it’s going to allow us to win games, even while we’re learning about our team, because of the quality of the pitchers themselves,” Mainieri said Friday. “I think we’re ready to get back to that position where we have an outstanding pitching staff like we did in Alan’s first six years here that think these last two years have been a little bit of an aberration.”

That aberration – 11th in the SEC in ERA in 2019 and 13th in 2018 – has been as much a result of bad luck and poor arm health as anything. Last season, Mainieri pointed out, LSU had its top three starters available to start in the same weekend just once. After Alex Lange and Jared Poche each exceeded 100 innings pitched in 2016 and 2017, only one Tiger pitcher – Zack Hess in 2018 – has even exceeded 90 innings, and none others have even reached 80.

To cure his team’s brachial ails, Mainieri has fitted his team with Motus Sleeves that track pitchers’ work load, arm stress, and a variety of related biomechanical data. Every morning, trainer Corey Couture sends a computer printout of the previous day’s readings, and from there each pitcher will have his throwing routine adjusting accordingly.

“We’re learning more and more about the importance of recovery for kids – just pure rest,” Mainieri said. “We’re giving them more days off of throwing than we ever have before. And I think that’s been a positive thing. All I can tell you is this fall, the velocities were up, there were no injuries, and the guys still pitched well. So I think we’re onto something, and we’ll see if it works in the spring.”

The knock-on effect of so many injuries in the last two years is that those now-healthy arms are proven quantities in the SEC.

It starts with ace Cole Henry, a freshman All-American in 2019 and LSU’s Friday night starter heading into his sophomore campaign. Henry was electric as a freshman, with a 4-2 record and a 3.39 ERA in 58.1 innings. He struck out 72, walked just 18, and allowed just 50 hits. Arm soreness cost him four weekend starts at the end of the regular season, and a nerve issue cut his Super Regional outing against Florida State short after just two innings.

Endurance and efficiency have been the focus of Henry’s offseason. He took the summer off to rest and get in peak physical shape.

“I didn’t make some starts I really wanted to make,” Henry said. “This offseason, I worked really hard to get my body in shape to hopefully last for the whole season.”

Meanwhile, he’s working to extend longer into games, too. That means wasting fewer pitches and putting hitters away earlier in counts. Instead of throwing 2-2 curveballs for hitters to chase or lay off, Henry wants to get quicker strikeouts or ground balls to save his arm.

“That’s been a big point that coach is trying to make me this fall and then going into spring, trying to throw 15 pitches or less each inning,” Henry said. “That’s going to be the biggest thing for me, just taking it pitch by pitch instead of just trying to strike everybody out.”

Behind Henry, the battle for the final two weekend spots could wage well into March. Landon Marceaux, AJ Labas, and Eric Walker are the three candidates. Marceaux overcame a rocky start to his LSU career, posting a 2.66 ERA in his final 37.2 innings of work as a freshman. This year, he’s in better shape, the product of a focused diet intent on getting him leaner and stronger for the long haul.

“Velocity’s picked up a little bit,” he said. “In the weight room, I’ve gotten stronger. Just becoming athletic, being flexible and loose.”

Marceaux may have lost weight, but he’s added a pitch. It’s something between a curveball and a slider, less 12-to-6 than his breaking ball was last year but a better compliment to his fastball and changeup.

“It gives the hitter more to think about,” Marceaux said.

The emergence of Labas this fall gave Mainieri more to think about, too. After posting a 3.48 ERA as a freshman All-American in 2018, Labas missed the 2019 season with a shoulder injury. He attacked his rehab and returned this fall on fire.

Paul Mainieri said AJ Labas was the “highlight of the fall.”

He’s battling to be one of LSU’s three weekend starters after missing the 2019 season with an injury.

“He probably outpitched everybody during the fall.” pic.twitter.com/CuHLT4xe8f

“The highlight of the fall was AJ Labas,” Mainieri said. “He threw better than anybody. He missed all of last year. He had pitched great for us as a freshman, had a back issue, so his velocity was 88-89. We knew there was more in there. This fall, he was 92-93, with great command [of] three pitches. Probably outpitched everybody during the fall.”

“I just saw the poise and the presence,” Dunn said of Labas, “how he carried himself. His stuff went up one or two clicks. He’s poised right now to be a huge part of our pitching staff.”

Walker, meanwhile, is the veteran of the staff, a fourth-year junior with 168 career innings pitched and a career .239 batting average allowed in 32 starts. Likewise, junior Ma’Khail Hilliard has thrown 120 career innings with 18 starts. Both have been, at times, ace-level starters for depleted Tiger staffs, and both give Dunn and Mainieri versatility as starters or long relievers.

On the back end, the Tigers can give the ball to Devin Fontenot and feel confident about his ability to get the final outs of the game. Last time out, Fontenot threw a game for the ages against Florida State in Game 2 of the Super Regional. The junior right-hander tossed 6.1 innings in relief, holding the Seminoles to one run on two hits while striking out 11 in an extra-inning epic for the ages.

Clearly, he can extend, but his plus-stuff and proven chops in late games – he also had seven saves last season – make him the favorite to start as LSU’s primary closer.

“The role doesn’t really matter,” Fontenot said. “I want to go out there and contribute to the team any way possible. Being the closer in the ninth inning would be a pretty good opportunity, but whatever I’m asked to do I’m going to do it.”

This summer, Fontenot stayed in Baton Rouge, taking classes and working out in preparation for his third year.

“I just wanted to stay here and prepare and get that mentality of even though the season ended, let’s just press pause, and then in February, we’ll press play again,” he said.

Add in senior Matt Beck – whose career ERA is 2.97 and whose career batting average against is a paltry .189 – and there’s a solid core out of the bullpen. Mainieri also added two lefties – freshman Jacob Hasty and junior Brandon Kaminer – to a bullpen short on southpaws a season ago.

The wildcards of the bullpen will be two talented, powerful right-handers in Jaden Hill and Nick Storz. Hill dazzled in two starts last year, with a 1.80 ERA as LSU’s Sunday starter to start the season, before missing the rest of the year with an injury. He threw a dominant inning in the fall, topping out at 97, and while Mainieri would like to utilize his talent as much as possible, he wants to ease Hill into the swing of things out of the bullpen as a sophomore.

“Jaden Hill is going to be the wild card of our staff,” Mainieri said. “He’s got the second best arm on our staff. It may be better than Cole Henry’s, to be honest with you. He’s got the most velocity, he throws strikes, has got tremendous change up and a good decent breaking ball. He’s a great competitor, super athlete.

“The temptation is to throw them right into the rotation and say, hey, that’s our second best guy, or maybe our best guy. But I think that the key is we’ve got to keep him healthy. And if it means taking baby steps along the way, even though you’re tempted to do more, I think we’ve got to be really smart and prudent and how we use him.”

That means pre-planned outings and strict pitch limits for Hill, who could work his way into the rotation if he stays healthy.

Storz, meanwhile, is a 6-foot-6 flame-thrower yet to make an impact at LSU while overcoming a number of surgeries. He’s thrown in two intrasquad games for the Tigers this spring, with just a little mild soreness after each outing.

It’s not too many arms for Dunn to utilize. It might be just enough to get the Tigers back to the top of the SEC, though.

“Last year we had a rough year with injuries and the growing pains of a young pitching staff,” Henry said. “I think this year we’re going to come back a lot better, a lot more experienced. I think it’s going to be a big year for the whole staff.”