LSU Goes To 7-0 In SEC; Ole Miss Next On Saturday At Home 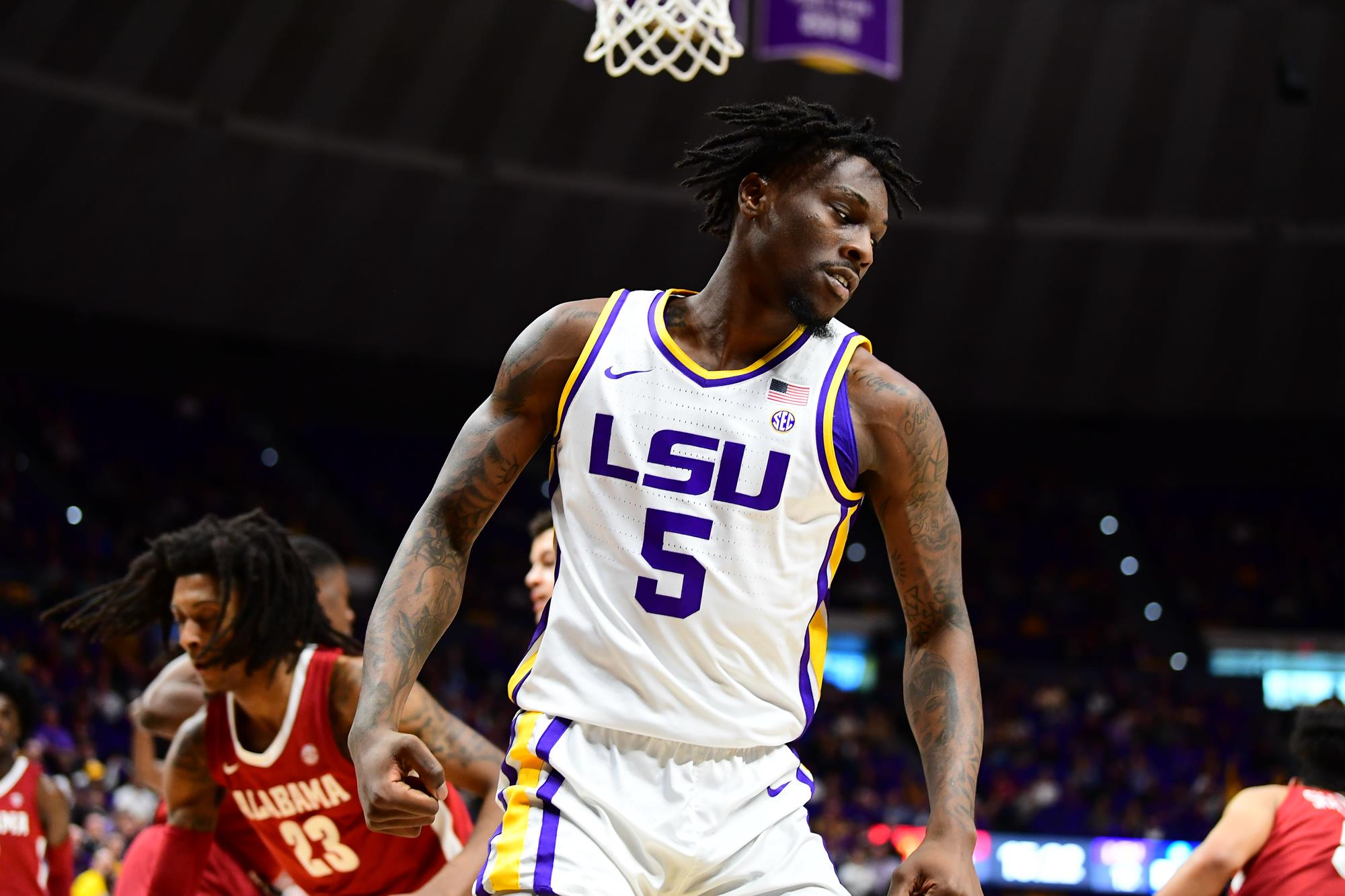 BATON ROUGE – The LSU Tigers placed five players in double figures had 50 points in the paint and just missed 50 rebounds in an impressive 90-76 win over Alabama to go 7-0 in the Southeastern Conference Wednesday night at the Pete Maravich Assembly Center.

The Tigers are now 16-4 overall and 7-0 in the SEC, the same mark the Tigers started the league last year. LSU has now won nine straight games and was perfect in the month of January for the second straight year.

The Tigers also had 50 in the first half, scoring 51 in taking a 51-33 halftime lead over time Crimson Tide. It marked the fifth half this season that LSU scored 50 points or better. It was the fifth time this season LSU scored at least 50 points in the paint and LSU finished one shy of 50 with 49 rebounds with a rebound margin on 18.

There was no second half lack of focus for the Tigers as Alabama climbed back to within nine points with 13 minutes to play giving the crowd of 10,871 a touch of concern, especially when Alabama had the ball with a chance to cut the lead further.

But an Alabama turnover created off a steal by Aundre Hyatt led to Skylar Mays layup to make it 64-53. Alabama turned it over again and Hyatt would score to make it 66-53 and then after an Alabama three-point miss, Marlon Taylor rebounded a Darius Days miss and scored to make it 68-53 with 11:53 to play.

The Tide would cut it to nine one more time at 70-61 with 9:21 to play, but Emmitt Williams got a paint jumper on LSU’s next possession and the lead would remain in double figures the rest of the way.

LSU had a 20-5 advantage in second chance points. LSU’s biggest lead was 20 points with 2:24 to go in the first half of play.

The Tigers are back in action at the Maravich Center on Saturday morning at 11 a.m. for a breakfast with the Tigers rematch with Ole Miss. At halftime of the game, all basketball alums on hand will be honored courtside with a special recognition to the family of Pistol Pete Maravich as LSU celebrates the Jan. 31, 1970 date when Maravich broke the NCAA career scoring record of Oscar Robertson set a decade earlier.

Tickets will be on sale during normal business hours at the LSU Athletic Ticket Office and online at LSUtix.net.

Opening statement…
“First off, I thought the students were great, the crowd was great – especially for a 6 o’clock tip. I thought it filled in and the students and crowd gave us a huge, huge lift. We played well. I thought it was one of our better games of the year. I don’t think the lead ever got below nine in the second half. Give Alabama credit in the second half. The first half they played bigger against us and were trying to keep us off the glass. We did a great job on the offensive glass in the first half and they just said, alright we’re going to scrap that and play smaller, play our better offensive lineup, spread them and drive them. We got enough stops and were able to keep a working margin most of the game. I thought our offense was efficient and well run. We had couple little sequences where we took too many threes. One in the first half, one in the second half where we just got trigger happy from three. That hurt us. (Darius) Days got us off to a great start. Trendon Watford did a great job on the glass and finishing around the rim. Emmitt (Williams) was an absolute monster. Javonte (Smart) and Skylar (Mays) did what they do. Marlon (Taylor) came in and got some big offensive rebounds, made some big free throws. I thought Aundre Hyatt played great. The tip dunk off the missed lay-in. The tip-in at the end of the first half was big. He had some big time, big time deflections. He got his hands on a ton of balls and got a lot of deflections. I’m very, very proud of how he played. He’s coming on and playing well for us.”

On Alabama cutting the lead to nine in the second half and how the team responded…
“I thought we did a much better job sticking to what we were doing, moving the ball side to side, getting the ball on the backboard. I think of our 13 turnovers, five of them were charges and one of them was a base line out of bounds (five-second violation) where we can at least set our defense. At least in those we’re not giving up a bunch of live-ball turnovers. We only had the one bad live-ball turnover against the press. They ran through one early in the game on a cross-court pass. I thought overall we played better and played well in the second half and played well to have a working margin.”

On Emmitt Williams being able to get going early on…
“It was huge. He made some huge plays at the beginning of the game. He did a good job of establishing us on the glass and making sure we stayed on the glass and got on the glass. He had some huge baskets for us in the second half. A lot of times in the first half he caught it on the roll or on the defense and things like that. In the second half he had a lot of back to the basket post moves that were huge baskets for us and huge buckets for us. He played really, really well. Our team certainly feeds off his energy. I think the crowd feeds off his energy. He’s got a magnetic personality and people enjoy being around him. He’s got a really good energy to him.”

On defeating Alabama…
“Before the game, Coach (Will) Wade came up to me and told me to just let the game come to me. That’s what I did. I didn’t try to press anything.”

On feeding off big plays in the game…
“I would say (big plays) definitely loosens it up for all of us. That is why we have the big lineup we have of me at the three and (Darius) Days at the four and Emmitt (Williams) at the five. We use that to our advantage and just try to crash the offensive glass and box out on the defensive end. I think that is definitely an advantage for us.”

On more intensity in practice…
“That is just how it is. We embrace it. It just makes us play harder. We definitely took some steps today as far as closing games. I think we did a good job of that today.”

On the mindset at halftime…
“We showed growth today. We still didn’t play our best half. I think (Alabama) might have won the second half, but that’s definitely different from what it has been in the past. We took steps forward and that is something to be proud of.”

On not allowing Alabama to come back…
“We stuck to the game plan. Especially, (Emmitt and Trendon) doing a great job on the offensive glass and getting us extra possessions to take time off the clock. We did a great job of not letting the scoreboard dictate how hard we were competing.”

LSU Forward Emmitt Williams
On feeding off big plays in the game…
“I just tell the team to shoot the ball and I try to get it off the glass. I love it. I just tell them to shoot it and I get the rebound.”
—
Alabama Head Coach Nate Oats

“Definitely not our best effort.  We’ve been playing a lot better than that.  We knew they were good.  We listened to some of Coach (Will) Wade’s comments leading into the game.  I think he kind of got on his guys so we knew we were going to get a pretty good effort.  Our effort didn’t match theirs in the first half.  Destroyed us on the boards.  That’s two games in a row now where we just can’t rebound the ball.  It just caused major problems.  I thought our effort was better in the second half but it just wasn’t enough.  When you give up that big of a lead, give up 51 points in the first half. You really dig yourself a hole against a team like this that plays as hard as they do.  That many points I the first half is going to be too hard to overcome.  I thought our guys showed some fight in the second half.  We did a lot better but I think we cut it to nine twice.  We only had nine turnovers.  So now the first time you cut it to nine we turn the ball over, they score, turn it over immediately on the inbounds play and then they score again and it goes right up to 13.  Just couldn’t get over the hump so a lot of credit to them.  They’re a hard-playing team.  There’s a reason they’re first place in the SEC.”

On the decision to bring in John (Petty) …

“We just have to get our leaders practicing better.  Try to make a statement with that and it obviously backfired.  He’s one of our best players; we needed him there to play a lot of minutes.  He still played 33 minutes.  We haven’t been practicing enough in my opinion.  We’ve won four in a row but our best basketball was played against Auburn.  I thought we’ve been playing worse since that Auburn game.  We’ve played some teams that we are capable of beating but with the level we are playing we have to get back to practicing a lot better and coming out playing a lot harder than we’re playing right now.”