Women’s Hoops Plays 2nd We Back Pat Game At No. 23 Tennessee 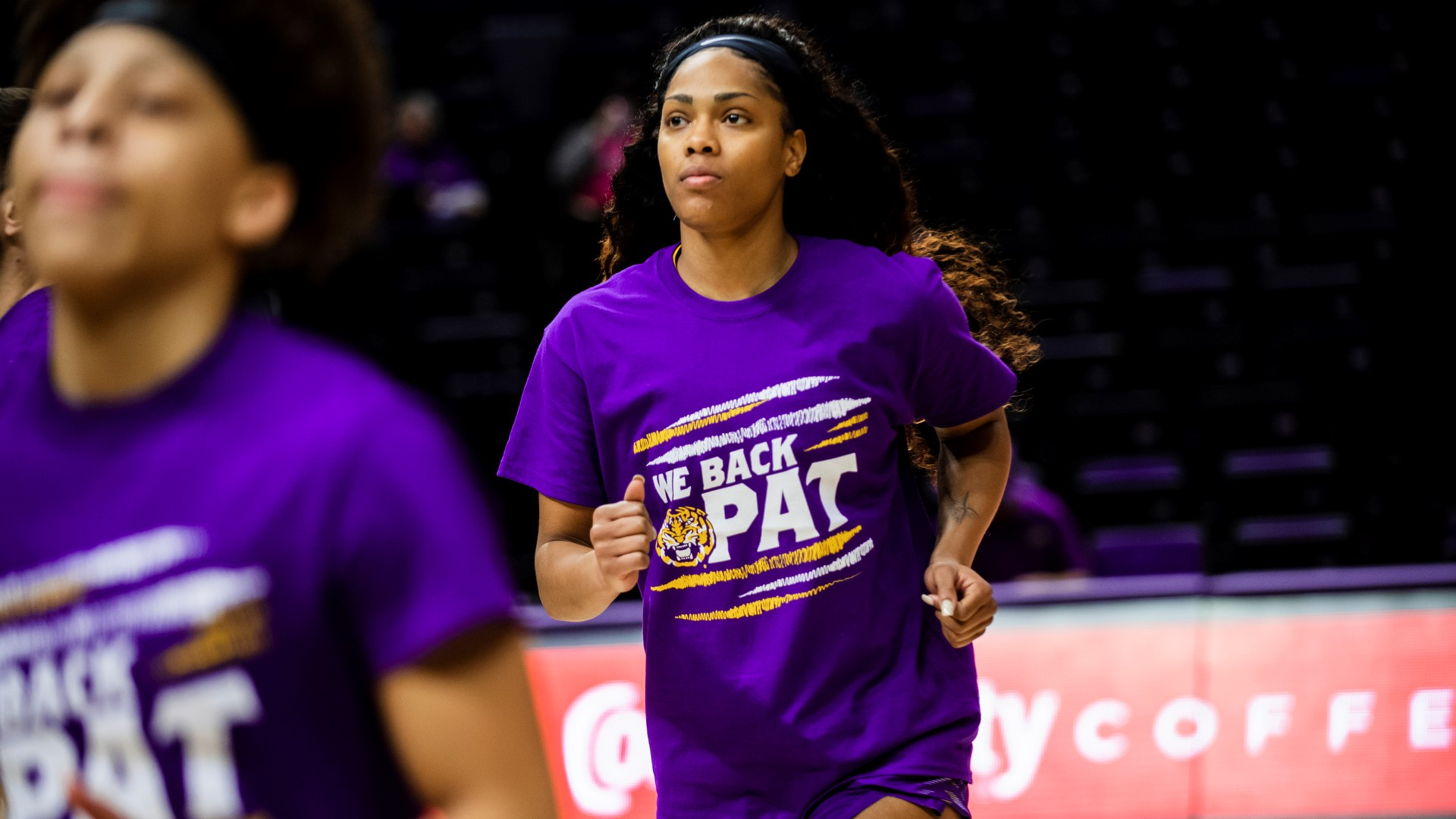 BATON ROUGE – LSU will wrap up the ninth annual SEC “We Back Pat Week” on Sunday, January 26, as the women’s basketball team travels to No. 23 Tennessee for a Noon CT at Thompson-Boling Arena. We Back Pat Week is a week-long initiative focused on bringing awareness and recognition to the Pat Summitt Foundation and its fight against Alzheimer’s disease.

SEC women’s basketball teams will support The Pat Summitt Foundation during their home games from January 19-26. The mission of the Foundation is to award grants to non-profit organizations that advance research for treatment and a cure, provide care and support for patients and caregivers, and educate the public about Alzheimer’s disease. For more about the Pat Summitt Foundation and its mission, go to http://www.patsummitt.org/.

The game will be broadcast on the SEC Network and is available on the ESPN app with Courtney Lyle and Carolyn Peck calling the action. Fans can also listen to Patrick Wright call the game on the LSU Sports Radio Network. Wright is in his 30th season as the “Voice of the Lady Tigers” and is joined on home broadcasts by Jeff Palermo. Fans can listen on 107.3 FM and audio broadcasts are available online at LSUSports.net/live. Live stats will be available at LSUsports.net.

Mitchell continues to be strong shooting from the field. Her overall percentage ranks first in the nation at 72.2 percent. The NCAA single season field goal percentage record is 72.4 percent by Myndee Kay Larsen of Southern Utah in 1997-98.

Mitchell made a quick trip home this week to be inducted into the Salem High School Athletic Hall of Fame Class of 2020 on Friday night. Last Friday, Mitchell was named a Top 30 candidate for the 2019-20 Senior CLASS Award, the only player in the SEC on the list.

Mitchell is on track to become only the fourth LSU player to reach the 1,000 points-1,000 rebounds career marks – currently at 1,247 points and 887 rebounds. She has 35 double-doubles over her career and is currently 22nd on the LSU all-time scoring list. She is averaging 14.4 points and 9.1 rebounds per game.

Pointer leads the squad from the point with 14.6 points and 4.7 assists per game. She also has the best free throw shooting percentage on the squad at 72.2 and the most steals with 44.

Aifuwa is having a solid season in the paint for LSU. Aifuwa is third on the team with 9.8 points per game. She is sporting a 50.6 field goal percentage to go along with 7.5 rebounds per game and 26 blocked shots.

LSU continues its solid play on defense, having held opponents to 50 points or under five times and 13 opponents at 60 or under so far this season and winning the battle of the boards in 15 games played. The Tigers are 12th in the nation in free throw attempts with 411 and 32nd in the nation in field goal percentage at 44.8 percent.

Bench play continues to be a strength as the season has progressed. The LSU bench has outscored opponents 347-258 over the first 18 games of the season.

The Opponent – No. 23 Tennessee

Tennessee is currently tied for second place in the SEC. Three players are averaging double figures led by junior Rennia Davis. Davis is averaging 17.3 points per game followed by freshman Jordan Horston at 10.7. Sophomore Rae Burrell is averaging 10.2 points per game coming off the bench. Davis also leads the defense with 8.3 rebounds per game, while Horston leads the squad with 94 assists and 28 steals.

Head coach Kellie Harper is in her first season at Tennessee, her fourth head coaching stop – Western Carolina (2004-09), North Carolina State (2009-13) and Missouri State (2013-19). The former Kellie Jolly played for four seasons at Tennessee (1995-99), crossing paths with LSU head coach Nikki Fargas in 1998-99 when she was a graduate assistant with the Lady Vols.

LSU will close out January on the road at Florida on Thursday, January 30.  Game time is set for 5 p.m. CT on the SEC Network Plus.

The Tigers return to the PMAC for a three-game homestand to start the month of February with Texas A&M on the 2nd, Missouri on the 10th and Tennessee on the 13th. Fans can purchase tickets for all games at LSUtix.net.