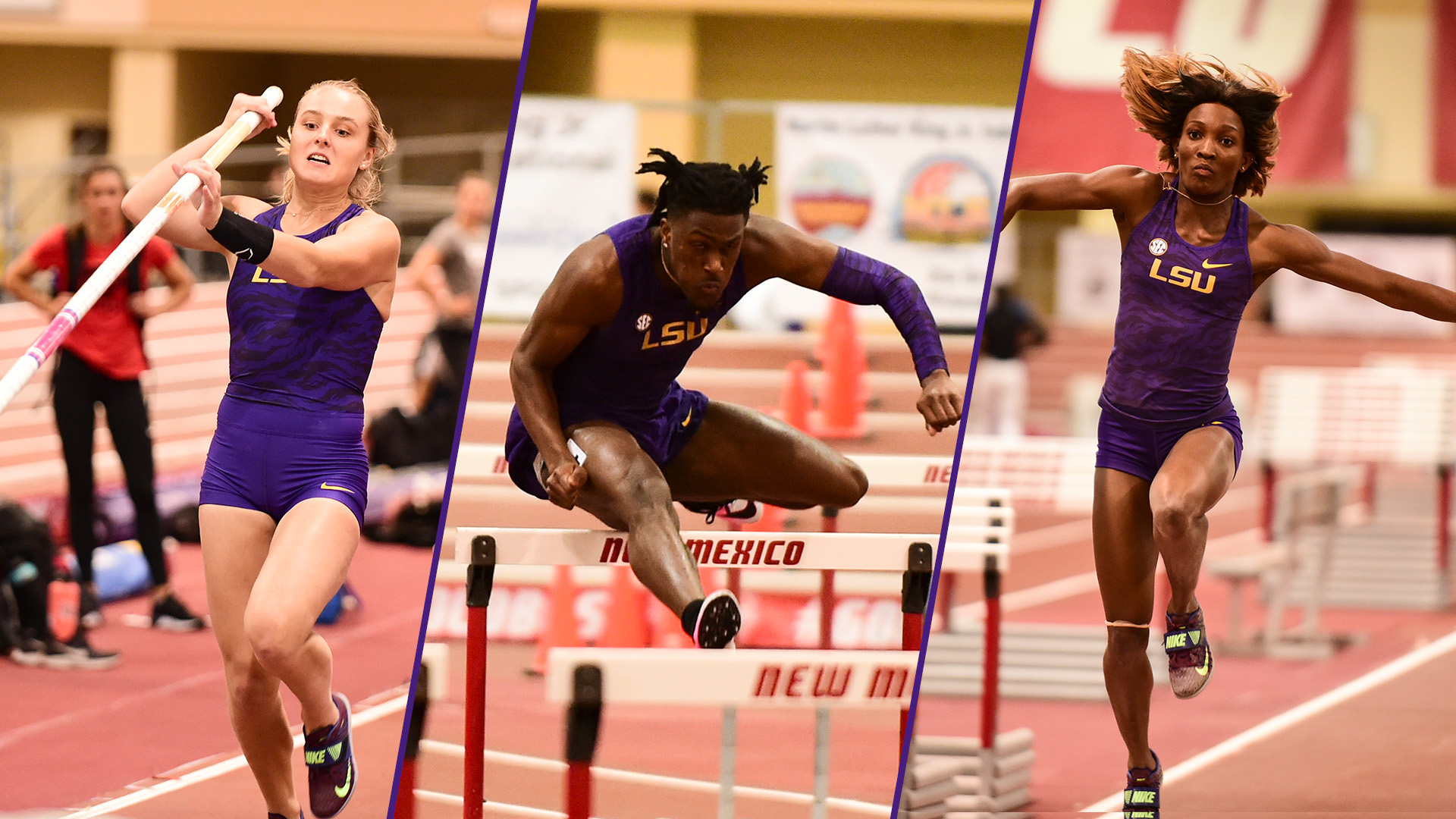 Thomas led the charge for the Tigers in the 60 meter hurdles as he ran a time of 7.70 to win the event; it’s his second win in a row. Thomas narrowly edged out teammate Eric Edwards Jr., who took second with a time of 7.72 seconds. Arthur Price advanced to the finals and ran a season best of 7.90 to take fifth place.

It was a personal best for senior Mercy Abire in the triple jump that earned her the top collegiate spot in the event; she placed second overall behind former LSU triple jumper Lynnika Pitts. Abire used a triple bound of 42′ 8″ (13.00 meters) to set a new personal best and rank 10th nationally. Pitts won with a mark of 43′ 6.50″.

In the women’s pole vault, Gunnarsson went over 14′ 3.25″ (4.35 meters) en route to taking the top collegiate spot. Anicka Newell, a professional, won the event with a mark of 14′ 5.25″. Gunnarsson has yet to be beat by a collegian in 2020 finishing all three of her events as the top collegian.

The LSU women advanced Tonea Marshall and Symone Mason into the finals of the 60 meter dash. Mason took sixth with a time of 7.32 and Marshall placed seventh with a readout of 7.34. Marshall clocked a personal best of 7.32 in the preliminary round. Former LSU sprinter Mikiah Brisco actually won the event with a world leading 7.08 for the 2020 season.

Amber Hart registered a personal best for the third straight meet in the shot put to move herself into the LSU top 10 list. Hart launched the shot 47′ 1.75″ (14.37 meters) to finish in fourth place and move into a tie for 10th place on the all-time LSU list with Jacqui Sheffield (1984).

Kiya Oviosun ran a personal best of 54.30 in the women’s 400 meter dash to take fifth place in that event that featured 20 runners. Dylan Peebles was LSU’s on male sprinter to make the finals of the 60 meter dash and he finished in fourth place with a time of 6.74. Alia Armstrong (8.21/sixth place) and Brittley Humphrey (8.35/seventh place) were LSU’s finalists in the women’s 60 meter hurdles. Armstrong ran a personal best of 8.19 in the preliminary round; the time of 8.19 converts to 8.21 for NCAA qualifying purposes and that ranks No. 8 in the NCAA.

LSU will travel to the Razorback Invitational (January 31-February 1) in Fayetteville, Ark.