Tigers Take Down the Hokies in Tuscaloosa 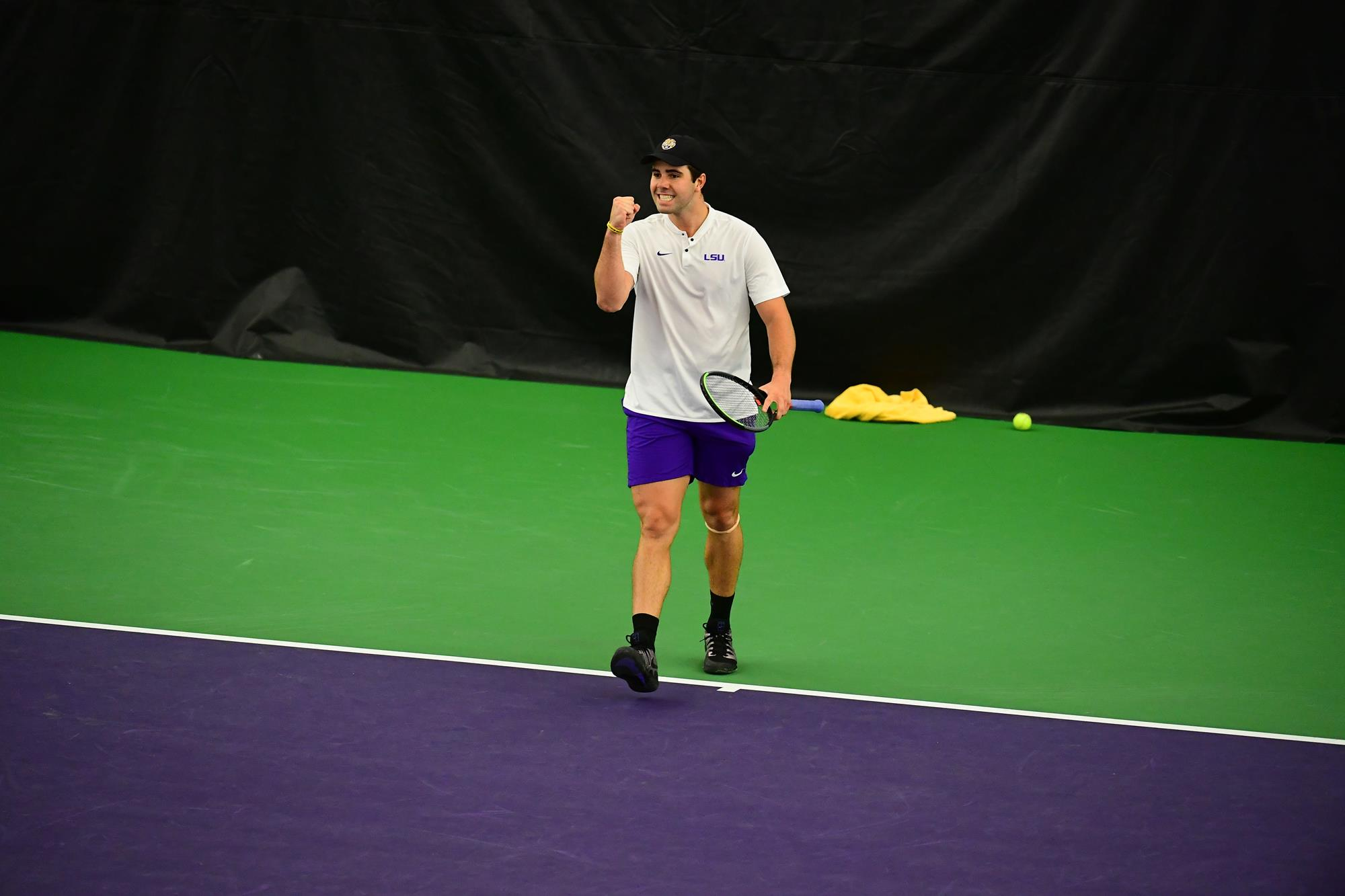 Tuscaloosa, Ala.—The LSU men’s tennis team stayed undefeated with a victory over Virginia Tech on Friday at the Roberta Alison Indoor Facility in Tuscaloosa, Ala.

The doubles point was a fight, foreshadowing for the rest of the day.

Sophomore Daniel Moreno and junior Joey Thomas took place on court one, facing Virginia Tech’s Henrick Korsgaard and Alex Ribeiro. The ITA Southern Regional Champions fell behind early and couldn’t overcome the deficit as they were defeated 6-3. LSU needed to win the next two matches to claim the doubles point and did just that.

The duo of senior Rafael Wagner and freshman Ronald Hohmann improved to 3-0 on the year with a victory over Brandon Perez and Ryan Kros. Wagner and Hohmann got off to a 2-0 lead and didn’t look back as they won the match 6-4. Sophomores Boris Kozlov and Nick Watson came out on top in a back-and-forth match over Hokies Mitch Harper and Carlo Donato. The match was deadlocked at 5-5 until the Hokie duo took the lead 6-5, but Kozlov and Watson tied it back up at 6-6, pushing it to a tiebreak. LSU turned it up, taking the match 7-6(4) and the doubles point.

Singles didn’t let back in terms of competition with the match coming down to Rafael Wagner’s third set on court four.

Ronald Hohmann suffered his first loss in an LSU uniform on court two after being taken down by Mitch Harper 6-2, 6-3. Joey Thomas put the Tigers back on top with his first singles win of the year on court six. Thomas went up 1-0 and never trailed for the remainder, taking down Matthis Ross 6-4, 6-2. On court one, Malik Bhatnagar was defeated by Henrick Korsgaard 6-4, 7-6(4). Bhatnagar had the opportunity to push the match to a third set where he led 6-5 but dropped the next set and the tiebreak. LSU fell behind to Virginia Tech after Nick Watson was defeated on court five. Watson dominated the first set, winning 6-1 and had the opportunity to put the match away in the second set. Watson had Carlo Donato at match point but couldn’t put it away, pushing it to a tiebreak. Watson dropped the break and the third set, leaving LSU to trail 3-2.

No. 85 Boris Kozlov, as well as senior Rafael Wagner were put in must-win situations in order for the Tigers to take the point and they did just that. Kozlov was pushed to three sets but was victorious over Alex Ribeiro 6-4, 2-6, 6-3. Senior Rafael Wagner clinched the win in a marathon match over Brandon Perez. Wagner took the first set 7-6, including a tie break where no one could pull ahead. Wagner did enough to get the set 13-11 but dropped the second one 3-6. Both squads had all eyes on court four’s final set where Wagner put Perez away and the Tigers took the match 7-6(11), 3-6, 6-2.