Tigers Stay Undefeated with Wins Over UIW and VCU 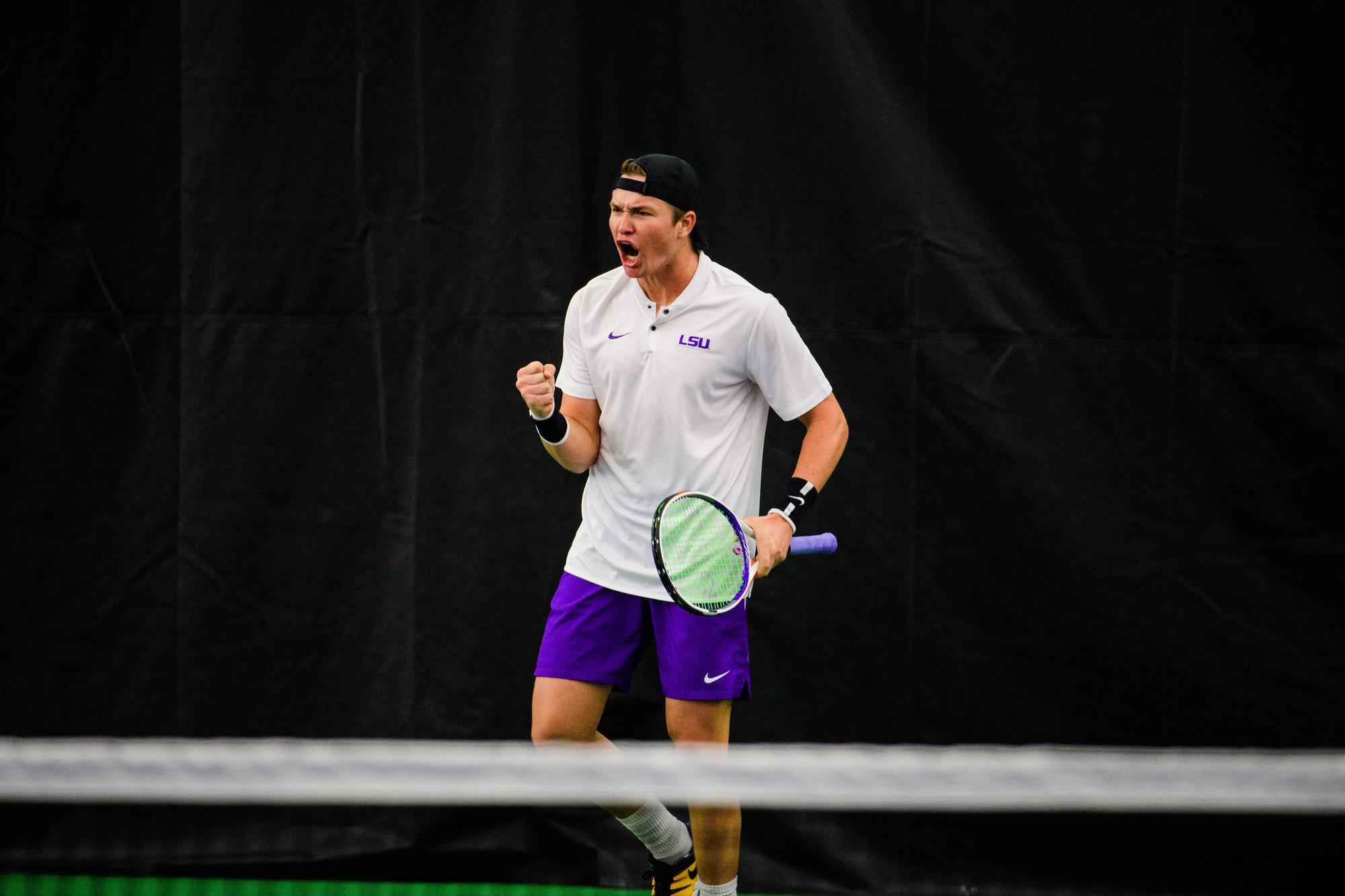 BATON ROUGE, La.- The LSU men’s tennis team continued their dominance to start the dual season at the LSU Tennis Complex this Sunday, where they claimed a pair of hard-fought wins against Incarnate Word and VCU, pushing their record to 4-0. Since the beginning of the Brandi-Era in 2017, LSU has started the season 4-0 each year.

The Tigers first dual match began early Sunday morning against the Cardinals, seeing the Tigers clinch the doubles point with wins on court one and court two

Senior Rafael Wagner and freshman Ronald Hohmann started the day off with a win over UIW’s Marco Galic and Omar El Kadi in a back-and-forth match, putting their record to a perfect 3-0. The ITA Southern Regional champions, sophomore Daniel Moreno and junior Joey Thomas, picked up where they left the Fall off by clinching the doubles point with a 7-6 victory over Dennis Boisseau and Marwin Kralemann 7-6.

Singles picked up after the doubles point, where the Tigers made quick work of the Cardinals. The participating teams decided not to play out matches when wins were clinched, meaning three singles matches went unfinished.

Daniel Moreno picked up the first point for LSU as well as his first dual win of the season by overpowering his opponent Luka Stojanovic 6-2, 6-1 on court five. Malik Bhatnagar stayed undefeated on the dual season and brought in the next win on court one over Dennis Boisseau 6-0, 6-3 and soon after, Ronald Hohmann also stayed undefeated after taking down Oliver Valentinsson 6-1, 6-2 on court two to sweep the Cardinals 4-0.

Following the LSU win, they rested while New Orleans and VCU kicked off their match. VCU swept UNO 4-0, leaving the Rams to have a date with the Tigers in the finals.

LSU and VCU had a two-hour break before first serve kicked off in the afternoon. The Rams pushed the Tigers to their limit in singles, but alas, LSU prevailed.

The Tigers doubles lineup saw one change where sophomore Nick Watson took place on court three with Boris Kozlov. That didn’t slow down LSU one bit where the duo took down Charles Bertimon and Tomas Balazi 6-3. The dynamic duo of Joey Thomas and Daniel Moreno followed suit, defeating Lleyton Cronje and David Cierny 6-4. Thomas and Moreno push their record to 13-1, taking Fall play into account.

Singles followed soon after LSU clinched the doubles point, where every match outside of Malik Bhatnagar’s was down to the wire. Bhatnagar continued to dominate court one after defeating Lleyton Cronje 6-3, 6-3, taking his record to 4-0 on the year.

Co-head coach Chris Brandi had nothing but positive things to say about Bhatnagar’s resurgence this year, saying, “Malik had a tough fall because of injuries, but has been putting in work for moments like today. We have the utmost confidence in him.”

After Bhatnagar finished up, the rest of the matches all went into a third set. Ronald Hohmann took the first set from Charles Bertimon on court two 6-3. The second set wasn’t kind to Hohmann after a plethora of unforced errors caused him to drop the set 3-6. At the start of the third set, Hohmann returned back to the dominate force he has been this season, taking the set and the match 6-3, 3-6, 6-2.

LSU’s other standout freshman, Tomas Descarrega, had a come from behind victory against Rayane Stable to secure the victory. The Argentina native lost the first set 4-6 but returned the score back to Stable in the second set, taking it 6-4. Descarrega turned it up a notch in the third set and after smashing a return, secured the Tigers’ second victory of the day, winning 4-6, 6-4, 6-3.

Chris Brandi understood the importance of the freshman standouts, speaking highly of their hard work thus far. “First and foremost, Tomy (Descarrega) and Ronnie (Hohmann) are great teammates. They’re working hard every day and it’s great to see them enjoy a match like this, where they were under pressure and came through for the team.” said Brandi.

LSU was pushed today, and Chris Brandi knew that would be the case coming into today.

“Today was tough, but we knew it would be. Incarnate Word played a great match, especially in doubles. VCU has a very talented team and came to our house with confidence. Early in the year anything can happen, and our team competed the way we need to,” Brandi said.

The Tigers will head to Tuscaloosa, Alabama next Friday to take on Virginia Tech at 1:00 p.m.