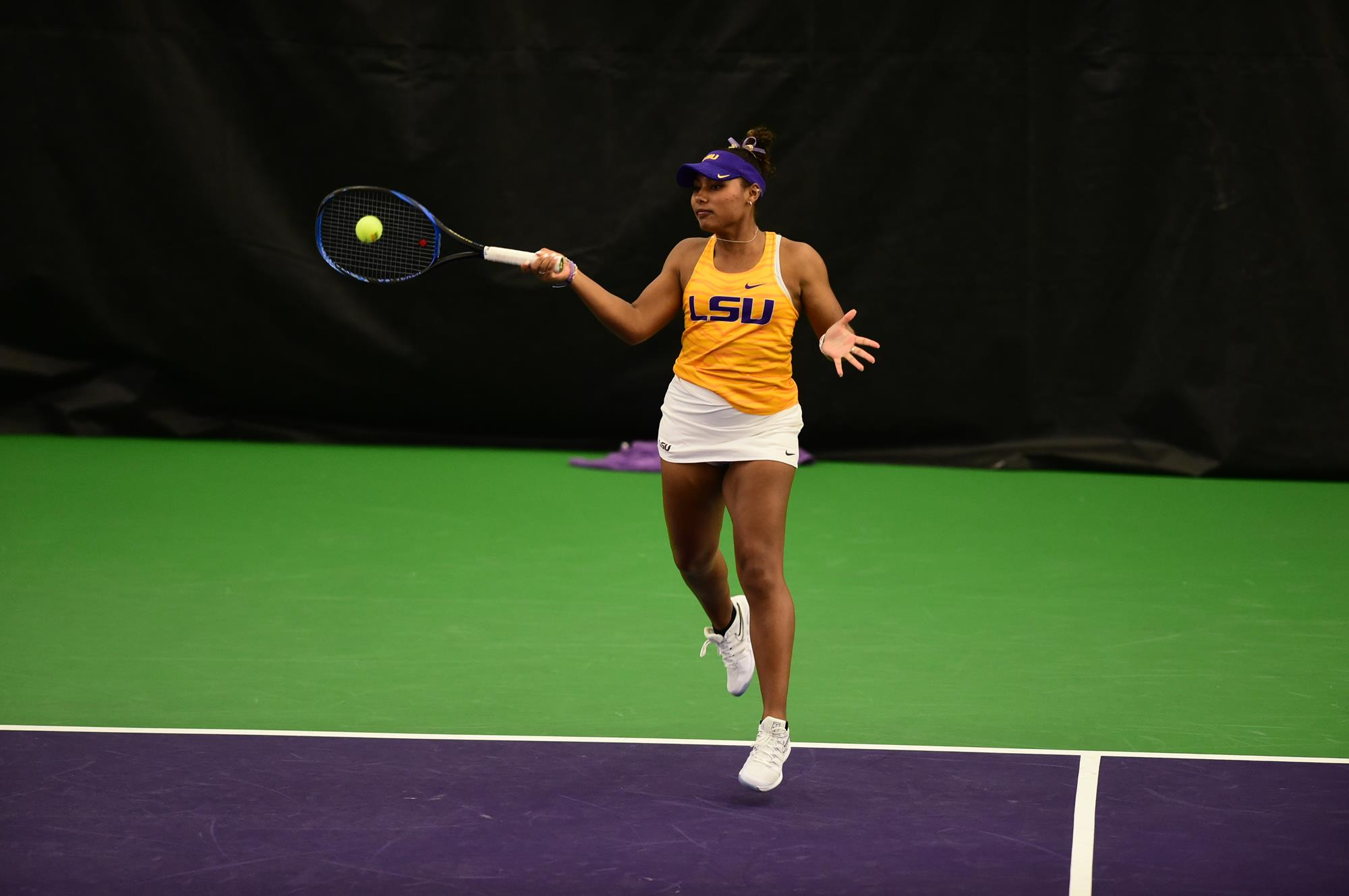 “From start to finish today was probably better than any of our starts to the season before,” co-head coach Julia Sell said. “We had a few pickups inbetween, but they came back and closed it out. They did a good job maintain their intensity and effort levels. This is where we want to be at this point.”

Junior Taylor Bridges and sophomore Anna Loughlan teamed together to take on Olivia Alfredsson and Judit Castillo at the No. 3 doubles. The Tigers were confident, sweeping the Demons 6-0 to win their first match as a doubles team.

Senior Paris Corley and freshman Safiya Carrington also paired together for the first time as they took on Mariella Minetti and Potrycja Polanska at the No. 2 doubles. The Tigers dominated the match 6-1 to clinch the doubles point for LSU.

The final doubles match of the round took place at the No. 1 doubles as junior Eden Richardson and freshman Nina Geissler take on Ela Iwaniuk and Emilija Dancetovic. The teams contested a back and forth contest, with the Tigers pulling ahead at the end to narrowly win 7-5 and give the Tigers a sweep in doubles.

No. 105-ranked Corley faced Polanska at the No. 3 singles. Corley played a near flawless first set, only dropping one game in a 6-1 win. The second set saw Corley sweep 6-0 and get the Tigers’ first singles win of the dual season.

At the No. 6 singles, Loughlan took on Dancetovic. Loughlan took an early lead in the first set and coasted to a 6-1 win. The second set was nearly identical, with Loughlan not losing form on her way to another 6-1 win to extend LSU’s lead to 3-0.

The No. 1 singles spot had No. 42-ranked Bridges face Minetti. Bridges’ show her strength in the first set and swept Minetti 6-0. The second set had Minetti win two of the first three games before Bridges won the next five to win the set 6-2 and get the fourth and clinching point for LSU.

No. 61-ranked Carrington played her first singles match in the dual season at the No. 2 singles against Iwaniuk. Carrington dominated the first set and coasted to a 6-1 win. The second set saw Iwaniuk grab an early lead and jump to a 4-1 lead in the set before Carrington won the next five games to complete the straight set win and earn LSU’s fifth point of the afternoon.

Geissler made her singles debut in the dual season against Castillo at the No. 5. Geissler took an early lead and coasted a first set win by a score of 6-2. The second set was the same story and scoreline, with Geissler winning 6-2 and earning her first win of the dual season.

The final singles match took place at the No. 4, where Richardson faced Alfredsson. Richardson swept the first set 6-0 before Alfredsson struck back to take the second 6-3 and force the decisive ten-point tiebreaker. Richardson’s strong start boosted her to a 10-5 win to complete the Tiger’s sweep of the Demons.

Richardson and Geissler teamed together again at the No. 1 doubles to take on Tanaka Chakanyuka and Nandi Munyulwa. The Tigers dominated on their way to a 6-0 sweep of the Jaguar duo.

Carrington and Corley faced Agyte Mintah and Shaeda Nickle at the No. 2 doubles. The LSU duo was ruthless, playing a near perfect set to a 6-0 sweep and clinching the doubles point for the Tigers.

The final doubles match took place at the No. 3, where Loughlan and Bridges were matched against Stephanie Mbaya and Anya King. The Tiger duo’s strong performance was enough to earn a 6-0 win and complete the full sweep in doubles.

Junior Luba Vasilyuk made her dual season debut at the No. 6 singles, where she took on King. Vasilyuk made quick work of the first set, winning 6-0. The second set saw Vasilyuk complete the sweep and win 6-0 to earn her first singles win of the dual season.

No. 42 Bridges was next up as she took on Mbaya at the No. 2 singles. Bridges dominated the first set 6-0 and was able to repeat in the second set to complete the sweep and extends the Tiger lead to 3-0.

No. 105-ranked Corley took on Mintah at the No. 4 singles. Corley took an early match lead and coasted to a 6-2 first set victory. Corley swept the second set to get LSU’s fourth and clinching point.

Richardson faced Munyulwa at the No. 3 singles. Richardson’s dominant display saw her sweep both sets 6-0 and get her second win of the day.

At the No. 5 singles, Geissler took on Nickle. Geissler’s quick start powered her to a 6-1 first set win. The second set was a similar story, with Geissler coasting to a 6-2 win.

The final match of the day saw No. 61 Carrington take on Chakanyuka at the No. 1 singles. Carrington put on a dominating display and defeated her opponent in straight sets, 6-1, 6-2.

The Tigers travel to Austin, Texas to participate in the 2020 ITA Kick-Off Weekend beginning with a match against Texas Tech at 2 p.m. CT on Friday, January 24.