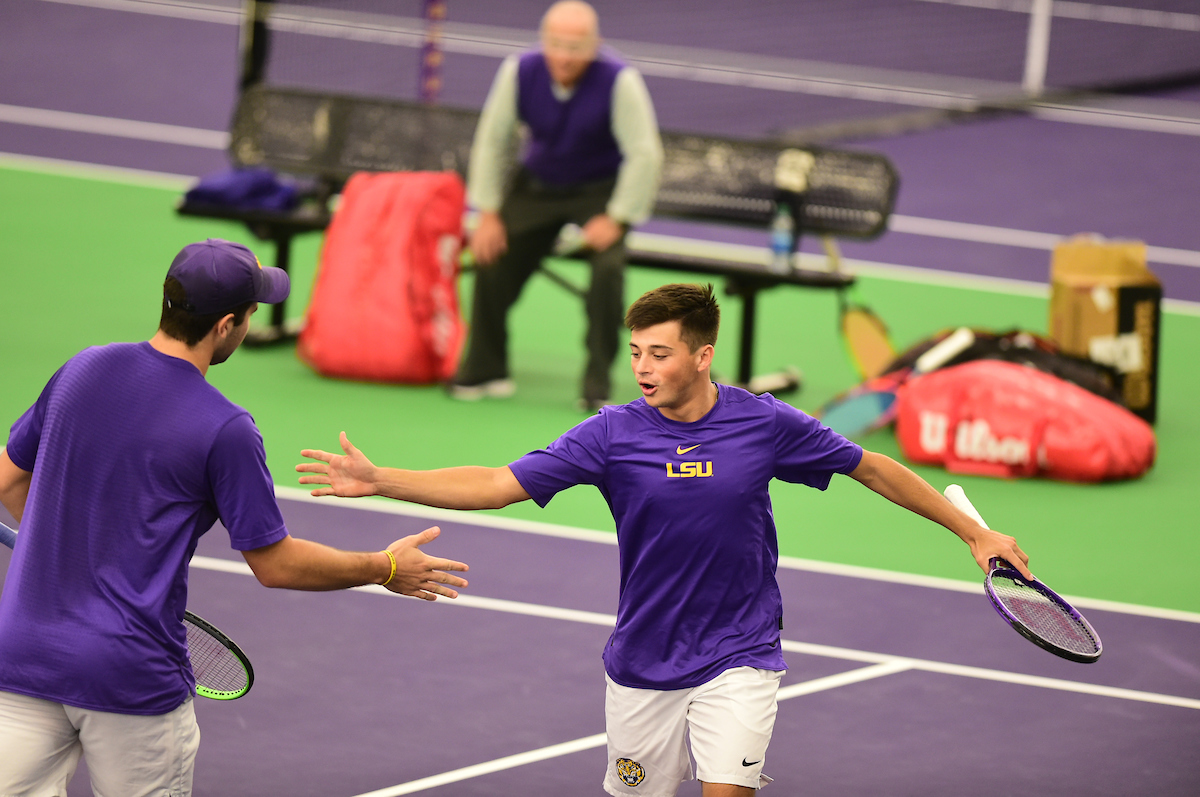 Baton Rouge, La. – The LSU men’s tennis team got off on the right foot for the 2020 dual spring season, claiming a pair of wins over the Alcorn State Bravehawks, 7-0 and 4-0, at the LSU Tennis Complex on Sunday. The wins give the Tigers a 2-0 record to start the season, as head coaches Andy Brandi and Chris Brandi continue to go undefeated in season openers since arriving at LSU.

The Tigers’ first match of the day began with freshman Ronald Hohmann making his dual debut, paired up with senior Rafael Wagner on court one, and sophomores Boris Kozlov and Nick Watson pairing up on court two. Both LSU duos made quick work of their opponents. Hohmann and Wagner gave LSU their first victory of the new decade with a 6-1 win over Gjorgji Popovski and Stojan Stojonovski. Shortly after, Kozlov and Watson wrapped up their match, as well as the doubles point, with a 6-2 win over Lucas Dini and Santiago Rocca.

Sophomore and All-SEC Freshman Nick Watson picked up where he left off last season with a 6-0, 6-0 win over Kareem Bowe.

Junior Malik Bhatnagar took his spot on court two and won in straight sets over Stojan Stojanovski 6-2, 6-4. Senior Rafael Wagner had a three-set match with Alcorn State’s Lucas Dini, but prevailed in the tiebreak 6-4, 6-7, 1-0 (9).

The players took an hour intermission prior to the second leg of the doubleheader.

Although LSU threw out a different lineup, they picked up where they left off last match. In doubles, Malik Bhatnagar and Boris Kozlov paired up on court one, while Tomas Descarrega and Nick Watson took place next to them on court two.

Both duos, once again, handled their opposition quickly. Bhatnagar and Kozlov defeated Alcorn State’s Popovski and Stojanovski 6-1, while Descarrega and Watson followed form with a 6-2 victory.

For singles, the lineup saw some change with senior Ruy Teixeira taking court five, and Boris Kozlov going to court three. The squads decided not to play out once a team clinched, leaving only two matches with finished results.

Malik Bhatnagar continued his successful day with perfect 6-0, 6-0 victory on court one. Tomas Descarrega also received his second career win in an LSU uniform with a 6-0, 6-2 victory over Kareem Bowe. Those two matches were enough for LSU to clinch and the rest of the matches with unfinished, though it’s worth noting no LSU players were trailing.

Co-head coach Chris Brandi had nothing but positive things to say about the team’s performance today, noting how impressive the freshman were. “It was the first dual match for our freshmen, which is always tough to get through the nerves, but they did a great job. We have a talented group, but we know we still have a lot to work on moving forward.”

He also gave Alcorn State their credit for “Being well-coached and competing hard. They pushed us to start the season.”