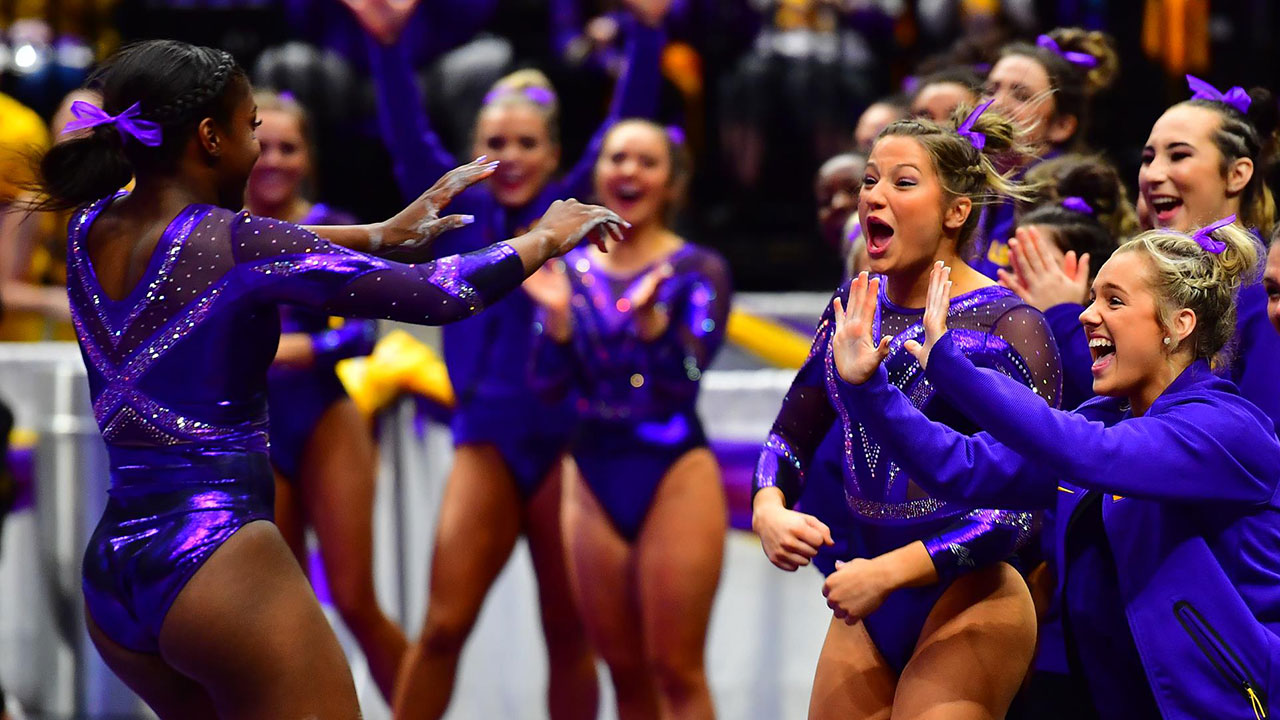 ATHENS, Ga – In its first top-ten matchup of the season and in front of a sellout crowd, the second-ranked LSU gymnastics team defeated the eighth-ranked Georgia Gymdogs, 196.725-196.150, Friday night in Stegeman Coliseum.

Freshman Kiya Johnson claimed the all-around title with a career-high score of 39.525. The win marked her first all-around victory of the year.

“We were in Georgia’s Arena, against a very good Georgia team tonight,” co-head coach D-D Breaux said. “We came from behind and beat a team like Georgia on balance beam, I would say that this team earned some ribbons tonight.”

Freshman Kiya Johnson led off for the Tigers with a 9.80. After an explosive routine, junior Sammi Durante in the third spot scored a 9.85 for the victory. After the Tigers counted a fall, Senior Kennedi Edney, scored a 9.775. Freshman Kai Rivers also earned a 9.75 in the second spot. Senior Ruby Harrold anchored on bars with a 9.725.

Johnson earned the second vault title of her career with a 9.925 on her double-twisting Yurchenko. Rivers led off for the Tigers 9.875. In her first appearance as an LSU Tiger, freshman Maddie Rau scored a 9.775. Harrold and Edney, and junior Sarah Edwards all earned scores of 9.875 in the third, fourth, and sixth spots in the lineup for the Tigers.

Harrold took her leadoff spot on floor with a 9.70. Junior Reagan Campbell scored a 9.750 in the fourth spot. Edney had a strong routine and scored a 9.80. In her first career anchor performance, Johnson ended the rotation with a 9.925.

Rivers scores a 9.95 in her first collegiate performance on beam. Durante scored a 9.850 in the third position. Johnson scores a 9.875 in the fifth position.  Campbell matched her career-high of the season with a 9.975 on the beam. Edney ended her all-around competition and the meet with a 9.925 on beam.

LSU will return to the Maravich Center to take on Auburn at 7:15 p.m. on Friday, January 17. Tickets to all LSU home meets are available at www.LSUtix.net.