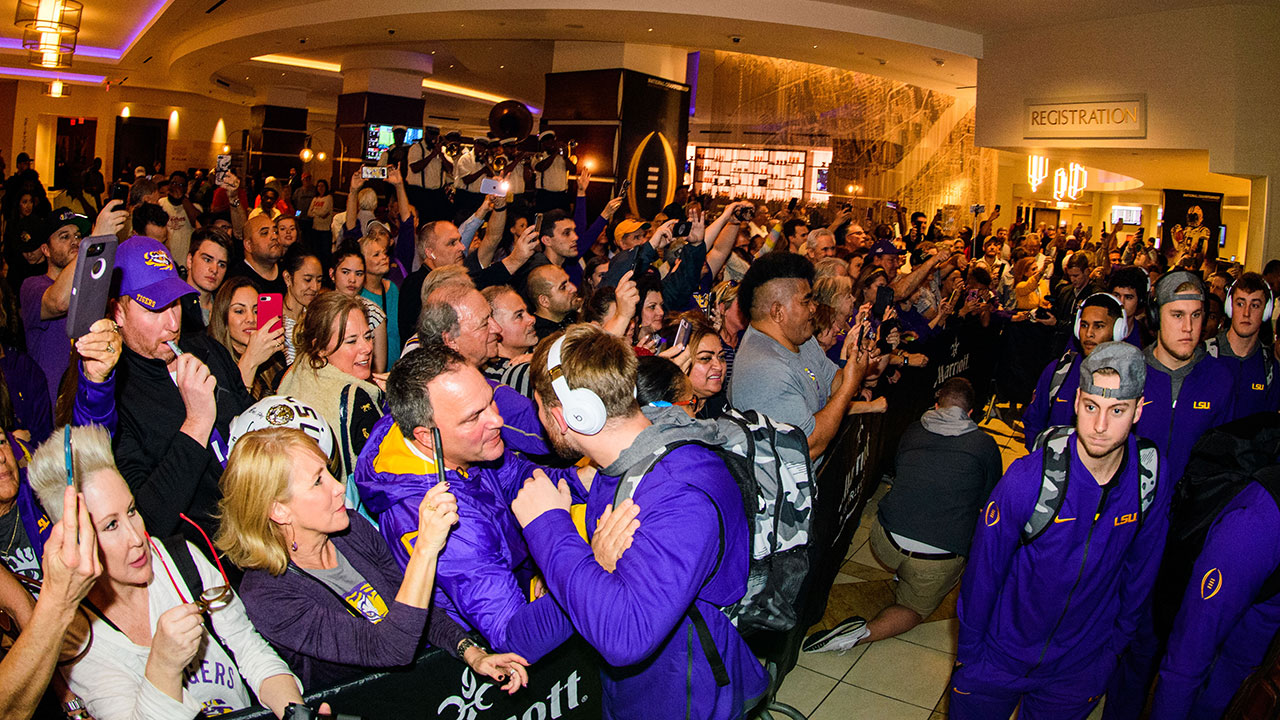 NEW ORLEANS – A brass band and a lobby with hundreds of Tiger fans welcomed LSU here Friday afternoon as the top-ranked and 14-0 Tigers arrived at the New Orleans Marriott shortly before 6 p.m. after making the 60-minute drive from Baton Rouge.

LSU will go after the school’s fourth national title in football on Monday when the Tigers face third-ranked and 14-0 Clemson in the College Football Playoff National Championship Game in the Mercedes-Benz Superdome Kickoff is scheduled for 7:15 on ESPN.

LSU is looking to join last year’s Clemson team as the only programs in FBS history to go 15-0.

Prior to departing Baton Rouge on Friday, the Tigers held a typical Wednesday practice on the LSU campus. LSU will practice on Saturday afternoon at the New Orleans Saints Practice Facility in Metairie.

LSU’s seven-bus caravan departed campus just after 4 p.m. on Friday and was cheered along the route to New Orleans by hundreds of fans.

“We’ve had great focus and great leadership,” LSU coach Ed Orgeron said of his teams’ preparation up to this point. “(It’s) one day at a time; we’re going through the process. These guys are confident, they are relaxed.

Orgeron said the Tigers will use their time in New Orleans leading up to Monday’s game, “staying focused, stay working on football and fundamentals. We still have a lot of work to do. This is a great football team we are playing. We are going to prepare all the way until game time.”

After a team dinner on Friday night, the Tigers went bowling. LSU will go to a movie as a team on Saturday night.

Prior to practice on Saturday, LSU will take part in CFP Media Day where the Tigers will meet with 1,000 members of the media that have been credentialed for the championship game. Media Day will be held at the Convocation Center on the campus of Xavier University. CFP Media Day is also open to the public and free of charge for fans to attend.

The Tigers will wrap up their on-field preparations for Clemson on Sunday after with a walk-through at the Saints Practice Facility.