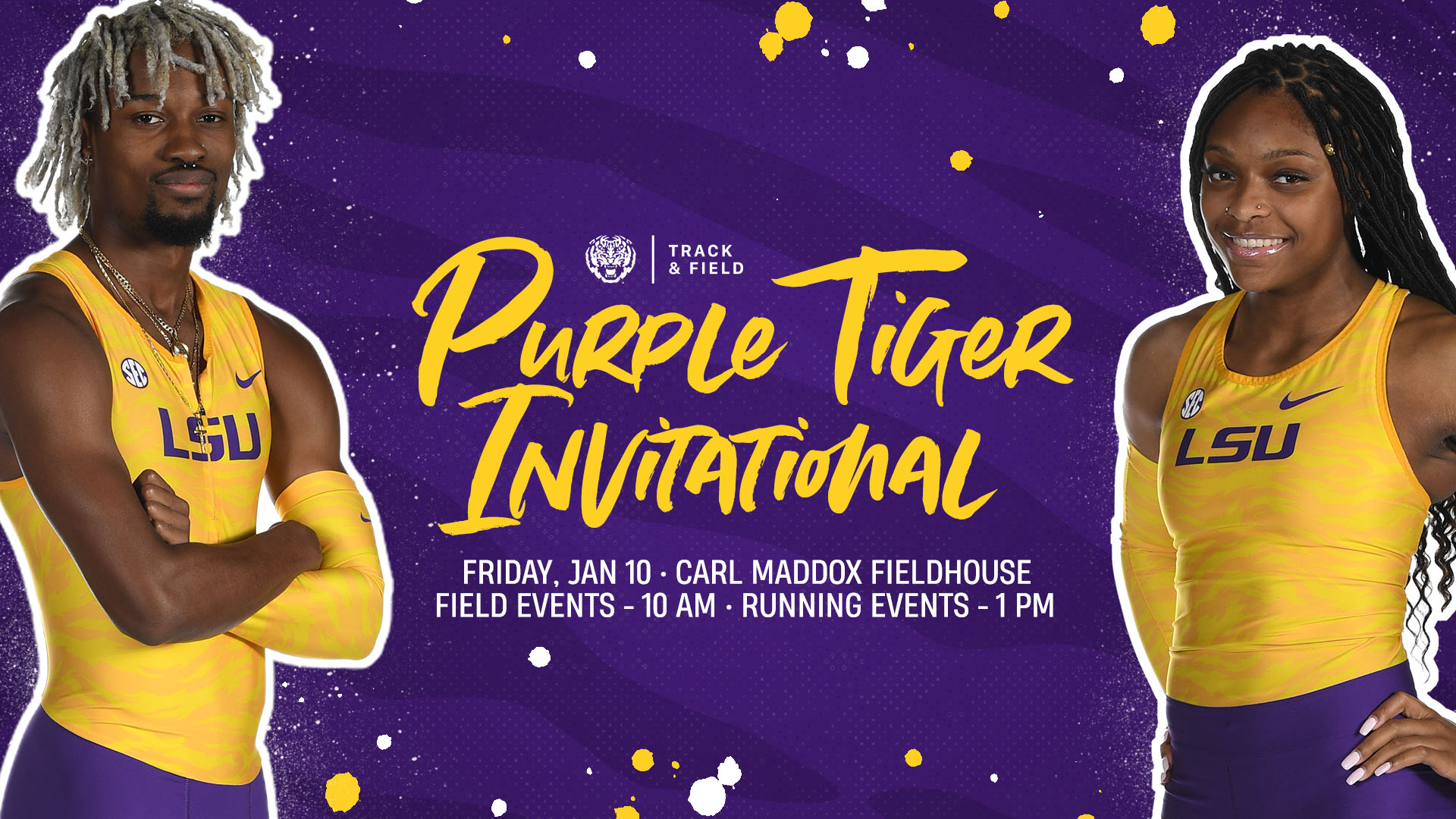 Baton Rouge, La. – The LSU track and field program will host the Purple Tiger Invitational on Friday at Carl Maddox Fieldhouse to officially get the 2020 season underway. Admission is free to the public.

The Tigers are under the direction of head coach Dennis Shaver, who enters his 16th season as the head man for one of the most respected track and field programs in the country. Shaver led the LSU men to an SEC outdoor title in 2019, and both the men’s (indoors) and women’s (outdoors) squads earned podium finishes at the NCAA Championships a year ago.

The meet is scheduled to begin at 10 a.m. with the men’s weight throw and will run until 6 p.m. with the final race of the day, the men’s 4×400 meter relay. LSU will have 48 athletes lined up to compete in a number of events on Friday. Jake Norris will kick things off for the Tigers in the weight throw at 10 a.m.

Rayvon Grey and JuVaughn Harrison will open up their 2020 campaigns in the long jump that begins at 2:30 p.m. Grey (indoor) and Harrison (outdoor) swept NCAA long jump national titles during the 2019 season becoming the first duo from the same school to accomplish that feat since 1972.

The men’s squad has two returning scorers from the 2019 NCAA indoor meet – Rayvon Grey and JuVaughn Harrison. Grey scored 10 points in the long jump for the Tigers by winning the national title, and Harrison added seven points to the Tigers’ team total with a tie for silver in the high jump. On the women’s side, junior Abby O’Donoghue is the only returning scorer from NCAAs. She placed sixth in the high jump with a clearance of 5′ 11.25″ to register three points for the Purple and Gold. Interestingly enough, all three of the aforementioned Tigers won SEC titles indoors last year and will look to do the same in 2020.

The NCAA Championships will take place March 13-14 in Albuquerque, N.M., at the Albuquerque Convention Center.

The 2019 preseason U.S. Track & Field and Cross Country Coaches Association rankings came out on Wednesday afternoon. The LSU men begin the season ranked No. 2 in the land, while the women’s squad checked in at No. 16. The rankings will next be updated on Jan. 27.

JuVaughn Harrison was one of 10 men named to The Bowerman preseason watch list on Tuesday afternoon. Harrison enters his junior season for LSU as a two-time national champion, two-time SEC champion and three-time All-American after his first two seasons of competition in Baton Rouge. The long and lanky, multi-talented jumper became the first man in NCAA history to sweep the high jump and long jump national titles in NCAA history last June.

Two posters will be given out to fans at Friday’s season-opening meets. Fans can grab a poster of Sha’Carri Richardson featuring her iconic pose as she crossed the finish line at the 2019 NCAA Championships in a blazing 10.75 seconds on her way to setting the collegiate record. A 2020 poster featuring eight of LSU’s student-athletes with the full 2020 schedule will also be given out. Both posters will be available starting at 1 p.m. inside of the Carl Maddox Fieldhouse.

You can pick one up at our home meet on Friday (Jan. 10) beginning at 1 p.m. while supplies last.#GeauxTigers pic.twitter.com/AlVQOzJIOF

2020 posters have arrived! You can get them at any of our five home meets this season or you can order them online at https://t.co/QiIz0eK0P5.