Practice Pays off for Trendon Watford at the Line, in Crunch Time 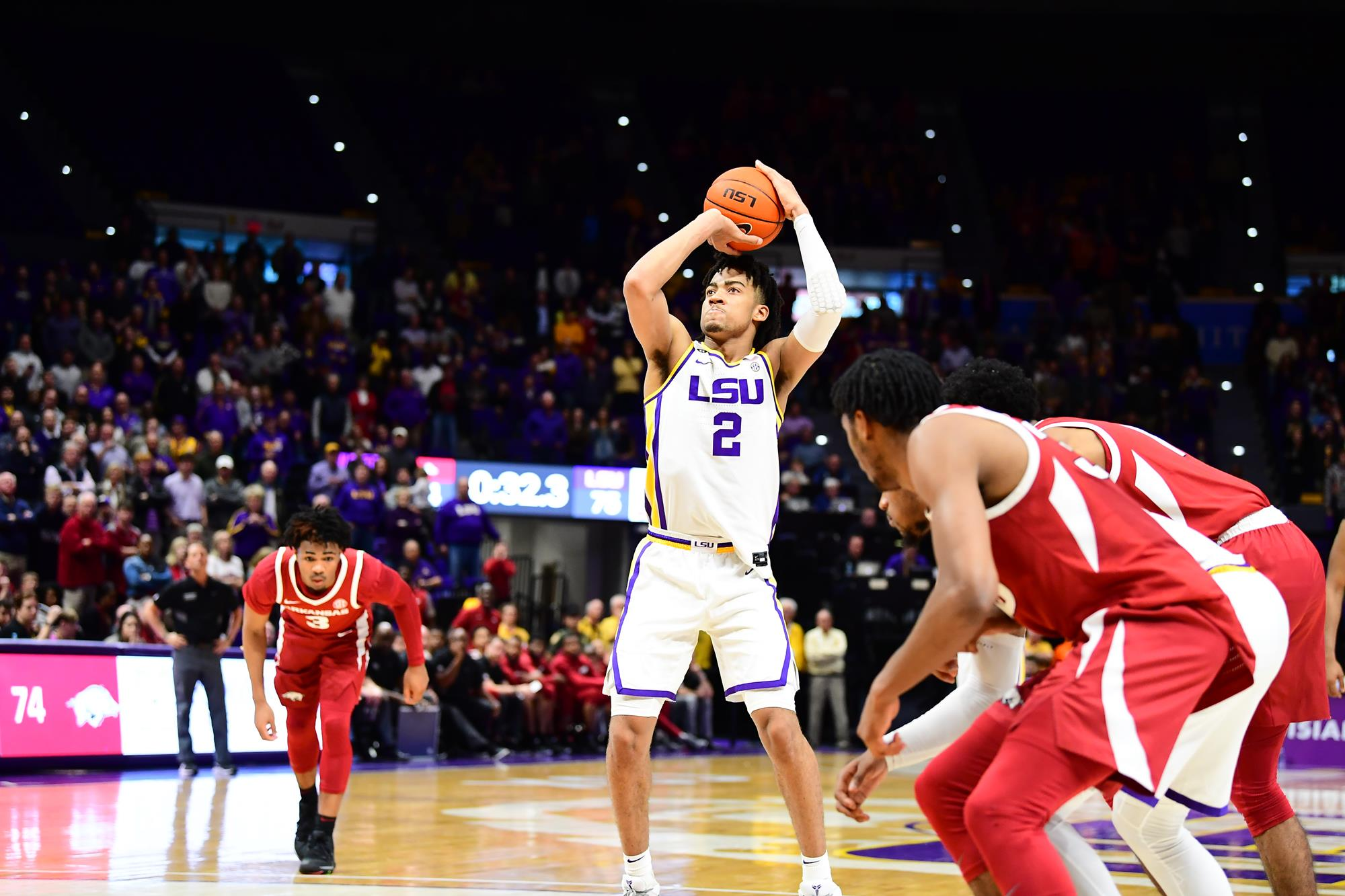 Trendon Watford watched anxiously as the ball flew through the air, his follow through held high above his head and his hopes even higher.

He had to make this free throw. If he didn’t, it was going to be a long afternoon.

Hours before Watford converted two three-point plays in the final seconds of LSU’s 79-77 win over Arkansas on Wednesday night in the Pete Maravich Assembly Center, Watford was nearing the end of a routine he’s just about got down pat, by now.

For several weeks, the freshman forward and hero of Wednesday night’s win – 21 points, 9 rebounds, seven makes in eight trips to the line, and the final six points for the Tigers to claim the win – has finished every practice and shootaround the same way.

With Will Wade rebounding, Watford must make 22 of 25 free throws. If he doesn’t, he has to go to the other side of the gym and make 22 of 25 on the other goal. And no matter what happens, he must finish with 9 out of 10 makes.

“Probably for the first three or four weeks we did it, I don’t think he made 22 out of 25 once,” Wade says. “Now, the last week or so, it’s been surprising when he doesn’t.”

It was no surprise, then, that Watford buried the crucial free throws Wednesday night. He’d made 22 of 25 earlier in the day during shootaround. Weeks of perfecting his routine, his breathing, mastering his body and his mind, paid off in a big way.

When he buried the final dagger of the night – giving the Tigers a 79-77 lead with 8.2 seconds left – he put his head down and pressed his palms to the floor, a gesture that communicated, Calm down. I got this.

His practice had paid off.

Trendon Watford was not losing that game. pic.twitter.com/reOV2Q4DI1

“Me and Coach Wade get together after every practice and shoot 50 free throws,” Watford says. “I’ve got to end making nine out of ten, so a lot of pressure builds up on me in practice everyday. I definitely have to thank (Coach Wade) for working with me. I wasn’t shooting them good earlier in the year, so he’s definitely working with me, and it’s paying off.”

The free throw line is just one manifestation of Watford’s continued improvement and maturation, but it’s a telling one. After entering SEC play shooting below 60 percent from the line, Watford sunk five of six against Tennessee and seven of eight against Arkansas, bringing his season mark up six percentage points in just two games.

He’s getting better everywhere else, averaging 16.0 points and 8.8 rebounds per game in LSU’s last four contests, including Wednesday’s career-high 21 point effort against the Razorbacks. Against Arkansas’ five-guard lineup, Watford was an obvious mismatch, drawing eight fouls on the night and driving to the rim relentlessly.

It wasn’t all smooth sailing, though. Watford had two cracks at go-ahead buckets in the final few minutes, missing one easy layup and coming up short on one dunk.

Wade didn’t waver in going to his versatile forward, though.

“For Trendon to miss the dunk and miss the bunny a couple minutes before that and both of them would have given us the lead – for him to do that and come back and make those winning plays and then have the poise to knock down the free-throws after the big plays is tremendous,” Wade says. “I’m very, very proud of him.”

Watford wasn’t the only forward with a huge night for LSU. Darius Days spearheaded a Tiger assault of the glass, scoring 16 points and pulling down 16 rebounds, as Wade’s squad outrebounded Arkansas an astounding 53 to 24 and scored 26 second chance points to Arkansas’ zero.

Add in 19 points from the efficient-as-always Skylar Mays and two blocks on the final play of the game from Charles Manning, and the Tigers found the recipe for a critical conference win against a team that had yet to lose in regulation.

“Obviously Trendon made some tremendous play down the stretch and finished them off at free throw line and Charles Manning with two huge defensive plays at the end of the game,” Wade says. “I’m very, very proud of our team.”