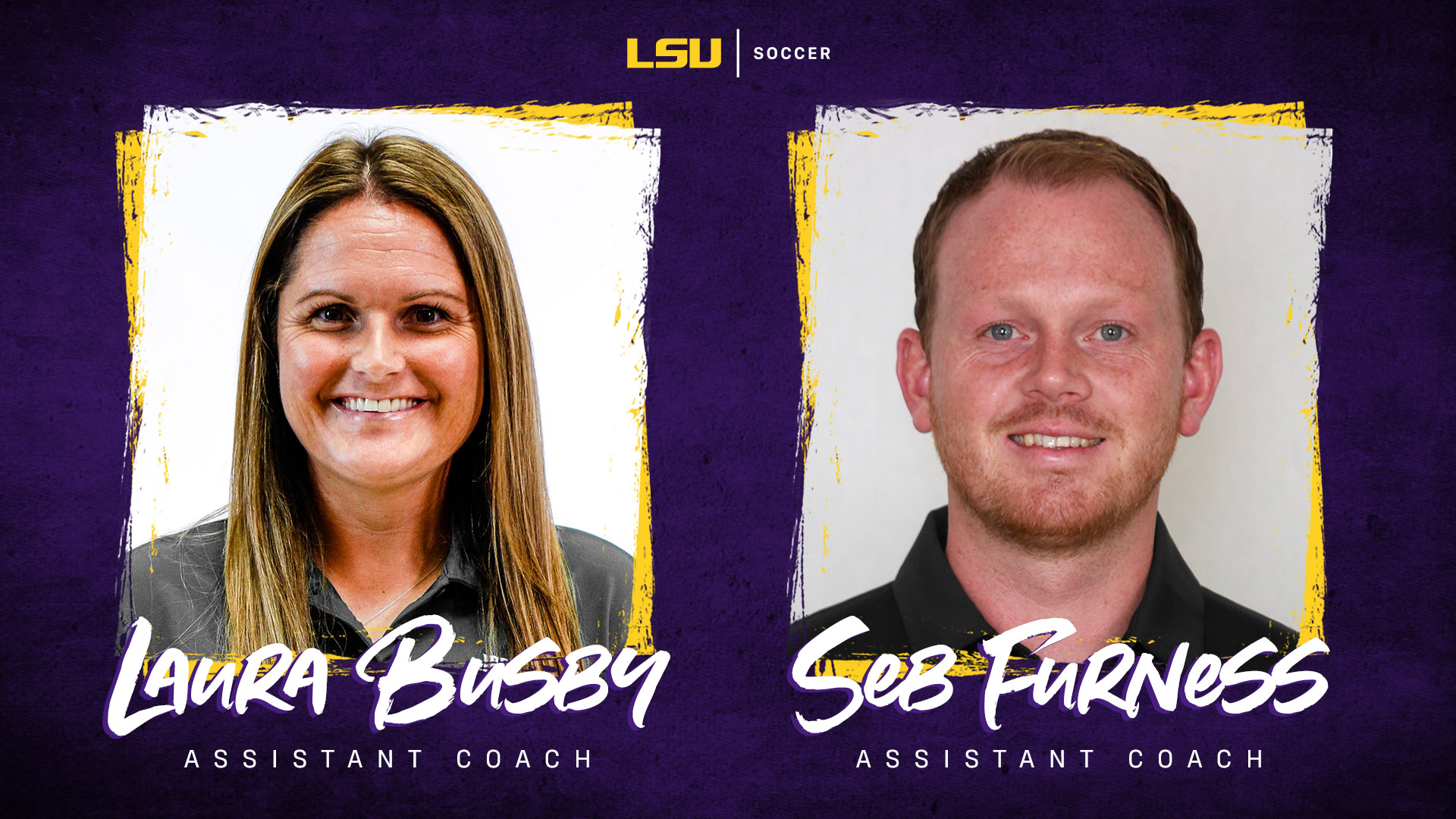 “I’m excited to be adding Laura and Seb to my coaching staff,” Hudson said. “They are both fantastic coaches, but more importantly, they are exceptional people with great character and high standards. Laura’s eye for talent, tactical awareness and ability to be a female mentor for our players are some of the key components she will offer. Seb is one of the best collegiate coaches with goalkeepers, and he will also work closely with the defensive unit on the pitch while focusing on game analysis and recruiting off of it.

“Having worked with both coaches in various capacities in my time in Colorado, I know we will be able to hit the ground running as we have developed an understanding of our coaching vision, recruiting philosophy, and the high emphasis we all place on team culture. I look forward to welcoming Laura, Seb, and their families to the LSU community as we embark on a new chapter for LSU soccer.”

Both Busby and Furness have a high acumen for the sport of soccer. Their knowledge of the game paired with playing skills, as both played collegiately and professionally during their careers, will pay dividends for the LSU soccer program. Busby, an All-American forward during her playing days at West Virginia, will focus on LSU’s offensive tactics while honing the skills of LSU’s attackers. Furness will share his insights on goalkeeping with LSU’s keepers while working with the defensive crew to thwart opposing offenses.

“I’m extremely grateful for the opportunity to be a part of the LSU soccer staff,” Busby mentioned. “After having a chance to tour the facilities with members of the athletic department, the overwhelming support was palpable. My husband and I felt like we were instantly part of a family so steeped in tradition. Sian is a mentor to me who I trust and respect in the game, and it’s an honor to work alongside her. I have no doubt that our staff will put in the work necessary to make the LSU community proud.

Busby played under Hudson during the 2014 and 2015 seasons as a member of the Colorado Pride semi-pro team in the W-League. Hudson was an assistant in 2014 before taking over as the head skipper in 2015. The Pride won the conference title in 2015 and Hudson had four of her players drafted into the National Women’s Soccer League in her two years with the Pride. Four of Hudson’s players off the Pride’s roster played professionally overseas, and four members were named to the national teams for Australia and the United States for the 2016 Olympic Games and 2016 FIFA U20 World Cup. The Pride beat the Seattle Sounders for the 2015 West Conference Championship before falling to the Washington Spirit Reserves in the national championship.

Hudson and Busby teamed up as coaches for the first time in 2017 at the University of Colorado at Colorado Springs and helped the Mountain Lions advance to the NCAA semifinals with a closing record of 17-5-1 on the season. The 2017 UCCS coaching group was named the Regional Staff of the Year in the South Central Region as they helped a UCCS program that went 3-12-1 in 2016 prior to their arrival to the aforementioned 17-5-1 record in 2017, and they captured the Rocky Mountain Athletic Conference tournament title for the first time in program history that season as well.

Busby comes to Baton Rouge after serving as the head coach at Jacksonville University the past two seasons. During her time in Jacksonville, Busby helped Sarah Alexander (2018) and Olivia Abdallah (2019) to the Atlantic Sun All-Freshmen teams. Abdallah led the Dolphins in goals in 2019 with five on the season becoming the first freshmen to lead Jacksonville in scoring since 2014.

Busby had her first collegiate coaching position only a year and half removed from her playing days at West Virginia (2001-04). She was an assistant coach at Purdue University for three seasons (2006-08) before moving to Bucknell University as an assistant coach from 2009-11. She was a member of the Purdue coaching staff that helped the Boilermakers to the Big Ten Tournament title in 2007.

Busby, a native of Pottstown, Pa., graduated with her bachelor’s in physical education from West Virginia University in 2004, and then earned her master’s in athletic coaching education from WVU in 2005. She earned four letters for the WVU women’s soccer team from 2001-04 helping the Mountaineers to the NCAA Tournament in each of those years. She was a two-time NSCAA Scholar All-American in 2003 and 2004, and she earned NSCAA Third Team All-America honors during her senior season. She scored a total of 31 goals, 15 of which were gamewinners, and registered 23 assists during her four-year career for a total of 85 points. After her collegiate playing days, Busby turned professional and played for Pitea IF in Sweden. She also played in several semi-pro leagues in the states with the Chesapeake Charge and Colorado Pride. She was named the 2013 Women’s Pro Soccer League All-East Player of the Year as a member of the Charge.

Furness will make the move to Louisiana from Colorado State University where he has spent the last the last four seasons (2016-19) as an assistant coach while working with the goalkeepers and defensive unit. Off the pitch he acted as the program’s scout man and film analyst going through troves of tape on the opposition to provide his players with scouting reports.

“I want to express my thanks to Sian and Dan Gaston for this wonderful opportunity for my family and I,” Furness mentioned. “I would also like to give thanks to Bill Hempen and the CSU administration for their tutelage and guidance over the past four years.

“The pride, passion, and commitment to success that I experienced at LSU was both inspirational and contagious the moment I stepped on campus. It is a great privilege to become a member of the LSU community. I feel that my values align with Sian’s and I cannot wait to begin working to build the necessary relationships with both the players, staff, and community to make that vision a reality.”

The Rams showed improvement each year that Furness was with the program. In his debut season on staff, Colorado State allowed 36 goals and that number was lowered in each of the next three seasons; the 2019 season saw the Rams give up only 15 goals.

In 2019, Furness guided sophomore goalkeeper Gabi McDonald to a career year that helped the Rams secure their best record in program history. McDonald made 108 saves on the season to go along with a save percentage of .879 to rank No. 10 in the NCAA in that category. The Rams finished the season with a goals averaged against number of .715 which rated as the 25th best in the nation. McDonald had nine shutouts on the season and became the first keeper in program history to earn Mountain West First Team honors and be named to the United Soccer Coaches All-Pacific Team. McDonald set a total of seven single-season CSU records during the 2019 campaign under the tutelage of Furness.

Furness worked with keeper Hunter Peifer during the 2017 and 2018 seasons and helped her become the program’s all-time shutout leader with 11. She was named to the Mountain West All Newcomer team in 2017 becoming the first CSU player to be named to the all-conference squad.

A native of Middlesbrough, England, Furness has been immersed in the sport of soccer his whole life. Growing up he was a member of the Middlesbrough FC. A goalkeeper himself, he played in semi-professional leagues in Northern England before travelling to the states to play at West Texas A&M University from 2008-11. In 2009 he helped his squad to a regional title while racking up the highest save percentage (.889) in all of NCAA Division II soccer that season. Furness played professionally for Tindastoll FC in Iceland for a year and a half before getting into coaching.