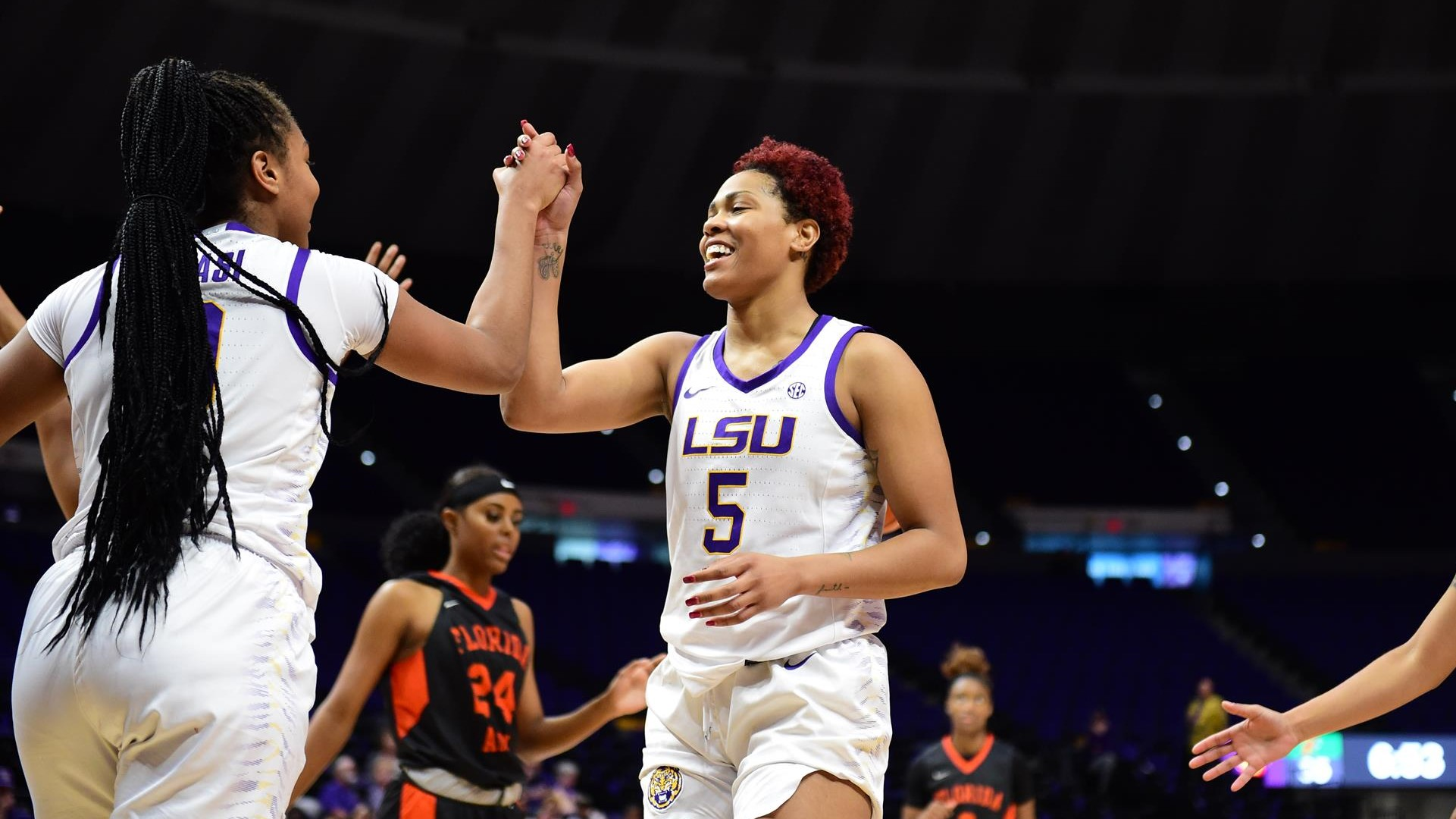 While Mitchell got the Tigers rolling to start the game, junior transfer Awa Trasi came off the bench and scored 16 points, the only other LSU player to score in double figures. Mitchell was 8-of-9 from the field and was the leading rebounder, along with junior Faustine Aifuwa, with seven boards each. Trasi also had five rebounds. Junior point guard Khayla Pointer came through with six rebounds, four assists, three steals and two points.

LSU will tip off SEC play and the New Year on January 2 against Alabama at 7:40 p.m. in the PMAC. The game will be broadcast on SECN+ and live stats will be available.

On a good, well-played win with maybe a few too many turnovers…

“Yeah I thought that our team did a nice job of just playing together like a unit. When we decided to take care of the basketball, we shot a really good percentage but that’s expected when you’ve been off for 4-5 days there. We needed to get the kinks out, but I’m pleased with our overall effort and pleased with the minutes that we were able to distribute amongst the team on the bench. We got some really good productive minutes, especially out of Awa. She did a nice job of coming in and being the scoring threat for us, shooting the ball from the three but her power game looked good. Another thing we’ve got to clean up is our layups and free throws. With our layups, the number of them that we missed, they were some easy layups and we’ve got to be better in that area. I liked the intensity that we played with, I liked our defensive pressure and we just stayed together as a team.”

“We talked about her stat line and I said, ‘how’d you miss that one shot?’ and she said, ‘I don’t know Coach, it just didn’t go in,’ so she does so many great things for our team. She’s a rebounding machine, she can rotate over, she takes charges, she plays defensively away from the perimeter. So she gives us a chance to play away from the perimeter. We love when she’s in there stealing the basketball and taking the ball from different people and starting our breaks. She gives us that transition game.”

On Ayana hitting the three from a new spot (her first of the season, 8th of her career)…

“Yeah, after practice she’s been working on it. She’s been spending time on her three ball in five different spots and that’s really her sweet spot coming in that trail but off-center there in that sweet spot is where we had a high-wing in there. She’s done a really nice job of knocking down threes in there.”

“Awa is a very versatile player and she’s still learning but I like when you can run high ball screen-action and can put Pointer in it. A lot of people pay attention to Pointer but then she can become the recipient of the playback action and we’re able to play back to her and her ability to shoot the three is pretty impressive. We like the fact that she’s also a player that can a not only shoot the three, but she can also give us a presence in the paint and she has a nice face-up jumper, as well. She’s just added so many dimensions to her game which makes her hard to guard.”