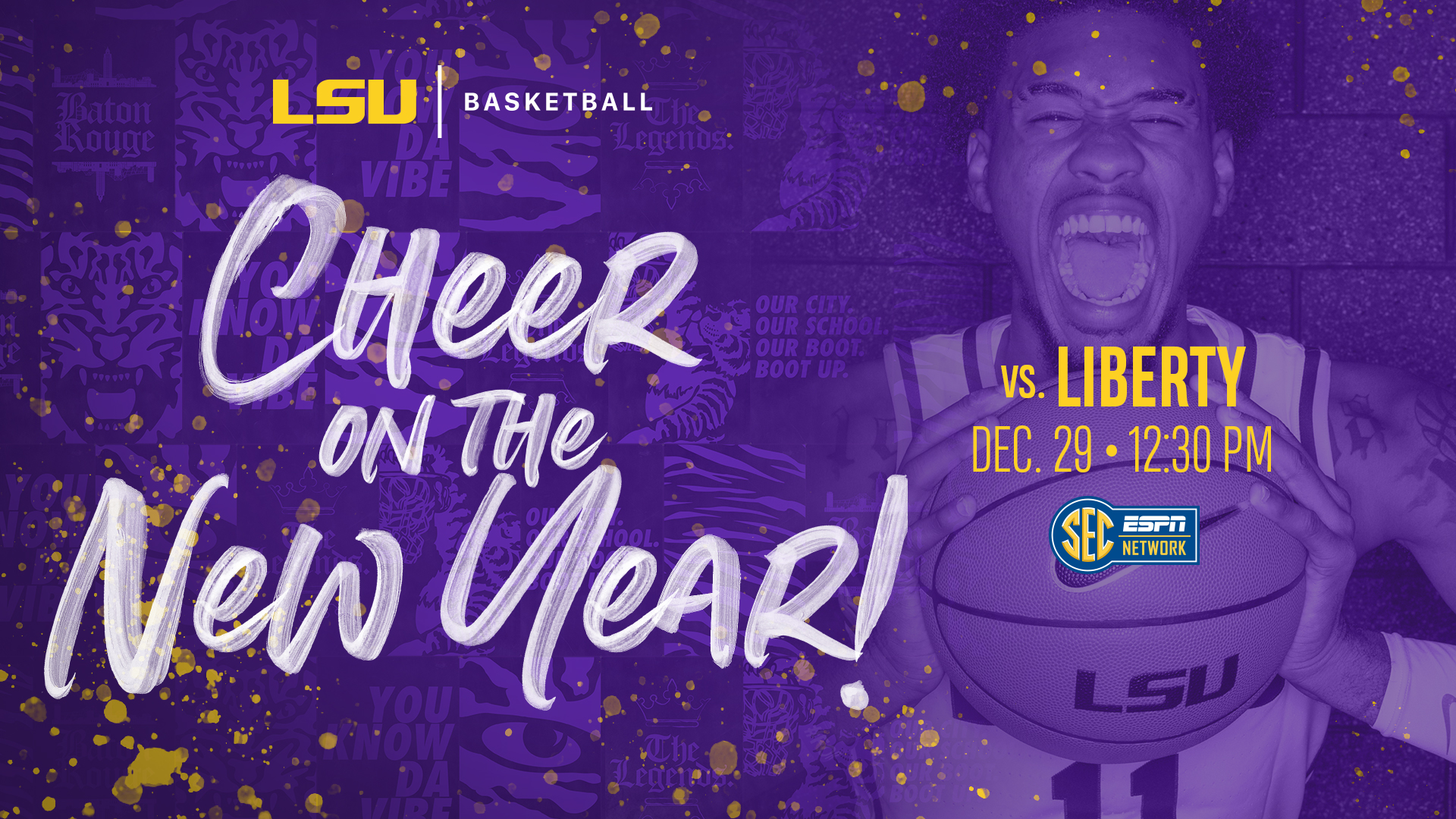 BATON ROUGE – For the second straight December, the LSU Tigers will host one of the last undefeated men’s basketball teams Sunday afternoon when the 14-0 Liberty Flames come to the Pete Maravich Assembly Center.

The game is set for 12:30 p.m. and is the first game of a tripleheader of games to be broadcast on the SEC Network. Richard Cross and Andy Kennedy will be in town for the broadcast. The LSU Sports Radio Network will also have the broadcast with Patrick Wright and former LSU head coach John Brady on the call.

Tickets are available all day Saturday online at LSUTix.net and beginning at 11 a.m. Sunday at the upper concourse ticket windows of the Maravich Assembly Center. There is a $5 ticket deal for the game in which fans can be a student again by purchasing $5 tickets and sit in the lower bowl student section.

Also the first 4,000 fans will receive a limited edition Heisman poster featuring LSU quarterback Joe Burrow. The posters will be available at the main entrances of the Maravich Center. Post-game kids 12 and under will be allowed on the basketball court to shoot free throws.

It was the Friday before Christmas one year ago when No. 24 and 12-0 Furman came to Baton Rouge for a game and the LSU Tigers came away with 75-57 victory.

Now LSU faces one of three undefeated teams in Division I (Auburn, San Diego State) in Liberty, coming off wins in the Holiday Hoops event in Washington D.C. against Towson (66-54) and Akron (80-67). In the game prior to the tournament, the Flames won at Vanderbilt, 61-56.

This will be the fifth of seven consecutive games away from the Liberty campus in Lynchburg, Virginia in which the Flames will play in six different states, including their first two ASun conference games

The Flames are receiving votes in both polls and is currently No. 17 in the NET rankings. Liberty is ranked No. 2 in the country in scoring defense, allowing just 51.6 points per game.

Two seniors lead the team in scoring with Caleb Homesley averaging 11.3 points per game and Scottie James at 10.3 points and 7.6 rebounds per game.

LSU (7-4) will be looking to break a two-game losing streak after a 70-68 loss in Los Angeles to USC, the Tigers third loss this season by two points.

Skylar Mays had 21 points in the game, while Trendon Watford played one of his best overall games with 17 points, 10 rebounds and four assists. Darius Days had another double double with 12 points and 11 rebounds.

Mays continues to lead the team in scoring with 16.2 points a game while Emmitt Williams, who was saddled with foul trouble and limited to 17 minutes, is at 14.5 points. Days averages 13.1 points and a team high 8.2 rebounds, while Watford is at 12.9 points and Javonte Smart is at 10.1 points and 5.1 assists.

The Tigers are averaging 81.7 points a game, while giving up 68.7, while Liberty as mentioned gives up just over 51 points a game and has a scoring margin of over 20 points a game.

LSU will open SEC play on Jan. 4 at Tennessee before playing its first home SEC games against Arkansas (1/8) and Mississippi State (1/11). Tickets are available for all SEC games at LSUTix.net.