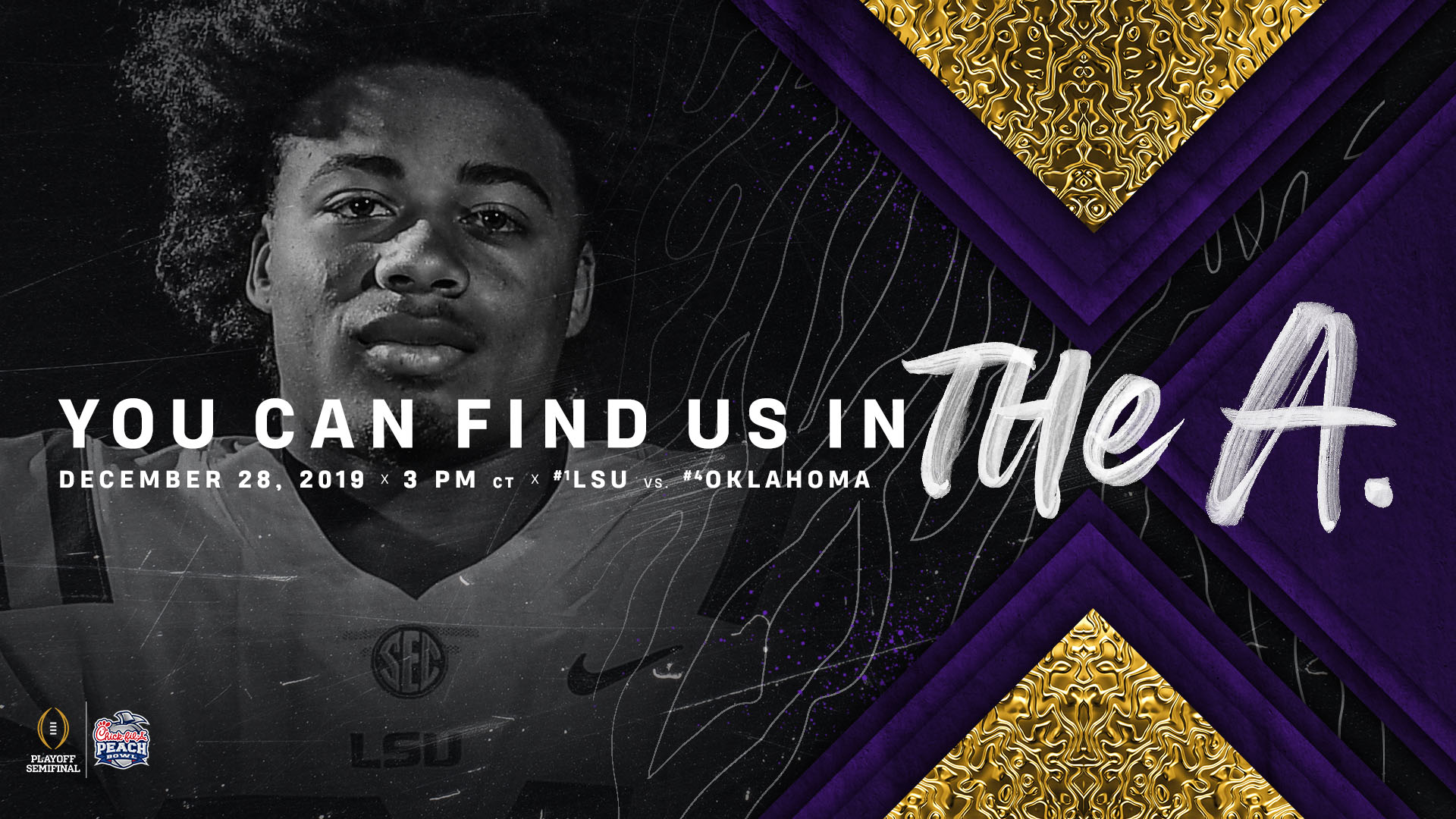 ATLANTA – Top-ranked LSU makes its first appearance in the College Football Playoff on Saturday, as the undefeated Tigers take on fourth-seeded Oklahoma in the Chick-fil-A Peach Bowl.

Kickoff from Mercedez-Benz Stadium is set for 3 p.m. CST. on ESPN and the LSU Sports Radio Network. ESPN will cover the game on multiple channels as part of the its CFP Megacast, including the LSU Hometown Radio call on the SEC Network.

The Tigers (13-0, 8-0 SEC) return to the field for the first time since defeating Georgia, 37-10, in the SEC Championship game on Dec. 7, their fifth top-10 win of the season and first SEC title since 2011. It’s LSU’s third all-time matchup with Oklahoma, whom the Tigers knocked off in the 2004 BCS National Championship Game in New Orleans.

Burrow, who won the Heisman Trophy by a record margin, is on pace to set a new record for completion percentage (77.9 percent) and passer rating (201.5). He also leads the nation with 48 touchdown passes and ranks second with 4,715 yards.

Hornung Award finalist and unanimous first team All-SEC running back Clyde Edwards-Helaire is a game-time decision for LSU after picking up an injury during playoff preparation. The junior has racked up 1,290 yards and 16 touchdowns on the ground this season, and he’s set an LSU record for receptions by a running back, grabbing 50 catches for 399 yards and a score. If he’s unable to play, the Tigers will rely on freshmen Chris Curry, Tyrion Davis-Price and John Emery Jr. to fill in.

“All three of them have different talents,” says head coach Ed Orgeron. “They’ve matured. The game’s have gotten them ready. John’s improved on the things he had to improve on. Tyrion is a big bull. He’s very physical. Chris Curry has learned the offense and can go in there and give us some plays. So I think all three have improved, but they’ll have to play very well, if they play, against a very stiff Oklahoma defense.”

“He runs the ball like a big tailback back there and also throws the ball well and also has come back from a deficit to lead his team to victory,” Orgeron says of Hurts. “I do believe he’s a great leader.”

Hurts’ favorite target is Louisiana native CeeDee Lamb, who has tallied 1,208 yards and 14 touchdowns and was a finalist alongside Chase for the Biletnikoff.

LSU’s defense has been at its best late in the season, giving up just two touchdowns in its last two games. The Tigers are allowing 21.2 points per game, 25th nationally, and 5.04 yards per play, 26th nationally.

It’s LSU’s first trip to the playoff, and the dynamic of a combination playoff game and bowl game adds a new wrinkle to preparation. But Orgeron feels his team is as ready as ever to take its shot at a national title game appearance.

“We’ve come to a playoff game, not a Bowl,” he says. “I do believe we’re going to play loose if it’s any indication of the way they’ve been all week. They’ve been loose all week. They’ve had great practices. I don’t think the pressure of a big-time game is going to get to these guys. They have great leadership. But we’ll see. You never can tell until the game comes.”